I spent the first eighteen years of my life in Northamptonshire where there was a church called the St Nicholas Owen. It says a lot about me that I never once wondered who St Nicholas Owen was. But then in my defence there were an AWFUL lot of saints and I didn't have access to Wikipedia at the time.

Anyway, I now know that Nicholas Owen was a courageous little man who built priest holes in Catholic houses during the time of Elizabeth I and James I. Baddesley Clinton, a lovely moated manor house in Warwickshire, was one of those houses. 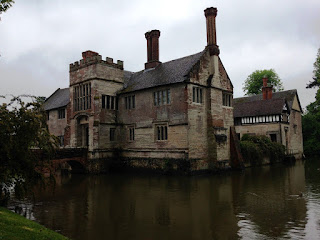 In fact, Nick built priest holes all over the place. He was arrested in 1594 and was tortured, but refused to reveal any details about his work. In 1606 he was arrested again and taken to the Tower of London, where he was tortured again on the rack. It killed him and he was canonised in 1970.

You can still see the priest holes at Baddesley Clinton. I loved the way the fantastic guides all said "there are three that we know of", as if Nicholas was so cunning that some of his hidey holes are still hidey today, even after hundreds of years of renovation works and general poking about. This is the one in the kitchen: 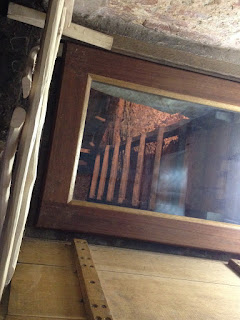 But Baddesley Clinton's amazing history began before the Reformation and the need for priest holes. Let me give you a quick run-down of some of its inhabitants:

1. John Brome - murdered!
There has been a manor house at Baddesley since before the Norman Conquest. In 1438, it was bought by a lawyer called John Brome. He was murdered in a church doorway in London by a man called John Herthill during a quarrel over property.

2. Nicholas Brome - murderer! Twice!
John's son, Nicholas, avenged his dad and murdered John Herthill in 1471. He then killed AGAIN - one day he found the local priest flirting with Mrs Brome, so he murdered him. To make up for his crimes, Nicholas built the tower at the nearby church.

3. Henry Ferrers - friend of Catholics!
The Ferrers family took ownership of Baddesley in 1517, through the marriage of Sir Edward Ferrers to Constance Brome. In the 1560s, their grandson, Henry, inherited. He was known as The Antiquary because of his love of history, but what is most interesting about him is that he leased Baddesley out to the Vaux sisters, two fervent Catholics who used the place to harbour Jesuit priests. This was a treasonable offence at the time and the punishment for treason was to be hung, drawn and quartered, which was not very pleasant. Not only that, Henry also leased a place in London to Thomas Percy, one of the Gunpowder crew, who actually stored the gang's gunpowder there! Henry must have had friends in high places to have got away with this, but he did and he died aged 84.

4. Marmion, Rebecca, Georgiana and Edward - the Quartet!
Marmion Ferrers inherited in the 1830s but he and his wife Rebecca were not well off at all. In 1869, Rebecca's aunt Georgiana and her husband, Edward Dering, came to live at Baddesley and it was their money that was used to keep the place going. The four became known as 'the Quartet', until Georgiana and then Marmion died, and then Rebecca married Edward.

5. Greycat!
When I heard about "the legend of Greycat", I was expecting him to have solved a murder case, or to have saved the lives of 15 priests. In fact, his claim to fame involved him accompanying Mr Ferrers-Walker on his walks. And he lived to be 21. Which is admittedly quite impressive.

The Baddesley scone
And so we come to the difficult bit. Before I tell you what happened with the scone, I need to clarify two things:

1. I'm one of those people that never complains in restaurants. I have sat there on numerous occasions boring my companion to death about the substandard food and yet when the waiter came to say "everything ok?" I've said "YES! FANTASTIC! THANK YOU!" Maybe it's because I am British. Or maybe it's because I am an idiot.

2. This was my 82nd National Trust scone and I've never even thought of rejecting one before now.

So when I say that I couldn't eat the scone because it was stale, I hope you know that I had very good reason and I'm not just trying to be controversial. 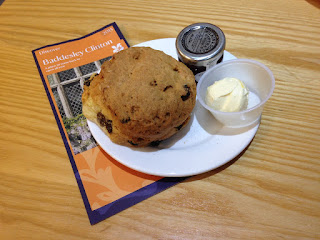 The staff, however, were LOVELY about it and hastily got some replacements. They'd been microwaved, which makes scones soft and squidgy, but they tasted a lot better.

I am going to finish by telling you how much it troubles me that it took 364 years for Nicholas Owen to be made a saint. 364 years! WHY? Surely a miraculous deed is a miraculous deed! There is currently no patron saint of scones and I will be a shoe-in for the role once I have completed my National Trust scone odyssey. I've still got around 150 scones to go but clearly I should get my application in.

Baddesley Clinton: 5 out of 5
Scones: 3 out of 5 for the replacement scone
Priest holes: 5 out of 5
Posted by National Trust Scones at 11:38