I don't suppose there are many people in the world who would attempt a day trip to Middlesbrough from London, apart from football fans and scone bloggers. But that's what I did today: a 480 mile round-trip for a National Trust scone.
Back in January, I'd looked at the list of places I needed to visit in order to finish the National Trust Scone Quest and two thoughts came to mind:
1. I only have 24 properties to go - I will SURELY complete the task this year
2. Those 24 properties include one in North Yorkshire, one in Snowdonia, one in Essex and three in Cornwall. How did I let this happen?
What made it even more troublesome was that Ormesby Hall near Middlesbrough seemed like an understated kind of place. It didn't claim to be involved in any major historical event, like Moseley Old Hall, or have a scandalous past like Seaton Delaval.
But if I've learned one thing over the past 9 years of this project, it's never underestimate a National Trust property. 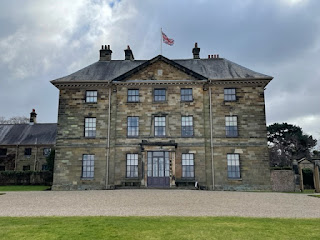 To summarise: I absolutely loved Ormesby Hall. There are many reasons for this: the homeliness of the place, Ruth Pennyman and her headscarf, the tea-room inside the house, the surprise model railway, all of which you can read about below.
But before I get onto the history, I'm going to give a mention to the volunteer guides. There are some properties where you just strike lucky with entertaining, informed, passionate guides and the ones at Ormesby were brilliant. There was no guide book, so I had to try and learn as much as I could from them and they didn't let me down.

Ormesby - owned by the Pennyman family

The Pennyman family lived at Ormesby for over 400 years, although the present house was built in the 1740s. They sound like an interesting bunch, always on the wrong side of things: Robert Pennyman had been executed in 1569 for his part in the Pilgrimage of Grace against Henry VIII. They were Royalists in the 17th century, with William Pennyman (the 1st Baronet) fighting for the King at the Battle of Edgehill in 1628.

The 'Wicked' Pennyman bankrupts the place

James, the 'Wicked' 6th baronet, was a gambler who landed the family in bankruptcy. The guide told me that he had inherited £25m in today's money but it was soon gone. The contents of the house were sold off and the place was shut for almost 20 years. His son William managed to get it back on its feet - when he died without children the estate passed to his aunt and her family, while the baronetcy became extinct.

The last Pennyman to inherit Ormesby was James Beaumont Pennyman. His first wife died in childbirth and in 1926 he married a woman called Ruth Knight. I knew I liked Ruth from the minute I saw her portrait: 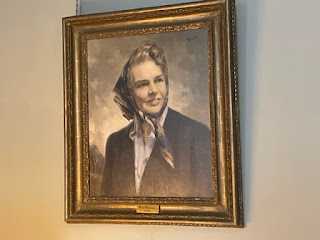 How many women would choose to sit for a portrait in a head scarf and blazer? She was obviously brilliant. I knew she was the kind of woman who got things done and I wasn't wrong - there were notices everywhere explaining how the couple had very different interests and political viewpoints but together they had set up schemes for unemployed miners. She was also very fond of the arts - visitors to the house included everyone from Sybil Thorndike to Ewan MacColl.

Before I move on to the all-important scone, I have to tell you that Ormesby Hall had a final flourish up its sleeve. It doesn't happen very often but occasionally you wander into the last room of a house thinking 'well, that was all very nice', expecting nothing more than a basket for your visitor surveys and an exit door with a handle that needs twisting a bit.
At Ormesby, I wandered into a final room to find an enormous model railway. In the middle of the railway was the nicest man in the world. He told me that Ormesby had decided to use the space to offer something to younger visitors and that a man had donated a fantastic model railway that had taken him 35 years to create. "To be honest, this ended up being something the adults love," he added. "So we put Thomas the Tank Engine next door." He pointed out the bits of the railway that were particularly relevant to the NT - Corfe Castle is in it, for example.
At that point, some other visitors wandered into the room so I thanked him and turned to leave. "Are you not going to see Thomas?" he said, sounding disappointed. I will admit that my heart sank a bit. I didn't want to be rude but I imagined that the room would contain a toddlers' table with some colouring pencils and books. But he had been so very lovely - I decided I would go and admire the crayons for him.
Reader, I was wrong. I have never been more surprised at the contents of a National Trust room. There in front of me was another model railway containing four trains, of Thomas and his friends. You could choose which button you pressed to set each in motion. My mind was blown, so a real fan of Thomas the Tank would probably have exploded with excitement.
It was so good, I just spent 30 minutes working out how to upload a video onto the National Trust Scone Blog so I could share it with you.

But let's move on to the scone. I have to tell you that I've never met a National Trust tea room I didn't like. Team rooms fitted into stables or other out-buildings? Love the quirkiness. Large new-build cafeterias? Love the space and modern conveniences. Tea rooms located inside the house, thus allowing you to pretend you live there? Saddle up my second-best horse, Jeeves, I want to inspect the ha-ha after tea.
Ormesby falls into the latter category. It has been fitted into the kitchen area of the house and the service area is relatively small. Having been to two large modern tea spaces this year, I started to worry. I worried even more when they charged me £6.20 for a cream tea - ie the same as East Riddlesden the week before, where they seemed to have better facilities. What if this turned out to be a 'good effort with limited resources' type of scone?
The worrying was for nothing. The scone was absolutely first-rate - very fresh, slightly warm and delicious. I ate every last crumb of it. 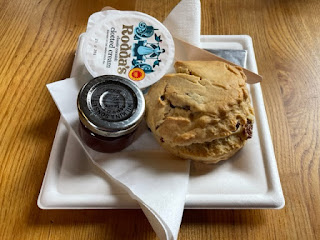 I don't award points for tea room decor but I'd like to compliment Ormesby on providing a tea room that matched my bag: 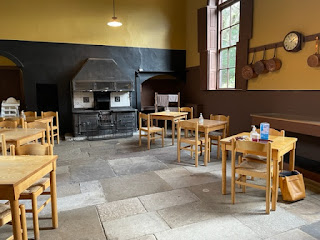 The Scone Blogger has a Walk of Fame called "Houses I Would Live In Tomorrow If The National Trust Would Let Me, And Also Paid The Heating Bills". Ormesby Hall goes straight onto that list, along with Croft Castle, Peckover, Goddards, Sunnycroft, Batemans, Arlington and Hughenden.
I will end by saying that every time I tweet about scones at the moment I feel a bit uneasy. Like everyone, I spend a lot of time reading and worrying about Ukraine. I know that scones are trivial compared with being bombed, killed, forced from your home. But all I can do (apart from donating to the Disasters Emergency Committee, which supports 15 UK charities in getting aid to the Ukrainian people) is to keep going. During those 14 hours on the road yesterday, all I could think about was how I had the freedom to travel from one end of a much loved country to the other and how one day the Ukrainian people will once again be able to do the same. Let's make sure that day comes soon.
Ormesby Hall: 5 out of 5
Scone: 5 out of 5
Thomas the Tank: 5 out of 5
Posted by National Trust Scones at 04:41