How often are we able to say "he was really bad at baking" about a member of the royal family? Is Prince Charles a dab hand at a clafoutis? Does Princess Anne bake the best clootie dumpling south of Gretna? We don't know, even in these times of social media and 24/7 news channels. But we do know that Alfred the Great, born in 849 and 33rd great grandfather of Charles and Anne, was rubbish in the kitchen.

The story goes that Alfred was on the run from the Vikings and took refuge in the house of a peasant. She asked him to watch her cakes – small loaves of bread – that she had baking on the fire but he took his eye off the ball and the cakes burned. There was no Hollywood handshake for Alfred that day.

This is why I headed to Winchester City Mill with some trepidation. They love Alfred in Winchester - he made the city his capital after he was crowned King of Wessex in 871 - so I wasn't sure if burning baked goods on a daily basis was seen as a way of honouring the great man. 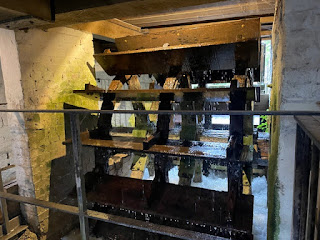 But let's begin with some history of the mill itself:

There has been a mill on this site since Saxon times, possibly stretching back even further to the Roman era. The Domesday Book reported that it was the most valuable mill in Hampshire. From 989 it was owned by the nuns of Wherwell Abbey.

The Mill declines after the Black Death

The plague devastated the population of England and once-productive land was left uncultivated. The poor harvests impacted the mill (known as Eastgate Mill). At the same time, Winchester itself lost its position as capital. By 1417 the mill was derelict.

Queen Mary gifts the Mill to the town

Winchester Cathedral was the venue for Queen Mary Tudor's marriage to Philip of Spain in 1554. In gratitude, Mary gifted the mill to the town and it was renamed the City Mill. I'm not entirely sure how they felt about being given a derelict mill as a thank you for hosting an expensive royal wedding but let's assume it's more generous than it sounds.

In 1743, a man called James Cooke leased the mill and rebuilt it. He retained a lot of the medieval materials but spent a huge amount creating the building we see today. In 1795, JMT Turner painted the mill during a visit to Winchester. There's a lovely story about how this was 'discovered' in 2013 by the mill's assistant manager. He was looking through the Tate's digital archive and found the painting from Turner's Isle of Wight Sketchbook from his student days at the Royal Academy: 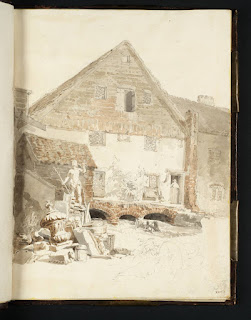 City Mill stops being a mill

The mill remained in use until the early 1900s. It was used as a laundry during WWI but then fell into disrepair. In 1928 it was put up for sale and purchased by a group of benefactors who gave it to the National Trust. It was leased to the Youth Hostels Association in the Thirties and the hostel remained until 2004.

In 2004, City Mill started to produce flour again. This was thanks to 12 years of restoration work. I've said it many, many times on this blog but I'll say it again: we really should put National Trust mill enthusiasts in charge of all the world's big problems. They just make things work. (See also Acorn Bank, Houghton Mill, Anglesey Abbey, Dunster Castle and Cotehele).

I knew that the tea room at the mill was small and I also knew that it hadn't long reopened after lockdown. However, I wasn't expecting it to be takeaway only and I had chosen the worst - and I mean THE WORST - day of the year to visit. The rain was sheeting down in that way where you seriously wonder if it will ever stop (apparently it also rained non-stop on Mary and Philip's wedding day). And let's face it: a cream tea is not the easiest thing to consume on a takeaway basis.

Luckily for me, I had a very resilient companion on this scone mission. The very lovely Helen, better known to many as the handler of Hattie the Otter, lives in the area and came along to the mill with me.

Once it was clear that we couldn't eat our scones inside, we trudged out into the little garden and defiantly ate them in the pouring rain, which is probably the most British thing that anyone can do. The scone was very tasty though and well worth the drenching. 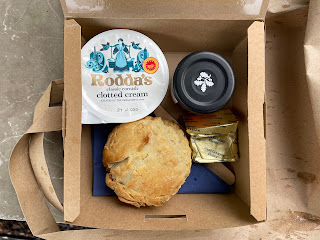 I cannot praise Helen enough - she was a lovely, entertaining and interesting guide and I could not have had a better companion for the day. But - and she must get this a lot - when we greeted each other beneath the looming statue of King Alfred, all I wanted to blurt out was "have you brought Hattie Otter??" I managed to not do that but Helen knows what's what and Hattie was indeed with us.
It was particularly fitting that Helen and Hattie joined me at Winchester City Mill, as it's a hotspot for otters. Back in 1994, three otters were reintroduced to the River Itchen and they've thrived ever since, along with the trout, water voles, kingfishers and other wildlife that can be found. You can watch 'otter footage' at the mill, showing them marauding around late at night.
So there you have it: the National Trust Scone Quest is back, back, BACK and Winchester City Mill was a great place to restart. A big thank you to the lovely Helen and Hattie for showing me around.

Winchester City Mill: 5 out of 5 - especially the fantastic volunteers
Scones: 4.5 out of 5
Fortitude of the Sconepals when faced with eating a scone in lashing rain: a gazillion out of 5

Posted by National Trust Scones at 04:24