It's the final countdown, scone fans! Only 10 National Trust properties to go on this scone quest. East Soar on the Devon coast was one of the final 10 and I knew it was going to be a problem. Firstly, it was the most difficult one for me to get to. But secondly, I HAD ALREADY BEEN THERE. I visited East Soar in 2019 but had been stupidly negligent about its facilities and no scone purchase had been attempted. Luckily for me, I have the support of my friend Kathy. We have been best friends for a long time and have helped each other through our chosen endeavours. Example of Kathy's chosen endeavours: an Ironman triathlon. I watched her doing her huge swim, I cheered her as she sped past me on her bike, and I shouted support as she ran past me several times while completing a marathon. Example of my chosen endeavours: driving around Devon looking for a scone. Yes, I do often wonder why she is friends with me but I am beyond grateful that she has persevered these past 30 years.

Anyway. East Soar is a great place for coastal walks but it also contains a lot of history. There's a very good podcast episode by an archaeologist called Bill Horner who explains how the East Soar National Trust car park was once part of RAF Bolt Head. It played an important role in World War II - its location enabled incoming enemy aircraft to be intercepted.

There's also a lot of wildlife in the area. Highland cattle, Dartmoor ponies and all sorts of other species can be spotted as you walk along: 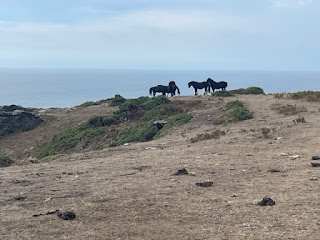 Kathy was on holiday in the area and had done a recce of the East Soar scone facilities during the week. She texted me with some concerns that there might not be any and I had to explain that it didn't matter: the National Trust handbook states that refreshments are available at East Soar and, as I couldn't be 100% sure that they weren't NT, I had to go there. Even if all I found was a hole in the ground, this blog needed to report that the hole contained zero scones. To be fair, she hid her bafflement well.

She didn't hide her National Trust Scone Panic though: as soon as we got to the Walker's Hut, she basically turned into me. I was sanguine about the chances of finding a scone in a barn but she was utterly determined that East Soar would deliver. It was like having an out-of-body experience and watching an action replay of yourself at 200+ National Trust cafes over the years.

The Walker's Hut is located on a National Trust farm and is a lovely little place serving a good array of cakes and drinks. There's an honesty box for the money and you help yourself: 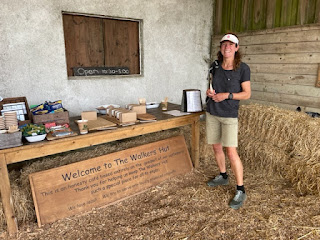 Kathy's determination was rewarded - what I thought were baked potatoes turned out to be scones. It's almost exactly 30 years since we collected our A'level results - frankly, I think she might have been more relieved by today's scone than she was with her 3 As :) 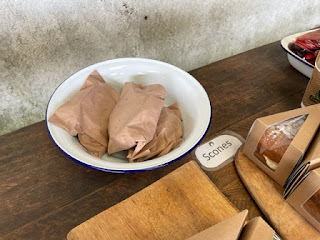 It was a very nice scone as well - light, fluffy and very fresh. Kathy wanted to give it a 4.5 but if you are a regular reader you will know that I have a Crumbleometer that automatically deducts a point if a scone disintegrates into more than six pieces during preparation or consumption. The East Soar scone did fall apart a bit but it was still delicious. 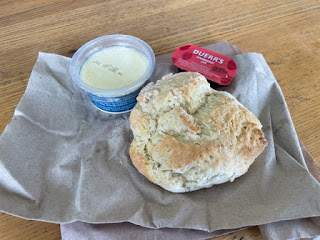 If you'd like to know more about my Devon road trip of 2019 where I probably came within 300 feet of the East Soar scone but failed to realise it at the time, you can read about nearby Overbeck's (also starring Kathy), as well as Cotehele, Lydford Gorge, Buckland Abbey, and Antony. We even stopped at Wembury and South Milton Sands, even though I knew we probably wouldn't find any National Trust scones on the beach (I was correct).

Only nine scones to go!

Posted by National Trust Scones at 12:47