I think I was in my late 20s when I developed an unexpected passion for Countryfile. It's not the rare breeds of sheep that I love, nor the farmers finding a lucrative sideline in making crisps out of turnips. It's the people they interview - the people that have devoted their ENTIRE LIVES to protecting a certain species of moss, or a specific type of bat that I've never even heard of.

And I know what you're thinking. You're thinking: "But Scone Blogger! You yourself have selflessly devoted your ENTIRE LIFE to a noble cause - the noble cause of scones!" To which I reply: "This is undoubtedly true, and at times it is very challenging, but sitting in tea rooms eating jam is not the same as standing in a freezing barn with a torch, looking for a colony of greater horseshoes that might not be there".

ANYWAY. I mention this because Greyfriars House and Garden in Worcester would 100% be a car park today if a group of extremely determined individuals had not devoted their lives to opposing the council and saving it from destruction. 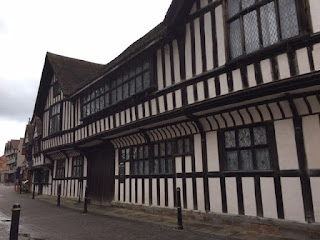 Greyfriars - the happier history:
But then came tough times:
The Moores to the rescue:
Other things I learned today that I didn't know:

But onto the bad news. I'm afraid I let you all down on this scone mission. Greyfriars did have a little tea room and they probably had scones, but I didn't stop for any. They were short-staffed and not really supposed to be open on a Monday and, well, I just couldn't face being the only one dinging a little bell for service and demanding that someone come running to bring me tea. I know. Pathetic.


So I basically need you all to go to Greyfriars and do my job for me - let me know how you get on?

Greyfriars House: 5 out of 5
Scones: 0 out of 5 because I didn't ask for any. I'm so sorry, everyone.
Chances of me being sacked as Scone Blogger: 5 out of 5
Posted by National Trust Scones at 04:19 1 comment: