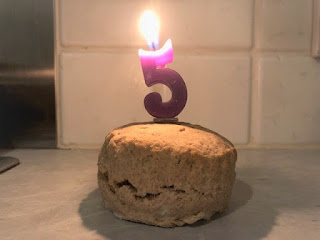 By my count, I think I have around 60 scones left to go. We can do this. Onwards!
Posted by National Trust Scones at 12:55 No comments: 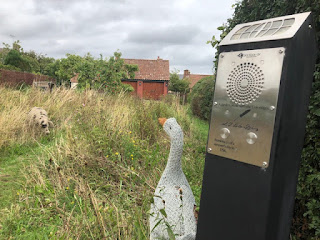 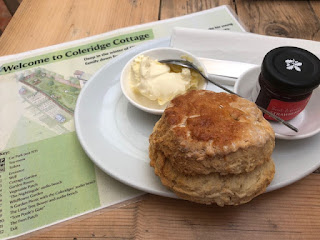 Posted by National Trust Scones at 11:25 No comments:

"Fyne Court was once owned by the electrician, Andrew Crosse," I learned during my research for this 170th scone mission. It cheered me up immensely - what hope to us all, that the National Trust might one day be interested in our homes! Electricians today - who knows, maybe even marketing managers will get a look-in eventually. I should probably start tidying up.

But of course the word electrician meant something very different in 1805 when Andrew Crosse inherited Fyne. He was known locally in Somerset as "The Thunder and Lightning Man" because of his experiments with the relatively unknown force of electricity...and eventually it all turned a bit nasty, with vicars doing exorcisms outside his house and what-not. Here's what I learned:

1. Fyne Court burnt down in 1894
...but before you jump to any conclusions, the fire had nothing to do with electrical experiments going wrong, or deranged arsonist vicars coming to stop the Devil's work - a housemaid's candle was to blame. I'm only mentioning it so early in my story because you're probably wondering what has happened to my usual stunning photograph of the house (I'm joking). Answer: there is no house at Fyne Court because it was engulfed in flames and pulled down. But here's a picture of the Boathouse which fell into disrepair: 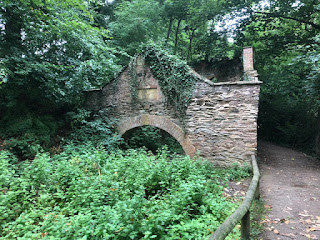 2. Fyne Court had been built in 1634
The Crosse family built Fyne Court in the 17th century. They were descended from a bloke called Odo de Santa Croce, who had sailed to England with William the Conqueror, and they had stayed close to the political action ever since; Andrew's own father had witnessed the Storming of the Bastille.


3. Andrew, the scientific wonderkid
Andrew Crosse was born in 1784 and became interested in electricity when he was around 12 - his father was a friend of Benjamin Franklin, which may or may not have influenced him. He continued his interest at Oxford and then set up his laboratory at Fyne when he returned to live there.

There is undoubtedly a connection - Crosse gave a lecture about his experiments in London in 1814 that Mary Shelley attended, and she started writing her famous novel in 1816. But much as I'm a sucker for a great story, I wasn't totally convinced, especially as the author bizarrely tries to support his claims by pointing out that a gargoyle in the churchyard looks like Boris Karloff in the 1931 film - don't they all??

However, I was happy to see the NT promoting the possible connection with a big display in the little information centre. I went to an NT property once that had an unsubstantiated link with the Gunpowder Plot and they didn't mention it anywhere. I took this as a sign that the NT is probably very risk averse when it came to rumours and conjecture. But no - turns out they like a good story as much as anybody. 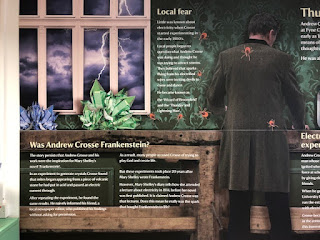 5. What happened to Andrew Crosse?
Crosse's work benefitted experts and locals alike. He corresponded with some of the leading thinkers of the day, even though he preferred the quiet life at home in the Quantock Hills to hobnobbing in London. Locally, his electrical machine was used for curative purposes - a farmer who had been paralysed on one side was treated by Crosse and was much improved.

However, it all got very difficult when he made a surprising discovery. During one of his experiments, he seemed to create living insects from a stone. Unable to explain it, he shared this news with a small group of people, one of whom, unfortunately, was the editor of a local newspaper. The good news was that the insects were named after him. The bad news was that it stirred up a tidal wave of vitriol and fear that Crosse was consorting with the Devil and meddling with nature/God's work. This is what brought Reverend Smith up to the estate to perform an exorcism.

6. Fyne Court today
There might not be a house at Fyne Court, but the estate covers 65 acres and there's lot of space for walking.

7. But what about the Fyne Court scone?
I really wanted a showstopper of a scone today - it was the 170th mission after all, AND it was also the 5th anniversary of me starting this National Trust scone blog project. But the Fyne Court scone turned out to rather suit its surroundings, in that they'd done their very best with limited resources. There's no proper kitchen at Fyne, so I assume the scones were bought in - mine was dry and didn't seem very fresh. But it did taste better than it looked. 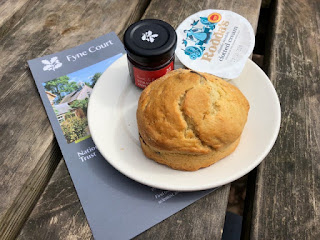 I'm going to end on a sombre note because much as I enjoyed The Man Who Was Frankenstein, it is also sad. Crosse was prone to introspection and depression throughout his life, even before the world ganged up on him and vicars started waving crosses around outside his house.

His final words to his wife before he died were: "My dear, the utmost extent of human knowledge is but comparative ignorance". Does that mean that when this odyssey is over, I'll still be none the wiser about scones??