It is admittedly a bit of a stretch to compare this National Trust Scone Blog to Game of Thrones. In its last season, each GoT episode cost $15m to produce. This blog post about Lavenham Guildhall cost a bit less than that, although I nearly had a heart attack when the bus driver asked for £7.40 to take me seven miles. I'm not sure what was worse - parting with the cash or the fact that I can remember bus fares costing 25p and am therefore officially of 'nan age'.

BUT ANYWAY. This is the final year of the National Trust Scone Quest and I live in mortal fear that it'll end up like GoT; a massive damp squib with all of you feeling let down. I can't let you down. I just can't.

So I've upped the ante a bit. I've gone into "the cloud" and got some "big data" to help me not fail. My first task: make the first scone mission of the year a non-disaster. They're always a disaster. Usually it's because I'm wearing inappropriate shoes and the weather is bad, but I've also turned up to properties that were shut or partially shut and it's always horrendous.

So I did the maths. Last summer, I ran a survey asking you all to tell me which properties I should prioritise. The runaway winner was Lavenham Guildhall in Suffolk, so I checked the details; open in January, located in a village offering tarmac and limited mud, weather didn't look discouraging. So off I went. 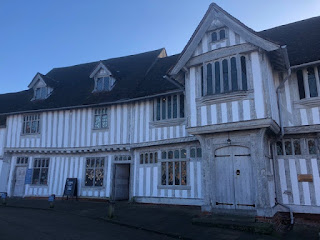 Here's a bit of history for you:

Lavenham Guildhall: for religion, not trade

I had assumed that a guild was an association for people belonging to a trade, for example weavers or masons, but not in this case - trade guilds were found in large towns and cities, whereas guilds in smaller locations tended to be religious. There were five religious guilds in Lavenham and this one belonged to Corpus Christi. Lavenham Guildhall was quite small, suggesting that membership was limited to a few eminent merchants.

In 1525, Lavenham was the 14th richest town in England, paying more tax than Lincoln or York. This boomtime had come about because of cloth - Lavenham was famous for producing a blue broadcloth called Lavenham Blews, using woad as a dye.

The Guildhall: built to impress

The Guildhall was built along with two adjacent properties in 1529-30. They were all constructed using timber plus wattle and daub, as East Anglia lacks natural stone. The Guildhall was a bit more elaborate than the other buildings, again suggesting it was a meeting place for high status folks.

The end of the Lavenham boom...

Sadly for Lavenham, a recession hit the cloth industry in the 1520s and 30s and many merchants moved into other industries, leaving a lot of unemployment. By 1568, Lavenham had fallen behind other towns in the area and never regained the levels of wealth and success that it had achieved.

...and the end of the guild - the Guildhall becomes a prison

Religious guilds also came to an inglorious end, being dissolved from 1547 during the Reformation. By 1655, we know that a portion of the Guildhall was being used to house paupers charged with petty crime in what was then called a 'bridewell'. The museum contains some brutal stories of children being incarcerated there before being transported to Australia.

The Guildhall becomes a workhouse

In 1655 the Guildhall also became a workhouse. This was in pre-Victorian days, when being poor was considered to be a fact of life and inhabitants were reasonably treated. It was only later that the idea of the 'undeserving poor' came about and the workhouse became a terrifying place of absolute last resort. Lavenham's workhouse closed in 1836.

The rescue of the Guildhall

Thomas Patrick Hitchcock owned the properties after 1836. He divided the place up and rented it out to tenants, also using space for a granary and a woolstore. A rich man called Sir William Cuthbert Quilter then bought the buildings in 1886 and set about restoring them. He was ahead of his time, as 30 years later the realisation dawned that Lavenham's buildings needed to be preserved and a wider effort began.

But let's move on to the all-important business of the scone. I've had excellent reports about Lavenham scones over the years but I didn't want to get too excited - see above for first-scone-of-the-year-disaster precedents.

However, there was nothing to fear. The scone was sublime. It was fresh and warm and tasty and I gobbled it down in about 10 seconds, much to the alarm of the nice ladies at the next table who must have wondered where the Cookie Monster had suddenly come from. 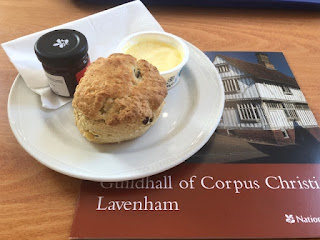 I'll end with this picture of Lavenham village. I took it as I was standing at the bus stop - by the way, I'm pleased to report that they had provided a nice bench for my tired old grandma legs, although presumably not out of bus profits.

It was only afterwards did I notice that the picture looks like something from 'Postcard from the Past'. Lavenham didn't feel stuck in time though - most of the old buildings have been turned into useful things like pubs and there's a buzz to the place that definitely wasn't tourist-dependent. It just looks very classic. 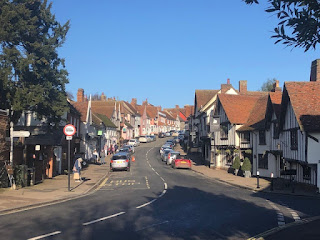 So there you have it: the first scone mission of the year completed and it was a roaring success. I'm going to take this as an omen that 2020 is going to be our year, scone fans, and we will be victorious in completing the National Trust scone quest!

Posted by National Trust Scones at 11:51