"A lunatic site for a house" is how one architectural expert described Cragside near Newcastle-upon-Tyne. Having now seen the place, I wouldn't disagree with him. 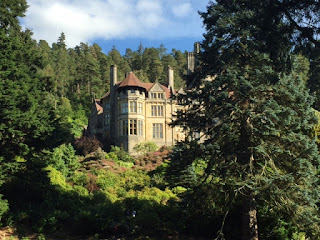 I've seen NT houses built from the landscape before - Stoneywell in Leicestershire is an example - but Cragside is IMMENSE. It's a huge house built on rock that was blasted away with dynamite, and then surrounded by what must be one of the largest rock gardens in the world: 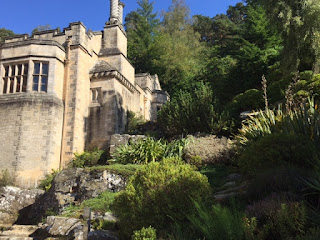 You might already have guessed that Cragside wasn't built by an ordinary person. William Armstrong was an industrialist and scientist who invented hydraulic cranes, breech-loading cannons, iron-clad warships, and a lot more besides. He believed anything was possible, which means he is about as diametrically opposed to me on the great human characteristic chart as it possible to be.

I read William Armstrong: Magician of the North before I went to Cragside and I can recommend it. Here is a very, very short summary of his life and times:

The most astounding room is the Drawing Room. This was the final room that was added - it was finished in 1884 just in time for the royal visit. The chimney is astonishing, especially when you consider that it was largely decorative, as the room was heated by its own boiler and pipe system from below: 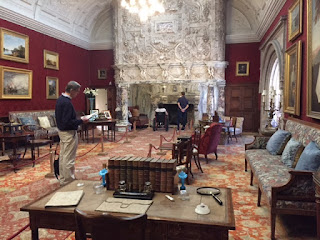 The study only gets 8 short lines in the guide book but I LOVED it - it's the studiest study I've ever seen, with a massive desk and a lovely portrait of our chum William aged 21. 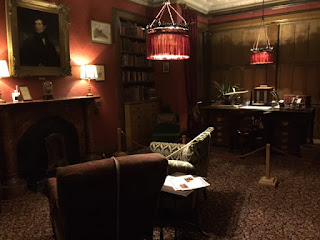 William also added some very impressive-looking Turkish Baths. A visitor in front of me said "Is this the spa?" and she was spot-on - they look incredibly modern considering they were built in 1870: 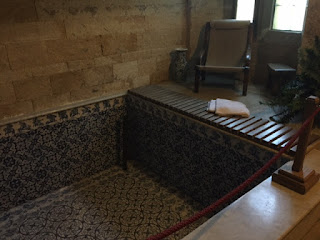 I am also clearly aligning with the NT. I saw this picture in the Gallery, of a dead shepherd being licked lovingly by two sad dogs, and I could NOT believe that anybody would want to either paint or own something so depressing. I later found out that the writer of the guide book totally agreed with me - they call it "laden with sentimentality, gloom, and death" - but that's what the Victorians liked. It was also based on a true story, apparently. It's still awful: 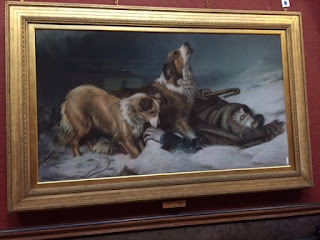 The gardens are beautiful. The iron bridge just down from the house was constructed in 1869. It was closed for years but reopened in 2009 and hurray for that, because it offers really stunning views of the house. This is a not very good picture of the bridge and house: 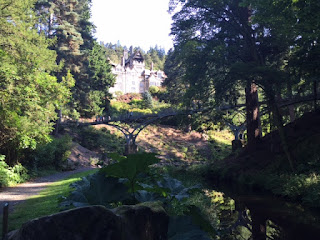 The Cragside scone
But let's move on to the scone. It looked a little bit dry but it was actually very tasty indeed and I thoroughly enjoyed it: 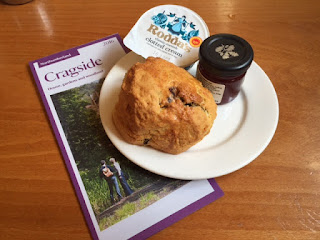 In the spirit of William Armstrong, I also decided to be all inventive and try a local baked foodstuff as well as my usual scone. This is a Singing Hinny - like a Welsh cake, it looks like a scone that got run over. But it was very tasty. 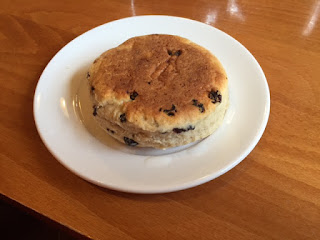 The only thing I wasn't keen on was that we ended up eating our scones in the tea-room, when we could have been sitting out in the picnic area with this magnificent view. But I'm sure the staff wouldn't have stopped us taking our tray out here, so it's my own fault. 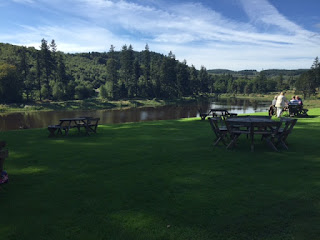 I'll be honest with you: I had never heard of William Armstrong before I decided to visit Cragside. So I'm going to finish by talking about why he is not remembered today in the same way as his near contemporaries, Robert Stephenson and Isambard Kingdom Brunel.

The book sets out a number of possible reasons, including:
Anyway. You'll have to go a long way to find an NT property that is as unusual and as impressive as Cragside and I highly, highly recommend it.

Posted by National Trust Scones at 13:21