I decided to try and cure this malady by actually going to Lindisfarne, which is just down the road from Berwick-on-Tweed. Lindisfarne is known as the Holy Island and there are two impressive sights to see: Lindisfarne Castle, which is owned by the National Trust, and Lindisfarne Priory, owned by Those Who Must Not Be Named (English Heritage). 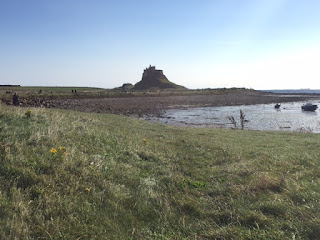 Here's a bit of history for you:
There's a lovely walk up to the castle from Lindisfarne Village. From the outside, it looks quite compact and simple in its structure. Inside, it's a real wonder - Lutyens used the existing features to their best advantage and created rooms that somehow manage to look cosy. I'm not sure I'd want to be living there in January, however.

This is The Ship Room, so named because of the model ship that is suspended from the ceiling. You'll just have to imagine that, however, as I spectacularly failed to get a photo of it: 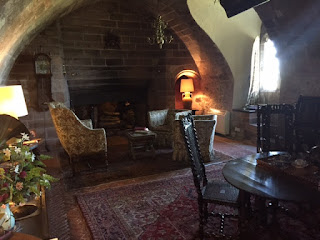 We then trotted off across the island to see the ruins of the Priory. It never fails to amaze me that human beings managed to build such huge, beautiful buildings with only rudimentary tools and equipment.

Here's the Scone Sidekick looking a bit casual I have to say - not sure St Cuthbert would have approved: 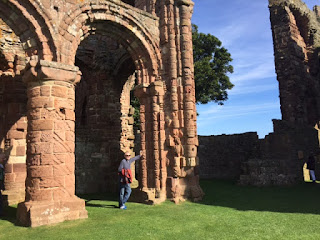 I'll be honest with you; lovely as the castle was, my abiding memory of Lindisfarne will be the journey across the causeway. You can only drive across at certain times of the day when the tide is out, which gives the whole trip a sense of adventure.

Even though we had two hours to spare, I was still nervous driving across thanks to the big signs saying "your safety is your responsibility" and the little huts on stilts where people have apparently had to climb to safety while their Ford Focus bobbed off towards Norway. Still, you don't get that at Petworth.

There were no NT scones at Lindisfarne Castle, as there is no NT tearoom. Don't let that put you off though - you can get hot beverages and cake galore in the various pubs and cafes in the village.

Lindisfarne Castle: 5 out of 5
Scones: 0 out of 5 (there weren't any, but we knew that)
Risk of drowning not normally experienced on an NT outing: 5 out of 5
Posted by National Trust Scones at 09:03