I'll cut to the chase here: there aren't any scones at the Beatles' Childhood Homes. But seeing as Paul McCartney and John Lennon gave us the most influential pop band of all time, as well as 180-odd Beatles songs, as well as all the other music they did, I'm going to let them off.

There are two properties that you get to visit as part of your pre-booked tour:

Pre-booking is essential and you meet your driver at a designated pick-up point (in our case, Liverpool South Parkway station). They then drive you to the first property, drop you off, and then pick you up and drop you off again. The reason for this becomes very clear: both houses are on normal residential streets. Even the most tolerant of neighbours probably have a limit on how many people and how much traffic they're willing to put up with.

Our first stop was Mendips. I had heard that John had grown up with his aunt and uncle in quite well-to-do surroundings, after it became clear that his parents weren't able to look after him. It wasn't quite the case - his Uncle George died very suddenly when John was 14 and Mimi took in student lodgers to make ends meet. 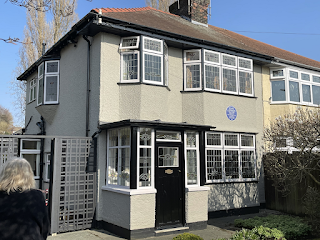 In yet more tragedy, John's mother Julia was hit by a car and killed in 1958. What I didn't know was that she had been visiting Mimi and the accident took place only a few yards from Mendips.
Colin, the tour guide at Mendips, was great. He was a local boy who remembered the very church fete where John Lennon met Paul McCartney for the first time. Unfortunately for Colin he doesn't remember The Quarrymen playing their set at all - he did remember the police dog display though and said it was amazing.
We then hopped back on the bus and zipped off to Forthlin Road. Colin had told us that Mimi was a bit sniffy about John having friends from the council estate but as Paul dressed smartly and didn't "talk Scouse" she let him in the house.
Paul also had tragedy in his life. The family moved to Forthlin Road in 1955 but his mother died shortly afterwards, when he was 14. Music was a big thing for Paul, his brother Michael and his dad. Jim had formed an outfit called Jim Mac's Jazz Band, and Paul's brother Michael later formed The Scaffold (of Lily the Pink fame) with Roger McGough and John Gorman. Lots of Beatles songs were composed in the living room at Forthlin Road. 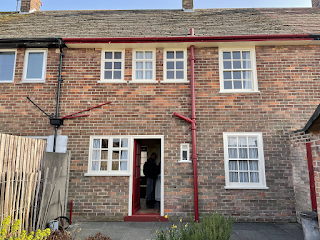 Paul's brother Mike was a keen photographer and so there are loads of great shots of the family - Paul getting ready to to The Cavern and so on. It really helps to bring the place to life, as do the recordings of both Paul and Mike that get played as you move around the house.
The National Trust has done a great job of restoring the place. The tour guide explained that the NT had acquired the windows from a house across the road, for example, while the original Belfast sink was found in the garden being used as a flower pot. My favourite story was the front door: when new owners replaced the original, the next-door neighbour retrieved it from the skip knowing that it might be a worth a bob or two one day.
Unlike Mendips, there's no blue plaque on Paul McCartney's house. This is because English Heritage only give you a plaque when you've been dead for at least 20 years. I can understand that it helps give a bit of perspective but come on: I hardly think we'll forget Paul McCartney.
Anyway - I highly recommend a visit to the Beatles' Childhood Homes. The tour guides are fantastic and it's a really unique insight into the history of music and the lives of Lennon and McCartney.

Beatles' Childhood Homes: 5 out of 5, 8 days a week
Scones: there weren't any but we knew that
Tour guides: 5 out of 5

Posted by National Trust Scones at 12:04

Email ThisBlogThis!Share to TwitterShare to FacebookShare to Pinterest
Labels: Merseyside