It takes a bit of commitment for a visitor to get to Lundy Island in Devon. A boat trip lasting just under two hours takes you from Ilfracombe harbour. You can then either get the boat back again a few hours later or you can stay in accommodation on the island.

I had worked out before I set off that I probably didn't actually need to go to Lundy at all. It's owned by the National Trust but the island is run by the Landmark Trust, an organisation that rescues interesting buildings and makes them available for holiday rental. The rules of the National Trust Scone Blog state that I only need to visit properties where the scones are provided by the NT itself.

But before anyone says "National Trust Scone Blogger, you really don't make it easy for yourself", let me tell you that this fastidiousness is caused by one thing only: FEAR. I am so fearful that I will slump over the finish line on this project, only for someone to say "You haven't been to Lundy. I was there in July and they have a huge NT cafeteria serving 15 types of scones," that I am covering places that probably don't need to be covered, just to be on the safe side.

So I went to Lundy and it was well worth it. Let me tell you a bit about it.

Lundy has had many owners and each has contributed to the island's development in different ways. I highly recommend the guidebook for a full run-down. Some of the buildings you can see today include: 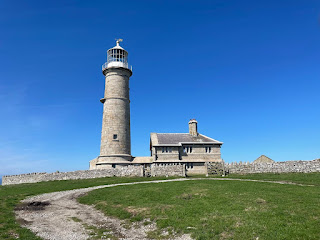 Lundy also has a shop and a pub but that's about it as far as sustenance goes. The Marisco Tavern never shuts apparently - it only serves alcohol during licensed hours but it's the only building to keep its lighting on even after the generators have stopped and everything else is dark.

The Marisco Tavern was originally the shop. It was built during the 1860s to serve the 300 men who worked in the quarry and it offered a "Refreshment Room" as well as supplies. (My Scottish Great Auntie Nessie always referred to a drink as a "wee refreshment" so she'd have approved of that.) Once the quarry had gone, it retained its dual purpose as pub and shop.

I didn't see any scones on display today and I didn't have the heart to ask if they had any. Instead, I had a piece of Victoria sponge and it was fine.

Scones weren't the only thing to elude me today. Lundy is famous for its wildlife, especially its puffins. I was extremely excited about seeing some puffins but I realised a few weeks ago that this wasn't going to happen. Puffins spend the winter out at sea, bobbing about and eating fish. They only come inland in March to mate and nest and have their young. In August they go back to sea again, like little mini sailors. I hadn't missed them by much. But I'd definitely missed them.

Everyone on the boat was hoping to see a dolphin - we didn't. The boat announcer told us to beware of the Lundy ponies, adding with some interesting certainty "because they bite". I didn't see them either. I did see a seal though, so that was very exciting.

In short, I highly recommend Lundy Island to you. It might not have any scones but it's a great place to spend a few hours or even a few days if you like very dark and quiet nights.

Lundy Island: 5 out of 5
Scones: 0 out of 5 - there weren't any
Someone playing the recorder very loudly - mind you, this was late in the afternoon. Maybe they just wanted us all to go home: 0 out of 5

Posted by National Trust Scones at 06:42