Buckland Abbey had two illustrious owners in the 1500s. The first was Sir Richard Grenville, an Elizabethan adventurer whose dad died the most Tudor of deaths; he went down with the Mary Rose when it sank in 1545. 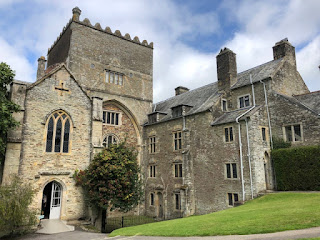 The second owner was Sir Francis Drake. He bought Buckland from Sir Richard, although apparently he had to do so through a third party, as Grenville hated him.

But let's start at the very beginning:

Buckland Abbey starts out as, erm, an abbey

Buckland was a Cistercian abbey founded in 1278 by Amicia, the dowager Countess of Devon. Cistercian abbeys were set up to revive the principles of St Benedict, bringing back poverty, chastity, and obedience instead of the opulence and corruption that would ultimately be the undoing of the monasteries.

The Great Barn is still there
There's a large barn next to the house that would have stored all of the goods that the monks produced; wool, cheese, honey, wood and fruit.

Dissolution spells the end for the monks
Buckland avoided the first cull when Henry VIII started the dissolution of the monasteries in 1536. However, a rather dodgy custodian was put in charge and it was only a matter of time before he handed the place over in February 1539, doing very well for himself out of the closure.

Richard Grenville the younger isn't very interested in sitting at home
The younger Richard wanted a life of adventure, so when he finally came of age he sold some land at Buckland and took off. He began with a bit of solidering in Hungary and then became Sheriff of Cork before evolving into a privateer, a privateer being someone that sails off to find new lands and riches on behalf of the Queen with her support. He did eventually 'settle' at Buckland - he converted the abbey into a home, while also hunting down Catholics and hanging them, for which he was knighted.

Richard sells up, goes back to sea, ends up dead
The very well written guidebook tells how Richard came out of retirement to go back to sea, possibly because he was jealous of Sir Francis Drake's success in circumnavigating the globe and returning with treasures that made him very popular with Elizabeth I. It also tells how he disobeyed orders during his last voyage in 1591; "Sir Richard was shot, most of his crew died, and his ship was pounded to splinters". So there we are.

Sir Francis Drake buys Buckland
Was Francis Drake a pirate? Was he a slave trader? Was he a pious man who was relatively benevolent to his prisoners? Was he constantly chasing the spoils and annoying his cohorts by always somehow ending up with the loot? He was all of the above, according to a book I bought at Buckland called 'Behind the Pirate's Mask'. Here are some factoids: 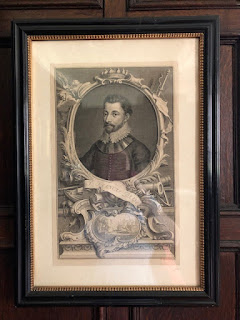 The legend of Drake's drum
I didn't see the replica of Drake's drum - maybe it wasn't on display or maybe I just wasn't paying attention and walked right past it - but it's the stuff of legend. Drake had a snare drum that he took with him on voyages. He apparently ordered the drum to be taken back to Buckland, vowing that if England was ever in trouble then the drum should be beaten and Sir Francis would return to save the day. It has reportedly been heard on several occasions.

Buckland after Sir Francis
Sir Francis Drake had no children and left his property to his brother, Thomas. Buckland continued to be inhabited by Drakes for many years - they were "booted out" during the Civil War according to the guidebook but returned in 1646.

By 1750 Drake's descendants had moved out to another residence and Buckland fell into disrepair. It was restored and Drakes returned to live there again, although by now they had names like Sir Francis Fuller-Elliot-Drake. When the last Drake inherited in 1937 (Captain Richard Owen-Tapps-Gervaise-Meyrick) the house caught fire and had to be restored again. It was then put up for auction - a Captain Arthur Rodd bought it and handed it to the National Trust.

Buckland today: house and museum
I particularly liked Buckland because it does two things at once; rooms like the Great Hall give you some idea of where and how Grenville and Drake lived, but it's also very much a Francis Drake museum with artefacts and pictures.


There was also an added bonus waiting for us; a famous portrait of Drake was on loan from the National Portrait Gallery. Painted in 1581, it shows him in all his finery following his successful circumnavigation of the globe. 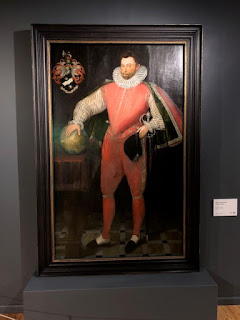 The Buckland scone: Sic Parvis Magna indeed
My heart sank a bit when I saw the Buckland scone. It looked a bit small, especially when compared to some of the other Devonian scones I'd had in recent times (Antony being one example).

But Drake's motto was Sic Parvis Magna, which means 'Greatness from small beginnings', so I ploughed on. And the scone did turn out to be very tasty. 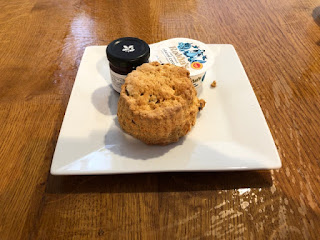 I just Googled 'Sic Parvis Magna' to make sure I'd spelt it correctly and it's a very popular tattoo apparently.

I'll end with this. If you're a regular reader, you'll know that for six long years I've been at sea working on this blog, wondering whether I'll ever finish the odyssey. I found this prayer at Buckland by the very pious Sir Francis, which says: "Grant us to know that it is not the beginning but the continuing of the same unto the end, until it be thoroughly finished, which yieldeth true glory". Even if he was a pirate, and even if sailing around the world is not quite the same as eating 200+ scones, I'm taking it as inspiration from one quest seeker to another. Thanks, Frank. Onwards to true glory. 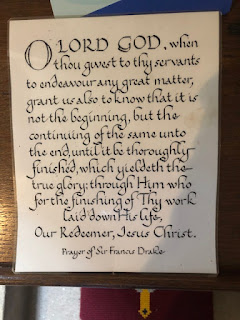 Buckland Abbey: 5 out of 5
Scone: 5 out of 5
Unexpectedness of the Scone Blog branching out into tattoo inspiration: 5 out of 5

Posted by National Trust Scones at 12:05