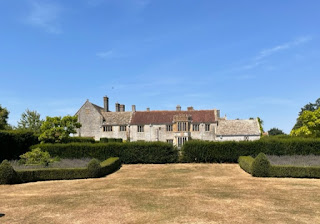 You may be wondering "how do you know when you're in the presence of a five-star volunteer guide?". Luckily, I have the answer: you know they're brilliant when you have to drag yourself away from them. You want them to follow you around for the rest of your life, pointing things out to you, eg "This Tesco Express used to be a haberdashery. They once sold some buttons to Larry Grayson." or "There have been 114 marriage proposals in this restaurant. 112 were accepted, although of those was later rescinded."
Anyway. Lytes Cary today had not one but TWO five-star volunteer room guides. A man called Ian told us all about the Great Hall. Then we met Sue who pointed out all the quirky stuff in the Great Parlour. What I loved about them was the enthusiastic honesty, eg "These figures by the fireplace are made out of leather. They're quite ugly but everyone has their own tastes." 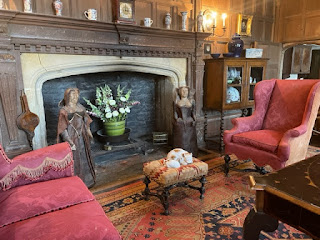 But let me tell you about the history of Lytes Cary: 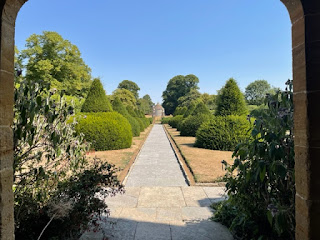 I need to tell you that I went to Lytes Cary during a heatwave. This may have impacted on scone quality, as I can't imagine that it's much fun baking all day in a small kitchen when the temperatures outside are hitting 32 degrees and above. But - and it's genuinely paining me to say this - the Lytes Cary scone was a bit stale.
The simple conclusion I have drawn after 9 years of eating National Trust scones is this: a fresh scone is 99% likely to be a good scone. If it's been baked in the last 2-3 hours, you almost cannot fail with it. The Lytes Cary scone was definitely a bit older than it should have been. 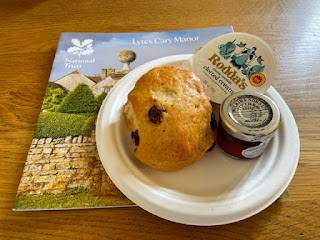 I also had two other scones that didn't quite hit the mark during this hot weekend - one at Knightshayes and one at Barrington Court. It's a long time since I've had a run of three scones without a five-star performer and I was feeling quite worried about it.
So at last minute, I decided to add Montacute to the itinerary. I'd loved it there when I went in 2015 and they were brilliant again today; a top class scone. In the cafe they had a sign, though, which made me feel even more worried for all those people working so hard to keep things going in National Trust food and beverage outlets at the moment: 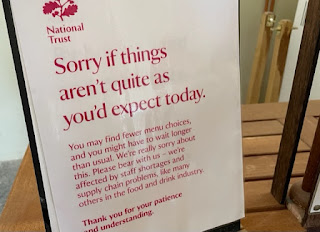 But let's not despair! We need to let the National Trust F&B teams know that we appreciate them and hopefully things will improve again soon.
In the meantime, I've decided that my next blog will be National Trust Holiday Cottages. I will selflessly offer my services as a kind of Judith Chalmers of the NT, going about reporting on bed quality and local cuisine (scones, obviously). Selfless, I know, but surely someone has to do it?
Lytes Cary: 5 out of 5
Scone: 3 out of 5
Lytes Cary volunteers: 500 out of 5
Other National Trust scones in Somerset: Barrington Court, Bath Assembly Rooms, Bath Skyline, Brean Down, Coleridge Cottage, Dunster Castle, Fyne Court, Holnicote, Montacute, Prior Park, Tyntesfield
Posted by National Trust Scones at 08:36