So have you been doing any set-jetting this year? Set-jetting is the new craze, according to the Daily Mail. Although 'craze' might be overdoing it - it basically involves going around Somerset and Cornwall visiting the stately homes where Wolf Hall was filmed.

Montacute House near Yeovil stood in for Greenwich Palace, which was Henry VIII's main London residence - all those scenes of jousting and archery with Mark Rylance looking pensive next to a hedge were filmed at Montacute. 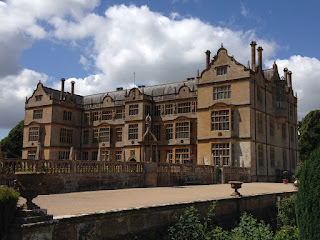 Let's start with a few facts:
Here's a picture of Elinor Glyn. Let's take a moment to thank her for not burning the place to the ground when she realised Curzon had proposed to someone else, after she had spent months renovating his freezing house for him. 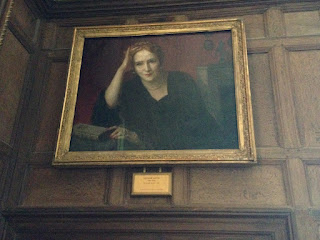 Some other highlights of my day:

The pictures
In 1975, in a continued bid to furnish itself, Montacute became the first NT property to become an 'outpost' of the National Portrait Gallery. I was expecting to see a few second tier pictures that the NPG didn't want - the Krankies or something - but no. The entire top floor has been turned into an EXCELLENT gallery, with rooms dedicated to the Jacobean court, the Tudor court and so on.

I took about 100 photos but I'll spare you the ones where I just liked the subject's hat. Here are two of my favourites:


The hedges
I was absolutely FASCINATED by the hedges at Montacute. To use a technical gardening term, they're all bobbly. I decided that at some point they had been topiaryied into a depiction of the Nativity or the cast of EastEnders who might have killed Lucy Beale or something but the gardener had eventually thought 'sod this' and let it grow out. 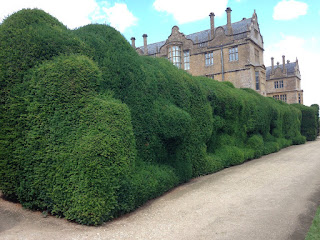 The Nine Worthies
I also learned about the Nine Worthies today. Regular viewers will not be surprised that I had never even heard of them before. I sometimes wonder if I dreamt going to school. Anyway, there are statues of the Nine Worthies over the entrance at Montacute and they are; Hector, Alexander the Great, Julius Caesar, Joshua, David, Judas Maccabeus, King Arthur, Charlemagne and Godfrey of Bouillon.

I will admit that whenever the National Trust teaches me something like this, I instinctively imagine myself on a quiz show and the presenter saying "so, Sarah, just one question lies between you and today's RECORD jackpot...Sarah, for a squillion pounds, who were the Nine Worthies?" This is ridiculous of course, because no quiz show I watch asks these sorts of questions - it's all "what type of fruit did Eve give to Adam?" or "what is the opposite of dark?" - unless you count University Challenge, which I am not eligible for on account of not being at university anymore.

Wolf Hall filming locations
Back in March, I had to do some filming for work. I was given a small room and a producer and told to interview a few customers. The day before the filming, I saw the room for 5 seconds, said "that'll do" and headed off for my dinner while the producer made worried noises. The next day, I turned up to find the room literally full of film crew and kit. The customers had to climb over boxes to sit in their interview chair and be filmed for 2 minutes. It was unbelievable.

All this is a preamble to me telling you that I have ABSOLUTELY NO IDEA how they managed to film Wolf Hall at Montacute. It's big but it's not that big. And they had CANDLES!! Can you imagine being in charge of Montacute when there are candles everywhere? I bet that person still wakes up in the middle of the night going "Dave, wake up! Damian Lewis left a candle in the Crimson Chamber in 2014! Get a bucket!" I don't think I would ever sleep again.

Anyway, this is one of the rooms they filmed in - the Great Hall: 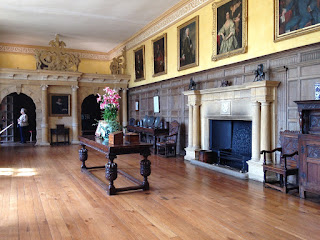 The Montacute scones
Experts were baffled last year by the strange happenings on the National Trust Scone Odyssey in July; nearly every property I visited delivered top class scones. Nobody could work out why July had proved to be a bumper month - it was crop circles all over again.

But somebody alert Sky News, because it's happening all over again this year. There I was back in March, despairing that I would never see a decent scone again, and here I am in July declaring my FOURTH excellent scone on the trot. The previous three July stunners were Sissinghurst, Goddards, and Beningbrough.

The Montacute scones were just excellent. Like the hedges, they were a bit bobbly but they were very fresh and I thoroughly enjoyed them. 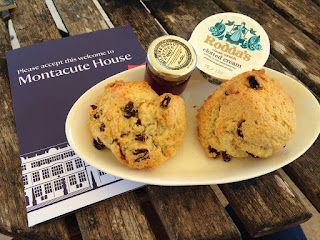 Anyway, if you happen to be on South West Trains and come across a Montacute guidebook - let me know.

Montacute: 4.5 out of 5
Scones: 5 out of 5
Realising Lady Jane Grey didn't look like Helena Bonham-Carter: 0 out of 5
Posted by National Trust Scones at 12:20