I need only three words to explain why I came to Goddards today: TERRY'S CHOCOLATE ORANGE. Because Goddards was the home of Noel Goddard Terry, creator of that most genius of products. 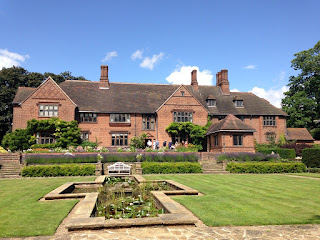 But Fact of the Day #3 is surely one of the greatest National Trust factettes of all time: before Terry's invented the Chocolate Orange, there was a Chocolate APPLE! I'm SERIOUS! Of all the things the National Trust has taught me, the shocking existence of a Terry's Chocolate Apple is surely the most stupendous. If they told me that Woolly Mammoths had once roamed the grounds at Petworth I would be less surprised.

Anyway. I badly wanted to like Goddards today, mainly because the people/person that run/runs their Twitter account are/is so lovely. And that's always a worry, because I cannot lie to you and if it wasn't very good I would have to say so.

But as usual I was worrying for nothing, because Goddards is one of the best National Trust properties that I've ever visited.

Let me try and tell you why it's so good:

The house
I would move in to Goddards tomorrow if the National Trust would let me. There was no guide book, so I'm a bit short on facts, but it was built in the 1920s by a Yorkshire architect called Walter Brierley and it feels like a real family home. What's even lovelier is that you're allowed to sit on the chairs and play games in the playroom and basically pretend you live there. 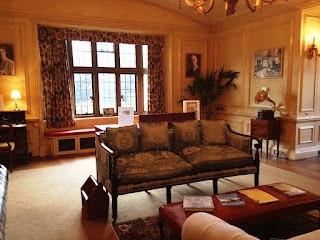 There's a really interesting exhibition on the first floor about the Terry family and their chocolate business. You can just about see the old factory from the garden. I was sad to learn that it was closed down in 2005 when Kraft moved production overseas - the Chocolate Orange is now made in Poland and Terry's All Gold in Belgium. There was a brilliant room guide called Aileen who explained it all to us.

The history of Terry's goes as follows; Robert Berry originally opened a sweet shop in 1767. His niece married a chemist called Joseph Terry, who joined Robert's business and eventually took it over and renamed it Terry's of York. It was then that they started to produce chocolate - previously it had been boiled sweets.

Noel Terry, Joseph's grandson, joined the business in 1923. It was during his time that the Chocolate Apple, the Chocolate Orange, and Terry's All Gold were invented. Terry's was then acquired by various large conglomerates, with Kraft taking over in the early 1990s.

The sherry
I think this is one of the greatest things I have ever seen at the National Trust: an honesty box for sherry. Yes, you read that correctly. You are encouraged to put £2 in the box and pour yourself a glass. You can then sit on the sofa and pretend to be Noel or Kathleen Terry. What a brilliant idea. 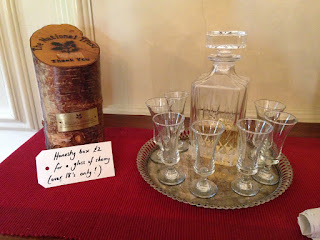 The family
I was only at Goddards for an hour or so, but by the time I left I felt as if I knew the Terry family. There are pictures and quotes and letters and all sorts of family stuff around the place. Here they are - Noel Terry is front left, with his three sons, his daughter, and his wife Kathleen: 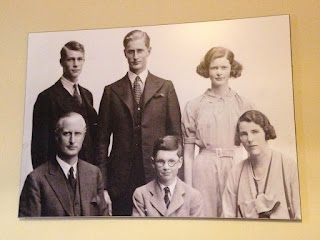 The garden
You can also pretend that you own the place in the garden - there are tables and chairs where you can sit and drink your tea/eat your scones and say things like "we really ought to ask Jenkins to cut that laburnum back". It's beautiful.

The tea room
The tea room is actually in the old dining room overlooking the garden AND they have table cloths and waitresses. It is without doubt one of the nicest National Trust tea rooms in existence. I would still be sitting there now if I could.

The scones
The Goddards scone was one of the finest National Trust scones I have ever tasted. It was perfect. It was the ideal size, it had a slightly crunchy exterior but was soft as anything inside, and it was delicious. 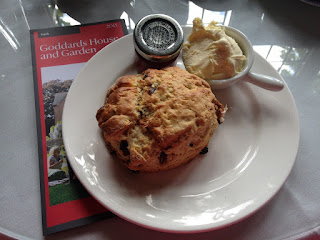 Today's successful mission means that York has overtaken Suffolk as the epicentre of National Trust scone excellence. I had my never-ever-to-be-forgotten Christmas pudding scone at Treasurers House back in November, and my second scone today (don't tell anyone) at Beningbrough Hall was a roaring success too. So head to York, everyone. They might not make Chocolate Oranges anymore but they made top class scones.