Nobody can ever accuse the National Trust of turning Claife Viewing Station into a tourist attraction, because it always was a tourist attraction. It was built in the 1790s to wow visitors when they came to Lake Windermere in the Lake District, a two storey octagonal tower that looked like a mini castle. 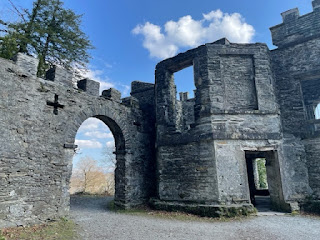 It's hard to believe now, but until the 18th century the Lake District wasn't troubled by tourists. It was largely was seen as an unattractive wilderness. This changed for a number of reasons: firstly the Picturesque movement encouraged people to appreciate landscapes, while the French Revolution and Napoleonic Wars made it harder for people to travel on the continent. The Lake District became a destination and - as 19 million annual visitors can now confirm - it never looked back.
It was one Reverend William Braithwaite who commissioned the original summer house, which was built in a Greek/Roman style. It was then extended by John Curwen after he purchased it in 1801, giving it a more Gothic look. By the 19th century it was hosting dinners and other events, with visitors often arriving by boat and making their way through a landscape garden to the big reveal of the spectacular views over Windermere.
The building also used coloured glass to provide filters on the views - yellow gave the visitor a summer perspective, for example, while light green was used to provide a spring theme and so on. There's still a hint of this in the building today: 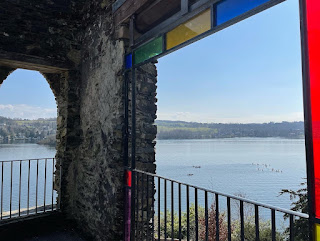 By the end of the 19th century, Claife Viewing Station had fallen out of favour and into disrepair. It eventually passed to the National Trust in 1962.

To be honest, I wasn't sure if the cafe at Claife was actually run by the National Trust. As per the Rules of the National Trust Scone Project, I don't need to include properties with tenanted or 'NT approved' scone facilities.
However, I decided to go for two reasons. Firstly, at this late stage of the scone quest I am taking absolutely no chances of missing one out. Secondly, my very brilliant friend SJ had seen my map of remaining properties and had sorted out the itinerary for the day to help me get two more places covered. I have had a lot of help with this project over the years but SJ and Steph have gone above and beyond - they've done about 450 miles with me and Steph doesn't even eat scones.
The triangular shape of the fruit scones finally convinced me that the place wasn't NT run, but frankly it didn't matter because it was an absolute barnstormer. There was no jam or cream but SJ and I agreed they weren't needed. Fresh, warm, fluffy and full of fruit - it might not strictly qualify as a National Trust scone but I'm including it anyway. 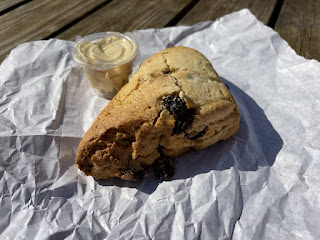 Our luck was also in: one of my fellow scone fans visited Claife the following day and reported that there were no scones at all.
Claife Viewing Station: 5 out of 5
Scone: 5 out of 5
Posted by National Trust Scones at 14:15