Imagine for a moment that you have a lot of money and want to build a new home for yourself and your family. Who would you commission to design it for you? Sir Norman Foster maybe? If you like a lot of steel and glass - think the Gherkin or City Hall - then Norman's your man.
Now imagine that Sir Norman builds your modern house as agreed and then presents you with detailed pictures of his plans for the interiors. You decide that it's too much - too much steel and glass, Norman! So you fire Sir Norman and hire another architect that you think will be more restrained. But they have to come up with something that fits Norm's structure and it's still too much for you. So you spend the next few years covering up all the modern work you paid a modern architect to do.
This, in extremely simple terms, is what happened at Knightshayes. The Heathcoat Amory family hired William Burges, an architect deeply immersed in medievalism and the Gothic aesthetic, to design their house and then didn't like his work. And then John Crace, hired to replace Burges, didn't get it right either. 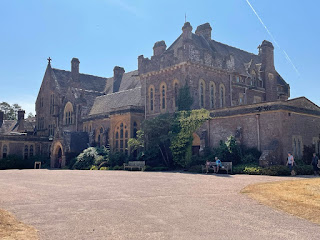 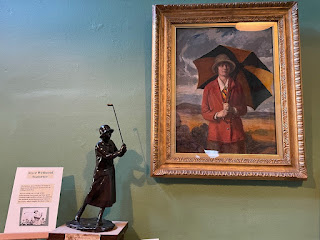 But let's move on to William Burges, the architect who designed the exterior and interiors of what we see today at Knightshayes.
Let's take one of the bedrooms as an example. It is now known as the 'Burges Room'. Burges had designed it as  "a riot of colour" but when the NT took over, it was completely neutral and all architectural features had been removed. They've restored it to his plan:
Every National Trust guidebook has its showstopper factoid - the one you have to read three times to make sure you understood it correctly. The showstopper factoid here is that the Burges Room was opened by Jimmy Page, the Led Zeppelin guitarist, as he is a collector of Victorian Gothic and lives in Burges' former home in Kensington.
The Great Hall is another example. It was built according to Burges' designs, although the roof stencilling he had planned was scaled back by John Crace. But the family didn't like it. They removed the stencilling completely, demolished the screen and reduced the fireplace.  The NT has put them back: 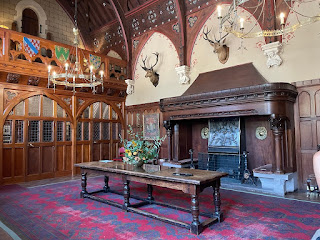 I particularly liked the frieze in the dining room: 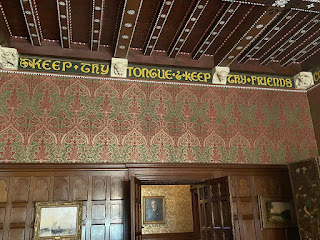 Knightshayes itself is a real showstopper of a National Trust property. It's big and impressive with artworks and architectural features to keep you interested for hours.
The gardens are also very extensive. The last Sir John and Lady Heathcoat Amory were keen gardeners and spent a lot of time improving them. 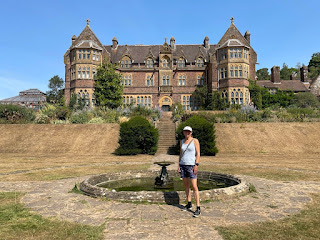 I went to Knightshayes with my very fantastic friend, Kathy. She is an extremely fit triathlete with a lifetime of experience in taking on tough challenges. But could she manage four National Trust cream teas in one weekend? I explained to her that my many years of intensive training in this discipline would make it easy for me but if she was struggling at any point, she only had to say the word. "I think I'll manage," was the gist of her response. 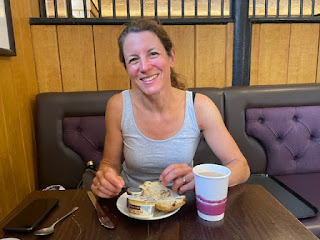 Our visit to Knightshayes took place during an extremely hot weekend. We'd already blamed the heat for the Lytes Cary scone the day before (it wasn't the best) and then Kathy noticed a message on the NT website saying that the Knightshayes kitchen would be closed on the day we were visiting and the food offering would be limited. Staff shortages and heatwaves are clearly taking their toll on National Trust F&B teams.
I wasn't expecting to find any scones at all but we were in luck. We sat in the very nice stables and enjoyed a fruit scone that wasn't fresh but it was tasty. 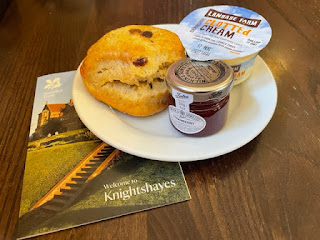 The scone we had later at Barrington Court was better and then we called into Montacute on Monday and found a fantastic scone, so our Somerset mini road-trip ended well.
I'll close by sharing another exciting finding from Knightshayes: National Trust sew-on badges! I had never seen these before and I immediately wanted to start the National Trust Scone Quest all over again so I could create a giant picnic blanket covered in them. It'd be like being in the Brownies again. 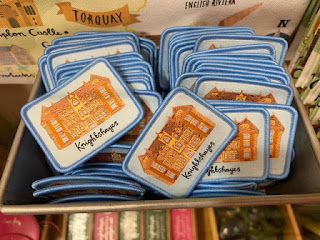 Posted by National Trust Scones at 20:37