When I finally come to write my magnum opus The History of National Trust Scones 1895-Present, I will define in some detail the seismic change - some would call it a revolution - that occurred during the years 2020-2022.

In the pre-COVID era, a National Trust scone that was not served on an actual ceramic plate caused emotional shockwaves. I well remember being served a cream tea on a paper plate in the cafeteria at Greenway and the absolute confusion that ensued. I don't think my MP actually ever raised it at Prime Minister's Questions but she should have done - that's how controversial it was.

But by 2020, when I finally made it to Stackpole for a scone after months of lockdown, I could have sent the takeaway box that it came in off to the Vatican and asked them to canonise it. If the cafe staff had handed that scone to me balanced on an old copy of Hello magazine, I'd probably have eaten it.

Why am I telling you this? Well, if I had gone to Hatfield Forest in Essex in 2018, I would never have expected to find any scones. There's no cafeteria at Hatfield - just a serving counter. I would have been completely prepared to settle for a more traditionally portable baked item. 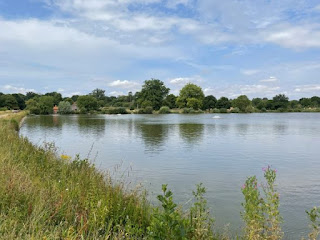 But then last week, someone sent me a photo of a scone being eaten at Hatfield Forest and I let my guard down. I recruited my niece Fay (the Craig Revel-Horwood of scones, as we saw at Lamb House and Croft Castle) and off we went.
I'll cut to the chase, readers: there were no scones. I couldn't see any when we arrived at the cafe/counter and so I asked if they were available. "We haven't got any yet," said the woman, at which point my heart leapt and I asked her when she expected them, quickly calculating how long I'd be willing to wait (2 hours probably my limit). "Tomorrow," she replied and so we settled for some rhubarb flapjack.
We then wandered off for a look around Hatfield Forest. A bit of history for you:
But here's an interesting fact: the last time I went to a National Trust property where I expected to find a scone but failed to do so was in February 2017 (Chedworth Roman Villa)! In 5 years of scone missions, I have always found a scone when the tea room was open. That is really impressive by the National Trust. Admittedly, I recently had a couple of tea room closures in Cornwall but that's a different challenge.
Anyway! The National Trust recently opened another property called Crook Hall Gardens in Durham so I've had to add one to my list - I now have just 13 properties left to go! Onwards to scone glory!
Hatfield Forest: 4 out of 5
Scones: 0 out of 5 - there weren't any
Realisation that out of 66 National Trust scone missions between 2017 and 2022, I always got a scone when I expected one: 5 out of 5
Other National Trust properties I have visited in Essex: Paycockes
Posted by National Trust Scones at 09:51 No comments:

Email ThisBlogThis!Share to TwitterShare to FacebookShare to Pinterest
Labels: Essex

I'm going to level with you here: until today, if you'd asked me to make a list of my least favourite words, then 'Dunstable' and 'down' would have been on that list. Why? Well, Dunstable and I fell out with each other some years ago (for relatively trivial work-related reasons that I won't go into), and down is not the cheeriest word in the English language.
As a result of this, I've probably been avoiding Dunstable Downs, or Dunstable Downs and Whipsnade Estate to give the place its full title. But I got out of the car in Bedfordshire today and the view literally took my breath away - it was not what I was expecting at all. I was genuinely astonished by it. 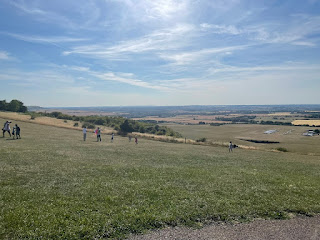 In fact, I was so taken aback by the spectacular views that I failed to take a picture of the bumps that cover the Neolithic burial grounds. Dunstable Downs has seven round 'barrows', which are believed to be the resting places of kings or chiefs. Over 90 skeletons from various periods have been found - in Saxon times about 30 bodies were buried with their hands tied behind their backs, which doesn't sound very hopeful.
But if walking on 5000-year-old burial grounds isn't your thing, then extra entertainment is provided by the London Gliding Club, which is based at the foot of the downs. Gliders and hang gliders come in and out of view, while kite flying is also very popular. 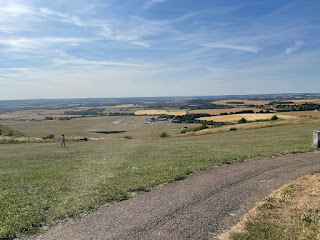 I had originally planned to visit Dunstable Downs in 2020. My friend Justine had agreed to bring her talented young baker daughter along so I could get her expert opinion on the scones. That was postponed, however, for yet more trivial work-related reasons. Young Evie takes after her mother, in that if you don't get in her diary early enough then you will struggle, as she is much in demand. So it was just me, Justine, and Evie's notes on her 2020 scone that made it to Dunstable Downs today.
The lovely modern cafeteria in the visitor's centre at DD gives you the opportunity to 'eat the scone' and 'see the place' at the same time, which I always love: 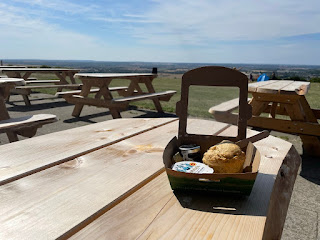 I was worried that the good weather may have caused a scone-buying frenzy and we'd be left empty-handed. But there were plenty of plain and fruit scones to be had. We did have a minor scare that there was no clotted cream but that turned out to be a false alarm, although the cream we did get was completely frozen and we had to thaw it out a bit. 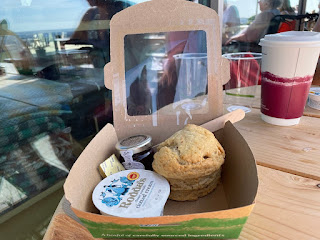 My plain scone was absolutely first-rate - large, fresh, crumbly and tasty. The fruit scone was a bit smaller but also tasty, according to Justine: 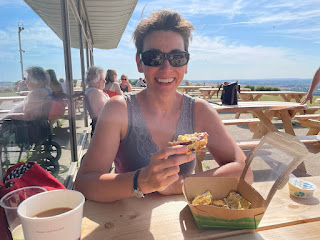 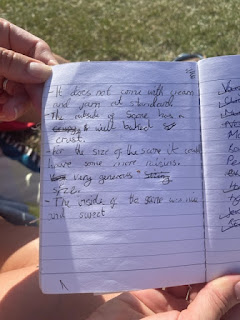 I'm not going to worry too much about the fact that Evie's review is way better than any of my reviews. I see it as an investment - in about 30 years' time she might repeat this National Trust Scone Quest exercise and write blog posts that keep me entertained in my nursing home.
So I highly recommend Dunstable Downs - for scones, tea and spectacular views.
Dunstable Downs: 5 out of 5
Scone: 5 out of 5
Added bonus of aircraft watching: 5 out of 5
Posted by National Trust Scones at 11:09 No comments: