I think East Riddlesden Hall will go down in scone blog history as the hardest-fought scone of all time. I've had my travel battles before but this one took the biscuit, thanks to Storm Eunice.

I have to tell you that I don't normally ignore travel advice. I'm usually the batten-down-the-hatches type, but I knew that if I timed it right I could get ahead of the bad weather and batten my hatches down in West Yorkshire.

I won't go into it, except to say my journey took nine hours instead of four.

Instead, let's get straight into the history of East Riddlesden Hall, which is located just a mile from Keighley station! 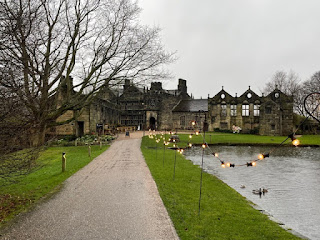 East Riddlesden reminded me of Cotehele in that it was a) very dark and b) one of those labyrinthine houses where you can never quite work out where you are or why there are so many rooms in a relatively small building. Or at least I couldn't.

The interior of the house was chopped up and remodelled several times during its history, as different tenants moved in and out. As a result, it has some oddities, like this very tiny bedroom with an enormous rose window:

My favourite line in the guidebook was without doubt this one: "During the 1820s East Riddlesden enjoyed the reflected glory of the celebrated Airedale Heifer" who was apparently "fattened on the estate". I was instantly fascinated by this Airedale Heifer and did some more research: "It was said to have been 3.5 metres (over 11 feet) long and weighed more than a ton and became a much-visited local animal celebrity until its slaughter following a serious injury in 1830."

I'm not sure I've encountered a "local animal celebrity" before. I was quite sad that she wasn't mentioned in the house (although I just checked the book and there's a picture of her in the kitchen that I must have missed). There wasn't any Heifer merchandise in the shop either. I'd have paid good money for a "I got fattened at East Riddlesden Hall!" mug or fridge magnet.

I don't want to worry any of the remaining places on my list, but I seem to have become the angel of doom for National Trust properties. An hour after I left East Riddlesden, they closed the place early because of snow. Ilam Park also closed early, an hour after I had eaten my scone there in January.

Or maybe I'm the National Trust scone ninja, using great skill and agility to grab my scone in the very nick of time before the weather catches me. To be honest, it's all quite stressful whichever way you look at it. But such is life for us hardy National Trust members venturing out before Easter.

Anyway. The tea room at East Riddlesden was really lovely. I was the only person in there, presumably because a) it was the first day of their season and b) it had literally opened about 20 minutes earlier. This in itself carries risk - is it fair to judge the first scone of a property's entire season? 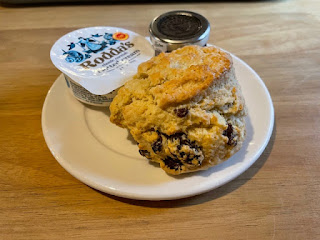 This was National Trust scone #194. As you can imagine, I've learned a few things from the previous 193 specimens. One of those things is that a perfect scone often dances on the precipice of disaster. Take the East Riddlesden scone today: it was still warm, which is always an encouraging sign (although not entirely surprising at 11am). However, fresh and warm can sometimes suggest that a scone is under-baked and I had to deliberate a lot on this today before adjudicating that it was, in fact, perfectly done.

I've also had to establish a Crumbleometer. According to me, if a scone disintegrates into more than six pieces during preparation or consumption, then it must be marked down. The East Riddlesden scone tottered on the edge today but remained intact enough for a top five star rating. Bravo!

Haworth and the Brontë Parsonage Museum

By now, you have probably realised that I am ruthlessly single-minded in my pursuit of a National Trust scone. I don't really like distractions. I can count on the fingers of...well, three fingers the number of occasions when I've combined my scone missions with a visit to another heritage location.

(For the record, they are: Tintagel Castle when I visited Tintagel Old Post Office; Hever Castle when I went back to Knole; and finally York Minster and the York City Walls when I went to Treasurers House for the third time and decided I needed to add a bit of  'value', so I wrote The Christmas Pudding Scone Tour of York.)

But I decided to make an exception on this trip, because just five miles down the road from East Riddlesden Hall is a village that I have wanted to visit for a long, long time.

Haworth was home to the Brontë sisters, and their former residence is now a museum dedicated to their lives: 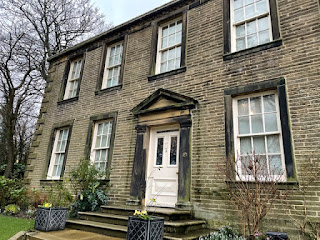 The museum was about to close for the day by the time I turned up, bedraggled and cold like a true Brontë heroine, although I'm not sure Brontë heroines typically wore a Brentford FC bobble hat that was, in retrospect, an unwise decision in Leeds United territory. Anyway, my lateness is the reason for the poor quality photographs. However, it was absolutely worth nine hours of train pain.

Below is the room where the sisters wrote their celebrated novels, Jane Eyre, Wuthering Heights and The Tenant of Wildfell Hall. If you've seen To Walk Invisible, the excellent BBC film about the family, you'll recognise it - although the parsonage is much smaller in real life than it seemed to be in the film. 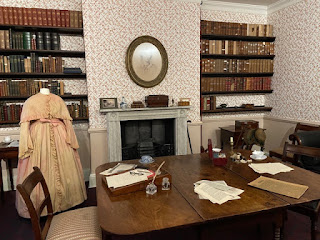 I then headed to the Old White Lion pub/hotel where I was staying and watched the Michael Fassbender version of Jane Eyre while Storm Eunice raged outside. (There have been 24 films of Jane Eyre! 24! And that doesn't even include the TV versions! I recommend the Fassbender one. Let me know which one you prefer, in the Comments.)

But I STILL wasn't done. I decided to throw caution to the (very strong) wind and add a third heritage stop to my trip. During my preparations, I had discovered that The Railway Children was filmed near Haworth on the Keighley & Worth Valley Railway.
It's an amazing thing: the Keighley & Worth Valley Railway originally opened in 1867 and ran for 95 years before the line was closed in 1962. However, a group of determined and dedicated enthusiasts worked to reopen the line in 1968 and restore it to its past glory, leading to its appearance in the 1970 film. The station at Oakworth is the one that appears in the movie and you can stop there during the five mile ride from Keighley to Oxenhope (you can go back and forth all day if you like).
And that's it! A miraculous feat, considering I'd attempted three heritage visits during a very bad storm and managed to successfully achieve all three! This really could be my year! Who wants me to come and force them to close their property early next??

Posted by National Trust Scones at 06:29 No comments: