I had originally decided not to include Carnewas at Bedruthan in this project. Although the NT website mentions a tea room, I had heard that it wasn't actually NT-run. The Ancient Rules of the National Trust Scone Blog (written last month) dictate that any tenant-run cafeterias are not mandatory to the quest and so I'd ruled it out on the basis that I probably already had enough on my plate. 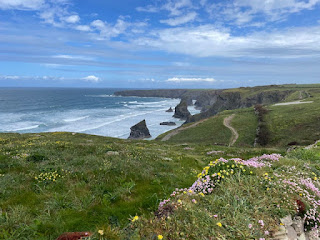 However, Carnewas is near Padstow and I'd never been there, plus the 2022 National Trust Scone Tour of Cornwall (see also Godolphin and Penrose) took me very close by. It seemed rude not to call in, so I added it to my list and headed off. My enthusiasm for a bonus scone was tempered somewhat by the pouring rain but I figured I'd manage.

The NT website had informed me that the steps down to Bedruthan beach are currently closed due to a rock fall. I won't lie - I was actually quite relieved when I saw them. It was windy and wet, plus it was also early, so there was no-one else around. I imagined myself being blown off the cliff and the Mystery of the Missing Scone Blogger making page 22 of the local paper, until I was found in the sea, wearing my flimsy coat and trainers, at which point all sympathy for me would have eroded.

Anyway, putting my mad imaginings aside, the views from the cliffs were spectacular. The sun came out and I wandered along the well-marked footpaths feeling very pleased that I had made the extra stop. 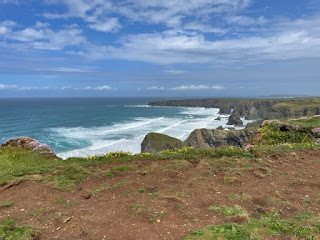 The tea room was also worth the detour. They go big on breakfasts, so I felt a bit weird asking for a cream tea at 10.45am. They delivered though, and I got two excellent scones with loads of cream and jam (I also got two plates, so I assume you're only supposed to share the serving between two people). 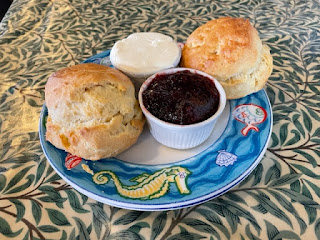 The scones were light and quite bready - they weren't Cornish splits but they were split-ish. They were perfection on a plate.

I then drove on to Padstow for a fish and chip lunch before heading to Pentire. The tea room at Pentire was closed, which I was sad about, but my arteries were probably overjoyed.

Posted by National Trust Scones at 08:40