To borrow a phrase from the great Brian Clough, Godolphin in Cornwall isn't the best National Trust property in the world but it's in the top one. That's obviously not quite true, as there's no such thing as 'the top' National Trust property, just as you can't really have a top song or a top book or a top Brentford player for the 2021/22 season (they're all Player of the Year as far as I'm concerned). But Godolphin is undoubtedly a fantastic place. 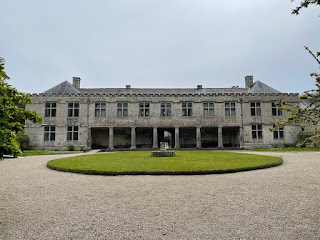 Where do I even start? I'm going to break with National Trust Scone Blog tradition and start with the tea room, as it gives you a good sense of the place. I actually walked right past it initially because a) it doesn't look like a cafeteria and b) there wasn't a sign for it. I later found out that there are very few signs at Godolphin because they're trying to keep the place as simple and uncluttered as possible. The house also isn't open very often, so check before you go.
In dire need of a cup of tea and my all-important scone, I consulted the map and saw "The Piggery", which is hands-down the best name for a National Trust tea-room. What makes it even better is that the building genuinely used to be a pig sty. In fact, you don't need a ton of imagination to actually picture that, as you'll see from this photo. You can probably understand why I walked straight past it. It's absolutely lovely inside, I promise:
And that experience set the tone for the whole place: a very quirky, impressive and fascinating property with lots of history. So let me try and tell you a bit more about Godolphin.

The Godolphin estate can be traced to the Bronze Age!

There is a plentiful supply of tin and copper within the Godolphin estates. Tools have been found linking the area to the Bronze Age of 2000-850 BC.

The present house is the third one built by the Godolphins!

The first reference to a house dates to 1166, but it was Alexander de Godolghan who built a fortified house and formal gardens around 1310. What was left of that building was demolished in 1475 by John Godolphin, who used the materials of the old house to construct his new abode.

The present house - looks smaller from the outside!

I have to confess that I couldn't really work out where the missing rooms should have gone and how the whole property would have been laid out. This is despite a human guide explaining it and me reading the guide book about 10 times. What I do know is that from the outside the remaining house looks quite small, but inside it feels big. I know. It's simply astonishing that the Architect's Journal hasn't offered me a job. 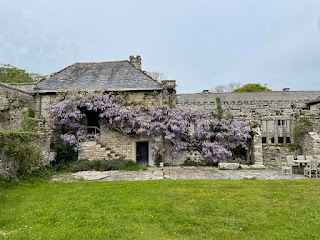 Francis, the 2nd Earl and owner of the famous horse mentioned below, married the Duke of Marlborough's daughter and had three children. His only son died young, however, and a cousin died childless, so the male line came to an end when Francis died in 1785. One of his daughters married the Duke of Leeds and the property passed to him. He was happy to keep the income from the tin mines but was not interested in the house.

The house fell into disrepair!

With no-one using the house, the usual thing happened: the pigs moved in. Tenant farmers started to use the decaying buildings to house their livestock and potatoes.

Sydney Schofield was the son of Elmer Schofield, an American painter. Sydney also painted but had decided to become a farmer. He bought Godolphin in 1937 and he and his wife devoted themselves to restoring the place. The National Trust acquired part of the estate in 1999 and then the rest in 2007.

It's now a holiday home!

I knew that the National Trust owns hundreds of holiday homes and apartments around the UK, but this is the first time I've visited a property that you can actually rent. It really is impressive - it must be great to spend a few days here imagining that you own the place. 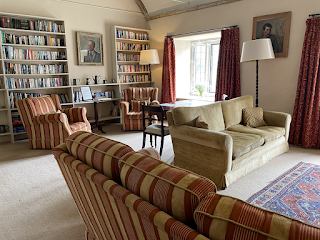 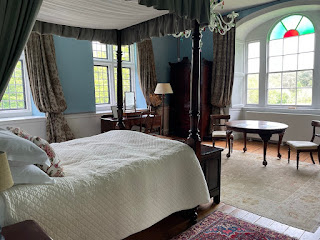 Godolphin - The Home of 'Godolphin'

I was vaguely familiar with the word 'Godolphin' before today, but had just lazily assumed it was the name of one of King Arthur's lesser-known knights or something like that. In fact, one of the uses of the word that I recognised - the Godolphin & Latymer school in Hammersmith - has connections to the family. One of the Godolphins died and his money was used to found a school. The school has changed location and shape over the years but the name has persisted.
The other use of 'Godolphin' that I had come across is in horse racing. The hugely successful Godolphin stable is owned by the Maktoum family but it turns out that this, too, is connected to the Cornwall estate. The stable is named after a famous horse, the Godolphin Arabian, who was one of three stallions from whom all modern thoroughbreds are descended. He was owned for a time by Sir Francis Godolphin, hence the name.

Until today, if you'd asked me for the most unexpected thing I've ever seen at the National Trust, I'd have said either the Dalek in the stable at Tredegar or the honesty box for sherry at Goddards.
But today I discovered Polly, the milkable cow. I can confirm that she isn't real, life-like as she may look. But it's a great idea and a very clever use of the area. 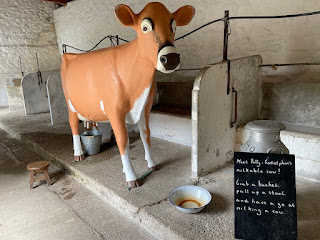 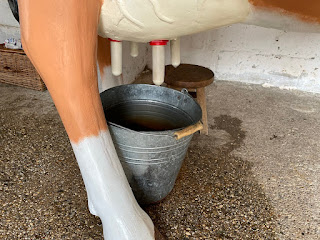 Another first today was that the assistant in the tea room took my order and then offered to bring it over to me when it was ready - I know it doesn't sound like much but tiny things often make a difference. The large scone looked unusually golden when it arrived, and it was warm. I had the usual 'is it a weeny bit underbaked?' conversation with my internal Mary Berry (this always happens when a scone is warm) but the scone world's version of VAR (or Video Assistant Referee to anyone not interested in football) ruled in favour of perfection. 5 stars to the Godolphin scone! 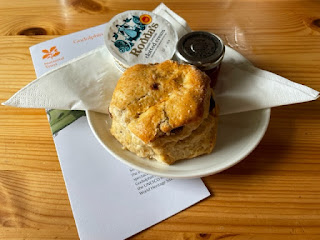 The best thing about Godolphin is that it just feels like a wonderful place. It has fascinating history, beautiful rooms, and lovely gardens and outbuildings. It has a Piggery. But more than anything, it's a lovely, calm but upbeat place and I highly recommend it.
Godolphin: 5 out of 5
Scone: 5 out of 5
Milking lessons: 5 out of 5
Posted by National Trust Scones at 12:10