Anyway. Today I discovered that the extremely photogenic maze at Glendurgan Garden in Cornwall is ten times as impressive and astonishing in real life as it is in the photos. You have to go and see it for yourself - put it on your lists.

Let's start with the maze. I'm sure everything else at Glendurgan gets fed up of playing second fiddle to it, but it's the star attraction for good reason: 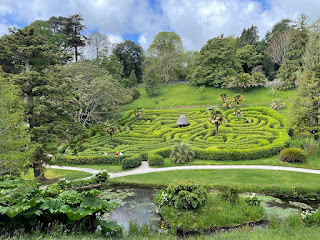 The maze was built in 1833 by Alfred Fox to entertain his friends. He modelled it on the maze at Sydney Gardens in Bath, although that was built on flat ground.

The guidebook says "it looks like a tea plantation in Assam" and that is absolutely true. It also feels like a tea plantation in Assam - if you're over 4' tall, you'll be able to see over the hedges as you walk around. I was thinking 'I can see exactly where I'm going - how hard can this be??' except it was hard. I would suddenly come to an unexpected dead-end, and it didn't matter whether I could see over the hedge or not - I still had to go back. It was a really interesting experience. 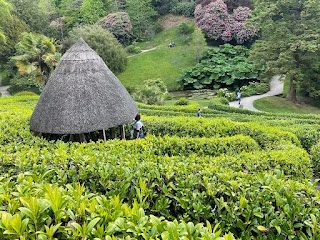 I was also completely shocked by the final paragraph about the maze in the guide book: "In 1991 the Maze was in a really poor condition and a decision was taken to restore it. The hedges were cut to ground level, the path surfaces were reinstated and the summer house added. Although a difficult decision at the time it has resulted in a maze in very good health."

Can you EVEN IMAGINE being responsible for the decision to raze the Glendurgan maze to the ground? And then being the one to actually go in there with the chainsaw (OK - maybe they didn't use a chain saw)? There's a photograph of it in 1991 and it looks like a muddy field containing some very small rose bushes. National Trust gardeners have stronger nerves than me, that's for sure.

But there's more to Glendurgan than the maze. I'll start with some history:

The other attractions include: 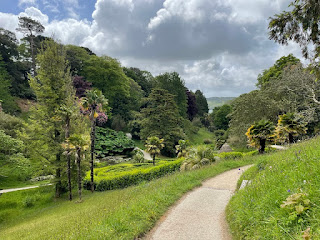 At the bottom of Glendurgan Garden is a small former fishing village called Durgan. It's tiny - it mainly consists of National Trust holiday properties. But it's a beautiful spot with a little beach for a quiet change of scene. 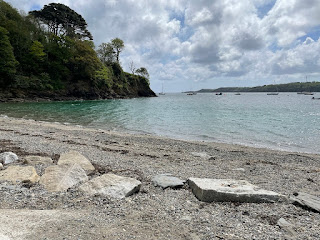 I recently heard a rumour that the National Trust employs stunt scones. This was shocking news indeed. I assume that National Trust stunt scones are varnished or made out of papier-mâché or something so they can make drawing rooms look lived in, rather than throwing themselves out of windows or getting blown up.
When I saw the Glendurgan scone today, my first thought was "this scone should DEFINITELY apply to be a National Trust stunt scone". It was HUGE. It was also the perfect colour with a good rise on it. Sadly for the scone, it never made it to the auditions because I was hungry and needed to eat it. It also turned out to look slightly better than it tasted. It was nice but a bit dry. 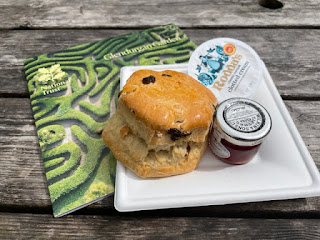 The Glendurgan Maze really does need to be experienced though, so put it on your lists next time you're in Cornwall!
Glendurgan Garden: 5 out of 5
Scone: 4 out of 5
Maze that looks easy but isn't: 5 out of 5
Posted by National Trust Scones at 23:48