Someone asked me at the start of the year how I was planning to celebrate the completion of the National Trust Scone Quest. I was a bit confused: surely eating 200 scones is reward enough? But I never turn down an opportunity to treat myself and so I decided that my self-prize would be a trip to a National Trust holiday property.

It's possible that you didn't know about National Trust holiday accommodation. There's loads of it: the NT has about 470 holiday cottages, as well as bothies and camping grounds and even hotels, all around the UK.

I love the thought of staying on a National Trust estate. In 2016, we did just that, when we went to Boscastle in Cornwall and stayed in an old pilchard cellar. They'd taken the pilchards out, thankfully. The building contained our holiday apartment as well as...big drum roll please...the Boscastle tea room. This was, and still is, extremely exciting to me. Some people dream of swimming with dolphins; I dream of living with National Trust scones.

So I scouted around for a treat destination and up came a holiday apartment on the Penrose estate, again in Cornwall. The apartment was in the old stables. I checked and the Penrose tea room was also in the old stables. I figured it probably wouldn't have two old stables - and I was right! I could BE AT ONE WITH THE SCONES. Then I thought: why wait until I've finished the quest to reward myself? I could claim my reward early AND visit my final Cornwall properties!

Except it didn't quite work out. The tea room at Penrose isn't open at the moment. The website said something about it not being ready for Easter, but I had taken the optimistic view that maybe they just hadn't updated the website recently. But no. The doors were closed and the oven was off.

I'm sure the closure had its benefits. The people that had stayed at Penrose before me had left a note in the visitors book saying "It's our third time here and it was so lovely and quiet this time without the tea room! But we missed the cake and sandwiches." Which probably sums it up.
But! The motto of the National Trust Scone Blog is 'NEVER MIND', and I was lucky enough to be doing a mini road trip, which meant I had Godolphin and other spectacular successes to make up for a small set back.
After I had stared forlornly at the tea room for 5 minutes, willing someone to open the door and say "Oh hi! We decided that 4pm on a Tuesday afternoon was the perfect time to reopen - how fortunate that you happen to be passing! Come in!", I realised that I didn't know anything else about Penrose at all. I had got totally distracted by my Hotel Sconeifornia and I was now at a bit of a loss as to what to do next. There's a big house on the Penrose estate but it isn't open to the public.
There were a few signposts to Loe Pool that pointed me along the path, so I set off. I soon found myself walking alongside a freshwater lake that is actually the largest natural body of water in Cornwall: 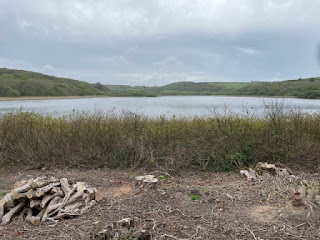 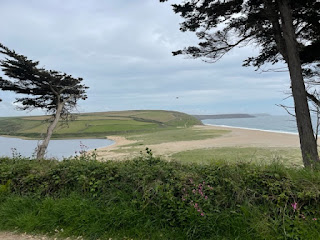 It was about 5pm when I finally got down onto Loe Bar, so there was hardly anyone else there. It just blew my mind that I could stand on the Bar and face one way towards a lake and lush green estate leading up a hill, and then turn 180 degrees on the exact same spot and be facing the flatness of the wild Atlantic Ocean:
It's a beautiful spot, but back in the day Loe Bar was extremely dangerous for ships and sailors. In 1807, a 44 gun frigate called HMS Anson sank with over 100 fatalities.
The Rogers family, who had bought the estate in 1771, had the "rights of wreck" up until 1881. This meant that any cargo belonged to them if a ship was wrecked in the area - this could (and did) include expensive wine among other things.
Before the Rogers family acquired the estate, it had belonged to the Penrose family. When their male line failed, the Rogers bought the place and built the stables and extended the house. By 1876 it was the 15th largest estate in Cornwall.
In 1974, the estate, along with Loe Pool and 4 miles of foreshore, were given to the NT by John Peverell Rogers. He retained the house and it passed to his son Charles in 2012. When Charles died in 2018, he appeared to have left no heir but his son Jordan Adlard Rogers (who had always known that Charles was probably his father) came forward and, following a DNA test, has now inherited the place.
Penrose is absolutely worth a visit for the highly unusual Loe Bar experience - although maybe wait until the tea room is open again and you can post one to me??

Posted by National Trust Scones at 12:43