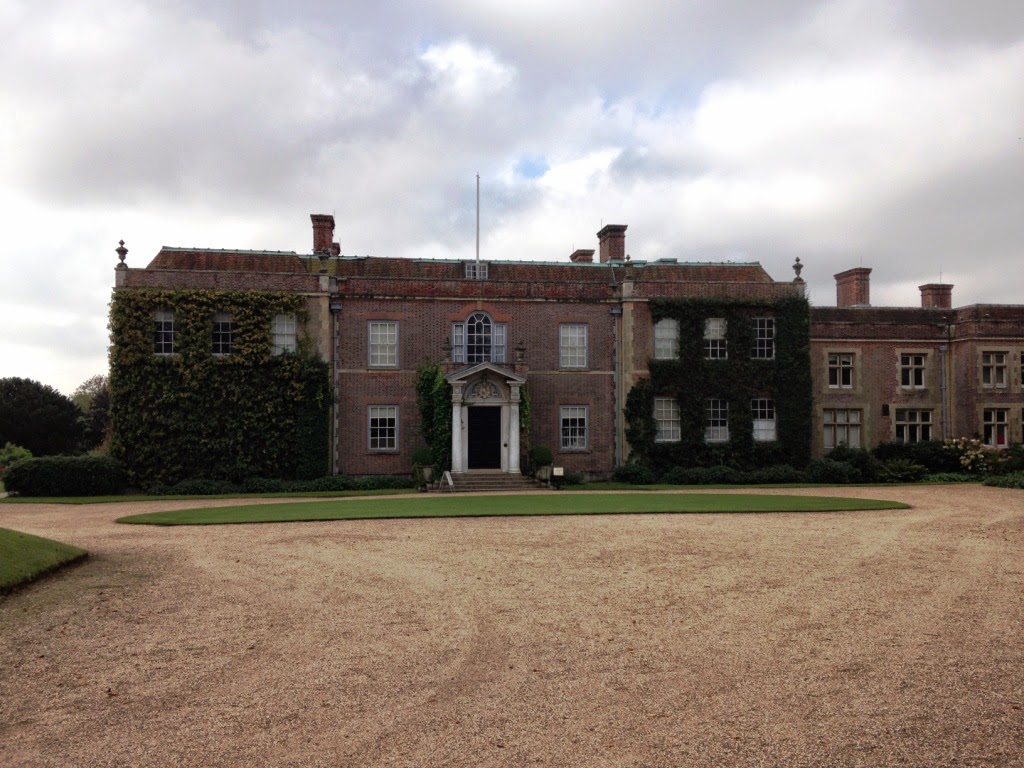 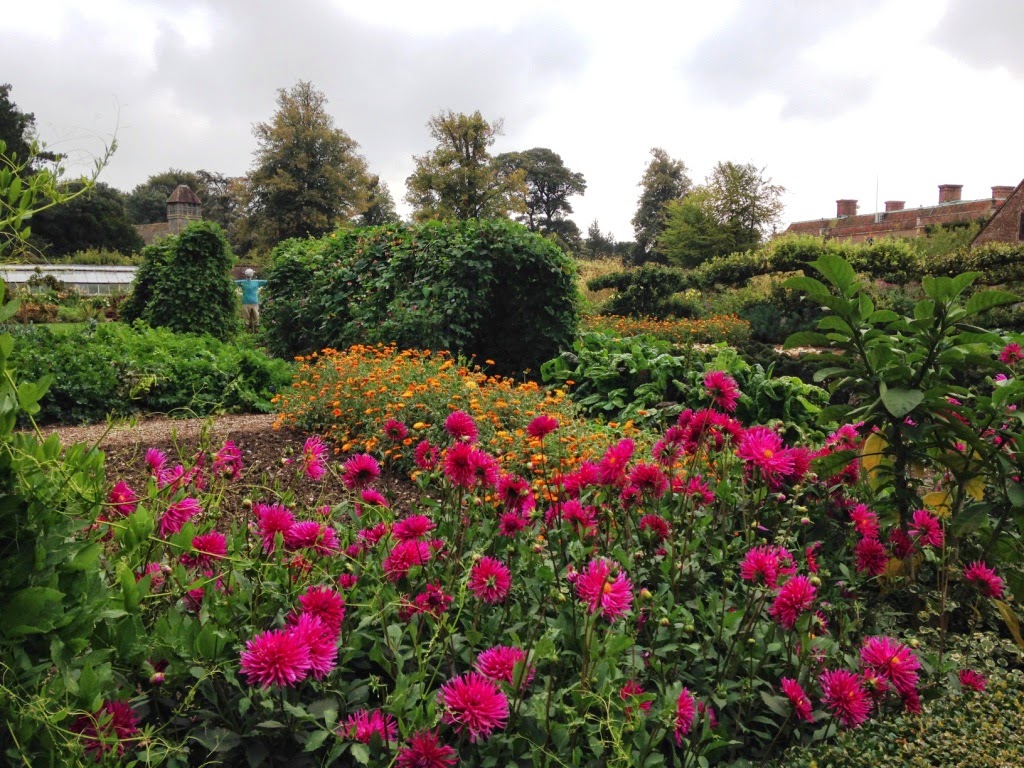 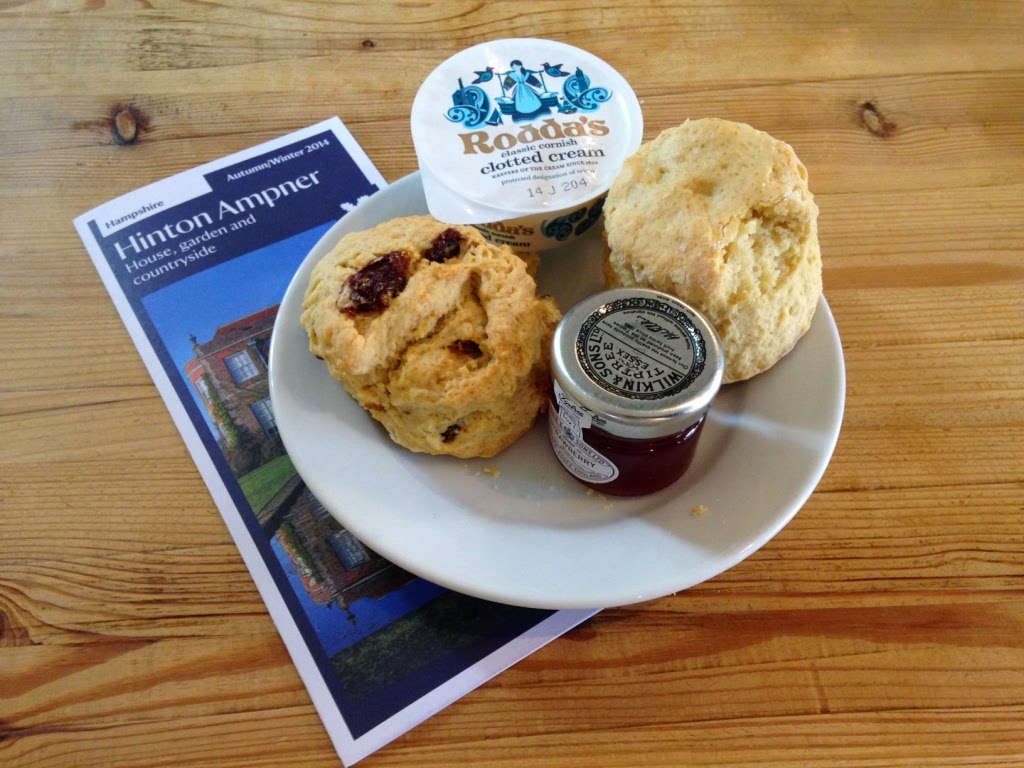 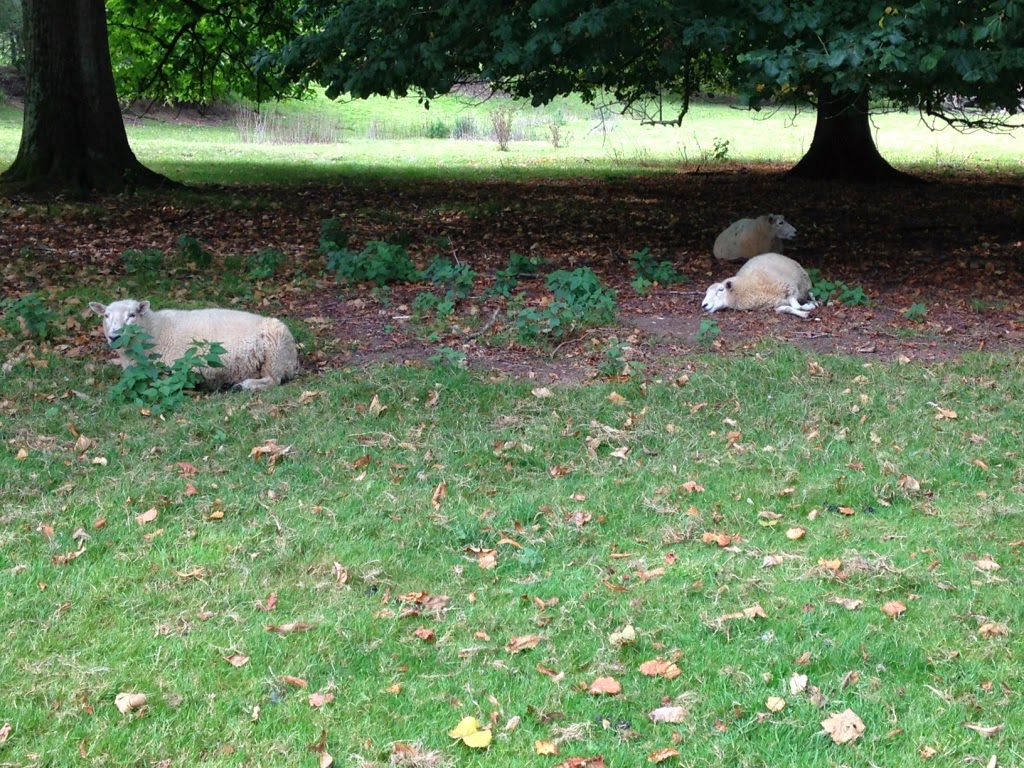 Posted by National Trust Scones at 12:09 No comments:

The Magna Carta is one of the things that my school didn't quite get round to covering during the 14 years of my education, along with other potentially quite useful stuff, like how to type or how to work out my mortgage repayments.

So I headed off to Runnymede today ready to be educated. This is the memorial to the Magna Carta: 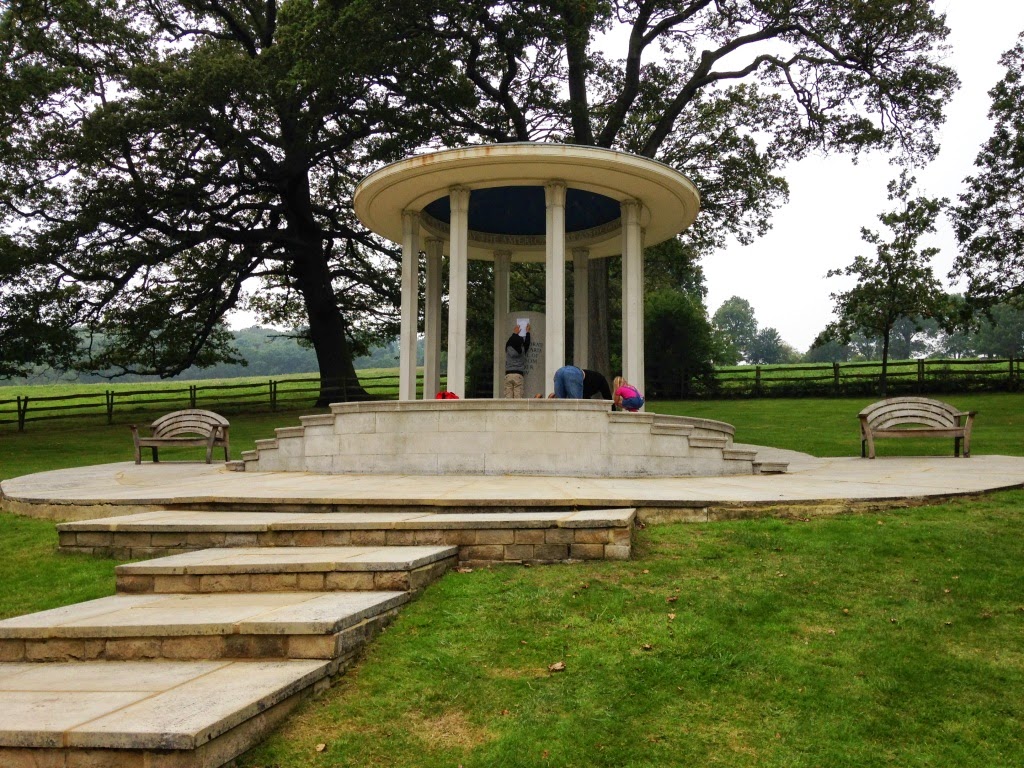 Please note that the children and man in the picture were not vandalising the monument, as I obviously would have objected if that had been the case and not just stood there taking photos of their backs. They were doing rubbings of the text: 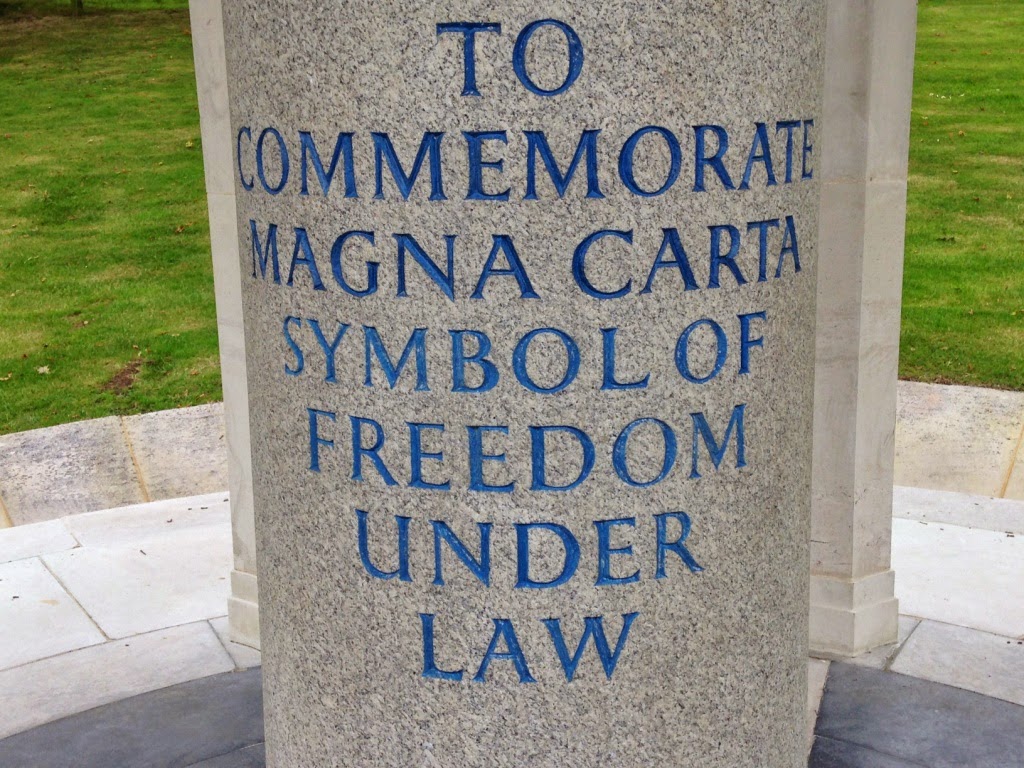 In case you too went to a school that didn't bother with Magna Carta, here's what I learned:
The importance of Magna Carta seems to be recognised everywhere but here in the UK. There's a copy of it in Salisbury Cathedral - if you ever go to Mompesson House then you can pop in and see it. It's always surrounded by people and 90% of them are from overseas.

Runnymede is also the site of the Kennedy Memorial, which was opened in 1965 by the Queen, Jackie Kennedy, and other members of JFK's family. A few years ago I went to Arlington in Virginia where John F Kennedy is buried and the Runnymede memorial had the same atmosphere of stillness. It's quite something.

The Runnymede scone
I hate to admit this but having just seen the birthplace of democracy and the sombre memorial to a man brutally cut down in his prime while pursuing freedom, it didn't really seem quite right to go and stuff my face with a scone.

Luckily, I had already done it - I started my visit with a quick stop in the tearoom, which was recently taken over by the National Trust. It has particularly friendly and helpful staff and they're very generous with their scones. They were a bit dry though and for the second week running the cream was more flaky than clotted. Maybe that's what happens in September - thousands of children are rounded up and forced back into school, 8,000 spiders decide to try and get into your house, and Rodda's cream turns flaky. C'est la vie I suppose. 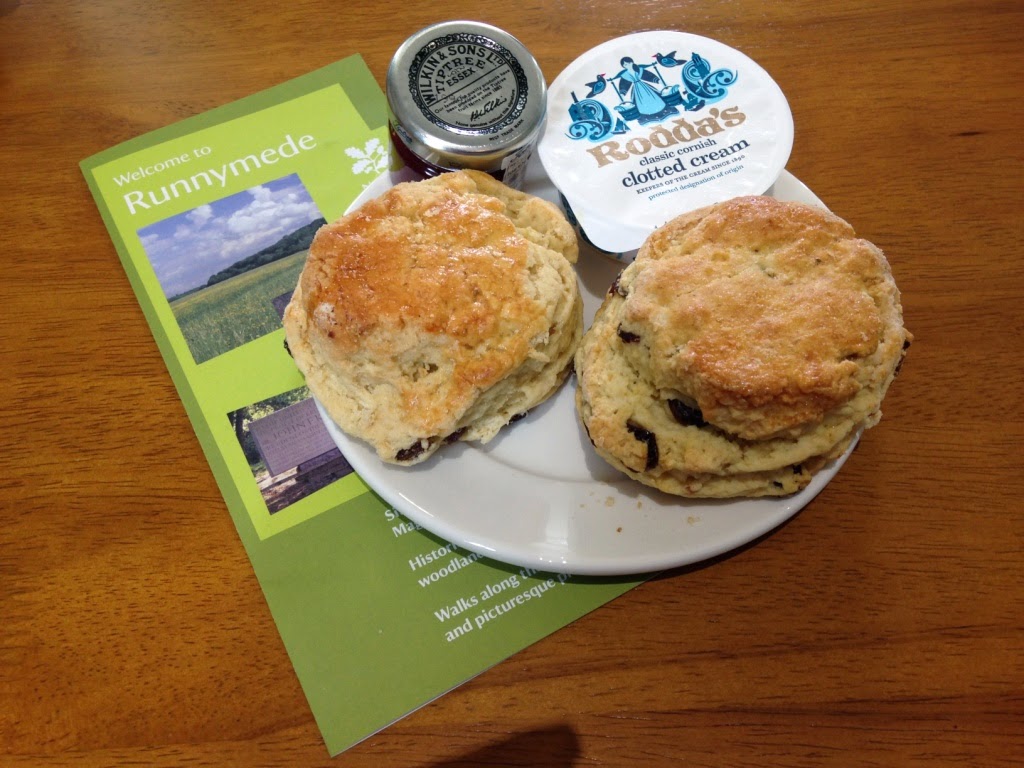 Anyway, Runnymede is well worth a visit. The Barons chose a beautiful spot for the sealing of the Charter and the memorials are nicely done.

You may be wondering why I returned to Flatford Bridge Cottage today, when I have approximately 500 National Trust properties still to see.

If you've been to Flatford, you'll know why. It's a stunningly beautiful little place. John Constable based many of his greatest paintings on Flatford and his scenes are still recognisable today, thanks to the National Trust who look after the buildings and countryside in Constable Country.

It gets my vote as the most idyllic spot in Britain. I would gladly and willingly pay the National Trust £58 a year for the upkeep of Constable Country alone. In fact, I'd probably pay them ten times that amount, but don't tell them.

Anyway, I covered the general story of John Constable and Flatford in my first post about Flatford and its scones in November 2013. But here are a few pictures from today's visit:

There was one moment of heartbreak for me today. Last time I came to Flatford I helped bake the scones. I remember being amazed at how the outside of the scone was so crisp, while the inside was soft and fluffy.

Well, it turns out that this wasn't down to me. The fruit scone today was exactly the same. I've eaten around 60 National Trust scones since I last visited Flatford and I haven't come across any other scones that achieve crisp vs fluffy perfection.

Flatford Scone of the Month
Flatford is on my World Scone Heritage List because it is brilliant at scones but also because they have a Scone of the Month. I arrived at the tea counter ten minutes after it opened - today being 1st September - and was HONOURED to be the very first person to buy an Apple & Blackberry scone. I'd seen about a billion blackberries in the hedgerows round Flatford and the tree next to the tearoom was about to keel over under the weight of all the apples, so it made perfect sense. It was delicious:

I'm going to end by giving you another helpful tip (the first tip being GO TO FLATFORD): I recommend staying overnight. I had noticed on my first visit that the granary once owned by John Constable's father is now a B&B called, cleverly, The Granary. It claims to offer "3* accommodation at 2* prices in a 10* location" and I wouldn't argue with that. Here it is:


We had a lovely evening wandering around the area and the best night's sleep I've had in ages, because apart from the odd quack there wasn't a sound.


So you haven't been to Flatford/Constable Country, go as soon as you can. If you've already been, go back. It is without doubt one of my favourite places in the world.

Posted by National Trust Scones at 09:41 No comments: