I had a Ladybird book when I was little that featured a picture of a giant tree in America that you could drive through. It was amazing. I desperately wanted to see that tree and drive through it, possibly reversing and driving through it again.

And last year we did it. We actually went to Yosemite National Park and saw that tree. Unfortunately there was no driving through it because it fell over in 1969. This was extremely disappointing - I was born in 1974, so the tree had toppled over long before I arrived on the planet. People sue each other for less than this in America, although who do I sue? Ladybird books? My parents? The tree?

Anyway. What has this got to do with Sunnycroft in Shropshire? 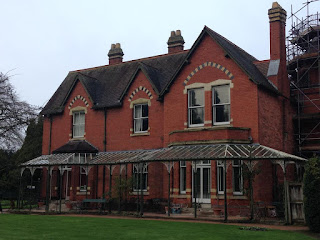 Well, my sad experience with the Fallen Tunnel Tree has not put me off giant redwoods, or sequoiadendron giganteum, and Sunnycroft has an avenue of them that was planted in 1899! The Scone Sidekick and I were overjoyed to see them today and we relived our time in Yosemite, with the added bonus that no massive bear was likely to come lumbering out of a hedge and take my face off with a swipe of her paw. 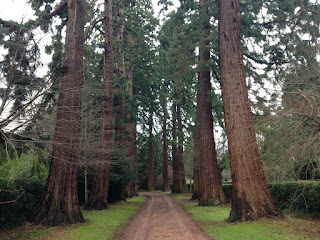 It took us almost as long to get to Sunnycroft today as it did to get to California*. There had been a frost during the night so naturally all the trains had stopped working. But we persevered and it was well worth it. Here's a bit of history:

A couple of my highlights from today's trip:

The house
I had read the guidebook before I went to Sunnycroft and have to say that it didn't exactly oversell the place; "Sunnycroft makes no claims to great architecture and is rather solid and conservative in style" is a sample line.

But I absolutely LOVED the place. It joins Hughenden, Packwood, and Avebury Manor on the list of NT properties that I would happily move into tomorrow.

The staircase hall is particularly beautiful: 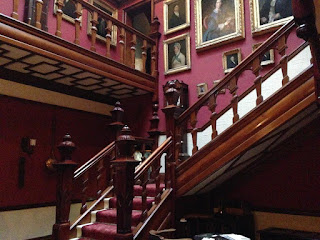 And the rooms were big but homely too, like the Drawing Room: 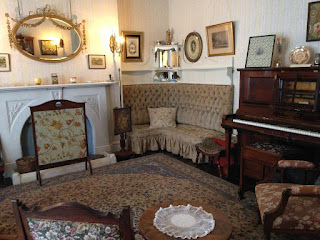 Joan Lander and her diaries
I've decided that Joan Lander is my hero. Today she put my mind at rest on a matter that has troubled me for years; the difference between mine and other people's diaries.

For example, political diaries when they are published always seem to sound something like: "Tuesday 4 October. Peter put both hands on the table and said "Mike, fiscal adjustment that targets deficit and debt reduction does not necessarily prevent fiscal instability." He was shaking with rage, his knuckles were white and his eyes had an unusual green-ish tinge to them."

My entry for Tuesday 4 October on the other hand reads "Spoke to mum. Had chips." And today Joan proved that I am not alone. Her entries - "We were going to have tennis, but it was much too wet, so Heath, Mary Leake and I played ping-pong, Daddy and Mr Leake billiards" - prove that people can keep simple diaries that end up being useful and interesting to other people. Alright, maybe not mine.

The Sunnycroft scone
The Scone Sidekick kept asking very helpful questions on our lengthy journey today, such as "what are you going to do if there are no scones? What if we've come all this way and there are no scones?" I was therefore VERY relieved to see a pile of scones on display when we reached the tea room. 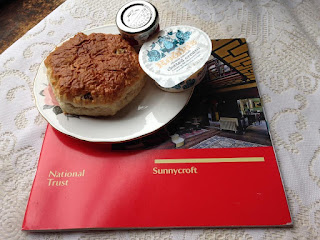 I have to say that it tasted a lot better than it looked. I'm not sure why, but shop-bought scones always remind me of someone that has been a little bit too fond of their sunbed. It was also a bit dry and metallic-tasting. But I enjoyed it and so did the Sidekick. They had other cake options too, and the tea room was fabulous - it's inside the house, so very much part of the Victorian house experience.

I'm going to end with a tip for the National Trust: find the lovely, lovely girl that was working in the tea room at Sunnycroft today and give her a job sharing her customer conversation skills with other staff and volunteers. She's a diamond.

*this may be a slight exaggeration
Posted by National Trust Scones at 13:14 1 comment:

However, I only remembered this when I was half way to Saltram in Devon this morning. It's one thing to sit in the car for 40 minutes and be disappointed, but it's quite another if you're travelling a long way. I was worried. 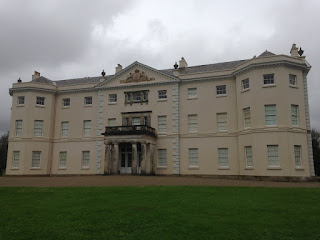 And I'll be honest, it didn't go perfectly today. Regular readers will know of my antipathy towards TripAdvisor reviewers that a) get the opening times wrong or b) moan about the weather but I'm about to do both:

1. The house was mostly shut. I had checked the website last weekend and it said Saltram would be open. And it was, partially - five rooms were accessible today and they were truly lovely. And let's face it, if Saltram only had five rooms, I would still have gone there. I also think they updated the website during the week to say that visitors should ring the property to check opening times. But I won't lie; I was disappointed.

2. The weather was AWFUL.

But the scone blogger's motto is NEVER MIND, so let's talk about the GOOD STUFF:

The Saloon
The Saloon at Saltram is a show-stopper. It was designed by Robert Adam - he did the ceilings, the walls, the chimney - and the result is spectacular. The guidebook doesn't do it justice - I highly recommend you see it.

The Fantastic Volunteer Room Guides
I could write a book about the interaction between National Trust visitors and volunteer room guides. There is an etiquette and I've seen many visitors get it wrong.

However, I don't have time to write a book so here's the general gist in one sentence: NEVER STEAL A ROOM GUIDE'S THUNDER. They are there to inform and astound you - you ask a question, they answer it, and you say "AMAZING! I did not know that!"

The only exception to this is if you have some sort of extraordinary knowledge to impart, eg "I worked here during the war, making top secret maps for bombing raids," as happened at Hughenden. The guides will welcome this, although they might not show it at the time.

Anyway, the room guides at Saltram today were particularly helpful and lovely. But in an unguarded moment, I broke the golden rule: in the Saloon, the guide pointed one of the pictures out to me. "It looks like the Gunpowder Plotters," I said. It was a pure guess from me - it was seven dudes looking over their shoulders in a furtive manner, what else could it be? To my surprise, she nodded and said "we think it might be, yes". I could see the disappointment in her face. I had stolen her thunder. I'm so sorry.

The Saltram Scone
This was my third Devon scone - the others were at Killerton and A la Ronde - and I can state that Devon scones are not the same as other scones. I know that everyone from Devon will now be rolling their eyes and saying "DUH!" but Devon scones are not as sweet - the cream and the jam do the work in that department - plus the Saltram scone was chewier.

The Saltram scone also had an air of confidence about it. This might sound a bit weird, and you're probably edging away and Googling the number of the nearest mental health facility, but the Lanhydrock scone in Cornwall was the same. It's like the scone was saying "I am what a scone should be - if you don't like me, that's your problem". But I am very tired, so maybe this is the fatigue talking.

It also amuses me greatly that you never get Rodda's cream (which is made in Cornwall) in Devon. The cream in Devon is thicker, less sweet, and you get more of it. It's probably a treasonable offence to eat Rodda's in Devon.

Anyway, it was a very good scone. I struggled a bit with the score - normally I know a 5 out of 5 within two bites and I had to think about this one - but I ate every crumb off the plate and that's a sign of excellence. The tea room was lovely as well - there was plenty of room and a very nice, relaxed atmosphere. I could have stayed there all day. 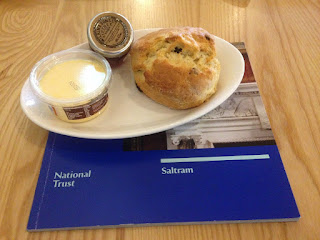 I am going to finish with a note to self. The Scone Sidekick bought me a pair of lovely wellies a few years ago and every time I see them in the cupboard I think "what a pity I never have an opportunity to wear my lovely wellies. Maybe they will come in handy during the Apocalypse," and I close the cupboard again.

But no more. From now on, during winter, I am going to put those wellies by my front door with a big sign saying 'GOING TO THE NATIONAL TRUST TODAY? WEAR THESE. DO NOT ARGUE.' I just can't take it any more - for the second scone mission in a row, I've been the bumbling idiot sliding into the mud in a pair of Skechers plimsolls, to the amusement/bafflement/irritation of booted and Goretexed visitors. But no more! 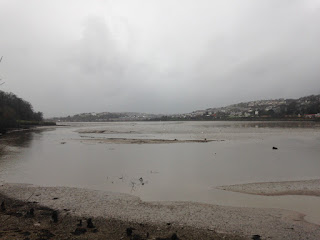 Saltram: 4 out of 5
Scone: 5 out of 5
Lovely room guide whose thunder was cruelly stolen: 5 out of 5
Posted by National Trust Scones at 01:20 No comments: