John Craven has been a very important influence in my life. He was also a major influence on this blog - in fact, I would go as far as to state that John Craven saved the National Trust Scone Blog.

We began our connection, John and I, as presenter and viewer (respectively) of Newsround, where he educated me on space shuttles and giant pandas. We later moved on to otters and turnip farms when he took up the reins at Countryfile.

But back in 2013, I was going through a crisis of confidence with this National Trust Scone project. I had only just started out with it, but was almost thwarted by a) a temporary lack of internet connection in my home, which meant that I had to go to my local pub to upload my posts (thanks The Swan) b) the fact that the very first place I went to had no scones in the restaurant and c) a general feeling that it was going to be a complete waste of time.

And then, that fateful Sunday evening as I contemplated quitting, I turned on Countryfile and what did I find? John Craven was baking National Trust scones! It was like a sign from the heavens - there he was, at Watersmeet in Devon, making a right mess of Fiona the resident baker's scones. All of my doubts fell away and I have never looked back. 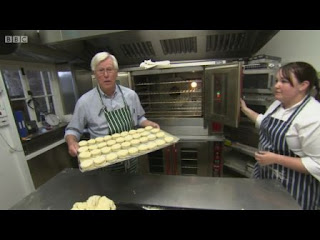 Ever since, Watersmeet has stood like a place of pilgrimage in my mind. Unfortunately, it was a tricky one to reach, being in North Devon. But today I finally made it there for the 180th mission on this scone quest. 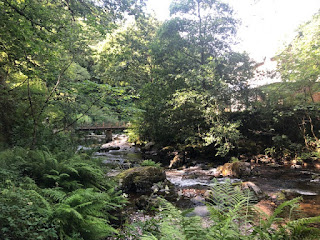 As it's a momentous occasion, I will break with tradition and start with the scones. I have had numerous moments of panic over the six years of this project, usually when I've travelled 250 miles and the only baked goods in sight are shortbread and flapjacks. Today's panic was off the scale. I was late getting to Watersmeet so I almost skidded the car into a parking space and abandoned it, running down the path in the wrong shoes saying "EXCUSE ME" to bemused holidaymakers as if I was exiting Holborn Tube station at 8.45am on a Monday morning.

And then total disaster loomed: no sign of any scones in the tea room. I started to panic-formulate the sentence in my mind - "Can you put the oven back on please? I'll explain later." - when suddenly it was my turn so I just blithely asked for a cream tea. "Strawberry jam or whortleberry jam?" the woman asked. I later discovered that whortleberry is the local name for bilberry and I probably should have opted for that but at this point it was all too much for me so I played it safe. 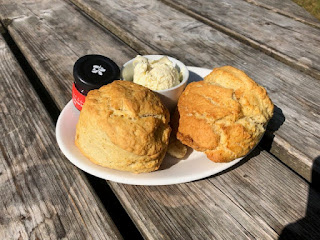 And what a treat it was: two big plain scones, fresh as fresh could be, served with a big pot of cream. The jam always has to do more of the heavy lifting in a Devon cream tea, as neither the scone nor the cream is overly sweet. But it was divine. I could only manage one scone but it was one divine scone. I will never forget it.

And I got to eat it here - what a stunning place to eat scones:


I had given myself a pass with this blog post - I decided not to worry about the history of the place and instead just focus on lapping up the sights and sounds. But I can never resist a factoid. So here goes:
There are numerous walks that you can do around the area - and I highly recommend that you spend a good few hours there. 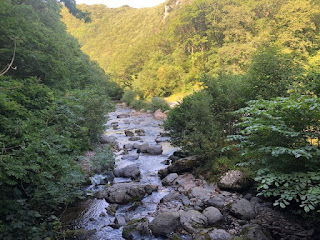 I'm going to close by going all John Peel on you. I also discovered a lovely song on Spotify called The Meeting of the Waters by Fionn Regan and it fits Watersmeet perfectly (or at least my experience of it - you might prefer Motorhead.)

In keeping with the mini surprises that Watersmeet has thrown at me since I started writing this blog post, I just looked for the video on YouTube to share it with you and it features Cillian Murphy. From John Craven to Cillian Murphy - that's the beauty of the National Trust Scone Blog. Thank God I didn't abandon it.

Posted by National Trust Scones at 00:33 No comments:

FACT: every National Trust property has a story. Every single one. Sometimes you have to work a little bit harder to find that story, and so it was with Mottistone Gardens on the Isle of Wight. My usual extensive pre-visit research (ie reading the National Trust website) was giving me nothing, so I was overjoyed when I finally found something on a random CELEBRITY NEWZ OMG site; Benedict Cumberbatch had his wedding reception there. 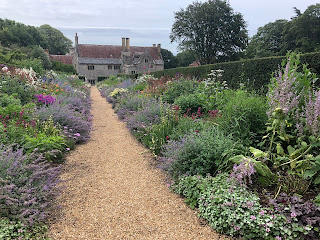 His choice of venue wasn't random, however; his wife, Sophie Hunter, is the great-great-grand-daughter of Jack Seely, 1st Baron Mottistone, who once owned the place. More tireless investigation by me (ie a bit of Googling) revealed that his nickname had been "Galloper" Jack and he was also the grandfather of Brough Scott, the horse racing journalist, who had written a biography about him. So I read that and ended up with about 8,000 stories.

But let me tell you a bit about the property itself. The first thing you need to know is that the manor house is tenanted and closed to the general public. The second thing is that the gardens are not open on Fridays and Saturdays. And so, with the bad news out of the way, here are the highlights of what you can actually see:

1. The Shack
It doesn't exactly oversell itself - I expected it to be an ice cream kiosk or an information centre for bored kids on school trips - but it's an amazing little building.

The story behind it is as follows: John Seely, son of Galloper Jack, was an architect. He built The Shack in 1936 as a country retreat and working office for himself and his business partner, Paul Paget:


Seely & Paget restored Mottistone Manor, but the firm also took on a lot of ecclesiastical work - as well as building new churches they also helped to restore St Mary's Islington and others that had been damaged by the Blitz.

But it's the interior of The Shack that is really surprising. It has nearly everything - two beds, kitchen, toilet, desks, even a letterbox - and all with high quality finishing. It's quite something:


The Gardens
There's plenty to see in the gardens. There's a huge double herbaceous border, a rose garden, a kitchen garden, a turf maze, even a scarecrow that looks like Jeff Lynne of the Electric Light Orchestra:


The View from the Grassed Terraces
It takes about five minutes to walk up to the terraces above the gardens - it's well worth it for a lovely view over the Manor and out to sea:


But let's return to Galloper Jack. There are about 8,000 quotable stories about him in the biography - he was a great friend of Winston Churchill and shared a similar life history of military and political derring-do - but here are the five key things you need to know:
It's an interesting book about a very colourful man of his time. He died in 1947 and his architect son became the 2nd Baron Mottistone. (Jack's eldest son, Frank, fought with him in France and died at Arras.) John gave the estate to the National Trust when he died in 1963.

The Mottistone scone
But let's move on. Sadly there is no Scone Horse to accompany me on my expeditions, although I'm not sure they'd have let one on the Isle of Wight ferry anyway. Instead, I recruited my in-laws for the voyage. It wasn't their first rodeo - two of them had accompanied me to Lamb House in Rye last year, where they had stunned me with a stinging critique of the scone. At Croft Castle the scones were so good that nobody had a bad word to say. So how would Mottistone fare? 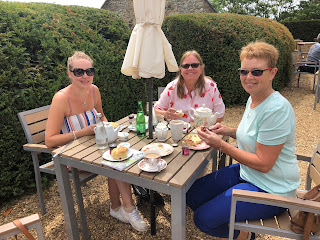 The short answer is that we found scone perfection. They were fresh and light and tasty and got a unanimous thumbs up from the panel. The service was great, and the outdoor tea room by The Shack was a beautiful place to sit on a sunny Sunday morning. 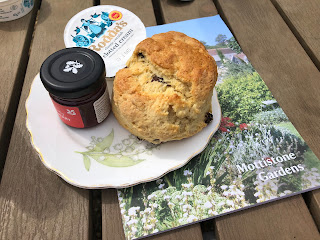 So that means that the Isle of Wight has ended up with an enviable 100% record for National Trust scones. You can read about our earlier trip to The Needles Old Battery, which not only scooped 5 scone stars but were my Scone of the Year for 2017.

Mottistone: 4 out of 5
Scone: 5 out of 5
Levels of derring-do by Mottisfont owners and their horses: 5 out of 5

Posted by National Trust Scones at 00:38 No comments: