So I took a quick look at the very small number (only three in fact) of Terrible reviews of Wentworth Castle Gardens before I set off for Barnsley, fully expecting to take absolutely zero notice of them. But there it was: 1 out of 5 - "There was nothing of any interest to see. Scones in the cafe were good though."

This stopped me in my tracks. My initial response was outrage - if the scones were good then it's a cast iron five out of five! Even if the rest of the property was a cabbage patch! Who are these people?

But outrage quickly gave way to great hope. Here was someone with standards beyond the reasonable admitting that the Wentworth Castle Garden scones were good. I could be in for a real treat.

Anyway. Before we get to the big reveal re the scones, here's a bit of history about Wentworth Castle Gardens. There was no guide book so I had to glean what I could:

But let's move on to the all-important scone. Have you seen the film Super Size Me? It's about a man (documentary maker Morgan Spurlock) who only eats McDonalds food for 30 days. One of his rules is that every time he is offered a Super Size meal, he has to accept and eat the larger portion.

I'm now exactly like that, only with Scones of the Month instead of Big Macs. If a National Trust property offers a fruit scone AND a temporary guest scone then I have to try both. It's the rule. The first time I did this (at Nostell and then at Erddig), I felt like a terrible Bruce Bogtrotter-style glutton and literally cringed myself into muscle spasms as I proffered my tray at the woman on the till - "so you want one cup of tea...and TWO scones?" - but I'm glad to report that I now don't care a single jam-covered jot. I've eaten 200 scones on this odyssey - what's another 350 calories?

So I was overjoyed today to see a display of Cherry & Vanilla Scones of the Month. They looked utterly delicious and they smelt delicious too; so delicious in fact that I broke with tradition and tried the C&V first. It was divine. So full of cherries that it had turned pink. 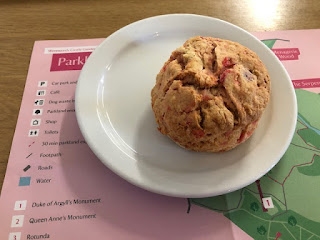 BUT. In the spirit of full disclosure, I need to tell you that the display for the Cherry & Vanilla scone also featured a copy of the Book of Scones. You'd probably expect me to be delighted by this, and I am indeed always enormously grateful and happy to see it. But it puts me under huge pressure to love the scones, and that is one thing I cannot do. I cannot cheat you, readers. If the scone is not worth a 5 out of 5, it is not getting one.

So I turned to the fruit scone with some trepidation. I cut into it and it looked dry. I was almost glad. And then I ate it and it was utterly perfect. Just the right side of chewy and full of fruit. An indisputable 5 out of 5. 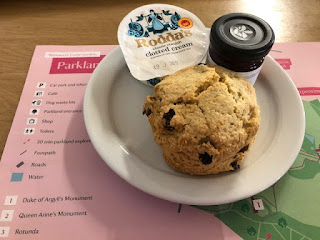 If you've seen any really good 'Terrible' reviews of NT properties on TripAdvisor, let me know. Let's see if we can top the review that complained that the walls between the toilet cubicles at West Green House Garden were too thin.

Yorkshire has been a very happy hunting ground for the National Trust Scone Blogger. Other Yorkshire properties scoring 5 out of 5 were Nostell Priory, Nunnington Hall, Fountains Abbey, Goddards, Beningbrough Hall, and Treasurer's House. Only Hardcastle Crags came in under 5 in Yorkshire but it was still a great place to visit.

Posted by National Trust Scones at 09:00