I try not to be overly impressed by National Trust properties that have appeared on TV. However, Fountains Abbey near Ripon was in the video for Maid of Orleans, the atmospheric 1981 electro-hit by Orchestral Manoeuvres in the Dark, which IS worth writing home about (although I'm not actually going to write home about it, as my parents wouldn't have the faintest idea what I was talking about).


In the video, Joan of Arc rides her behatted horse around the snow-covered ruins, until she is sadly murdered. I knew I was unlikely to see any snow - in fact, the sky was beautifully blue when we set off, so I was congratulating myself on some excellent scone scheduling.

I checked my weather app later and it told me to expect cloud in York. Never mind, I thought, that means atmospheric pictures of the ruins. But the rain was tipping down when we reached Fountains Abbey - the only pictures are of me and the Scone Sidekick staggering around like drowned rats.

Of course, the upside of visiting during a torrential downpour is that we were pretty much the only ones there. I imagine this is a rare treat - Fountains Abbey is the National Trust's 5th most popular property, with a staggering 373,364 visitors per year.

Things I Managed to Do Today:

1. Visit Fountains Abbey
Fountains Abbey is AMAZING. It's huge and it leaves you astounded - firstly that anyone managed to build such a thing over 800 years ago, and secondly that so much of it is still there. There are plenty of other abbeys that were closed during the Dissolution and ended up being rebuilt as homes for bigwigs - Lacock Abbey for one. Fountains Abbey is very different - you don't need much imagination to picture what life was like for the monks who lived there. 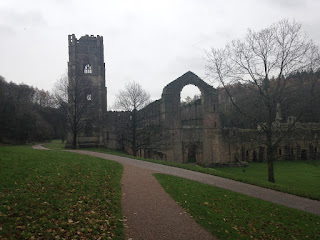 Some brief history:
2. Eat Fountains Abbey scones
Poor old Fountains Abbey was under extreme pressure today. Every other NT property in Yorkshire that I've visited has scored top marks for its scones; Goddards and Beningbrough Hall both got five out of five in July, while Treasurer's House has a special place in the Scone Blogger's heart for its fabulous Christmas pudding scone.

The fruit scone at Fountains Abbey looked extremely solid. It was almost too solid - I was a bit concerned about it, to be honest. But it turned out to be delicious - it was crisp on the outside and good and fluffy on the inside. I came very close to knocking off half a point for the hard and flaky Rodda's, but the scone held its own so I didn't. This means that Yorkshire holds on to its unblemished record. Nunnington Hall and co - it's all resting on you in 2016. 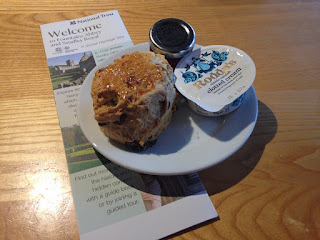 I was also OVERJOYED to see that Fountains Abbey was selling Christmas scones. It was lovely - it tasted of festive spices and fruit and I enjoyed it very much. 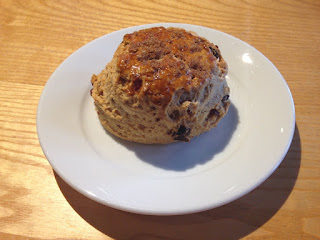 But now we must be honest and consider the Things I Didn't Manage to Do Today:

1. Visit Fountains Hall
Fountains Hall was built between 1597-1604 by Stephen Proctor, who had bought the land near the abbey. The Hall was eventually acquired by the Vyner family in 1923, who often entertained the Duke and Duchess of York (who later became George VI and the Queen Mum). You'd think that I would have welcomed any opportunity to get indoors today, but I was scared that I'd get in the warm and never want to leave. At least I have a reason to go back.

2. Visit Studley Royal Water Garden
The other reason I'll have to go back is to see Studley Royal Water Garden. I just couldn't face trudging around looking at water features today, when my shoes were rapidly turning into water features of their own. This was a shame because the garden was made a World Heritage Site in 1986 and it sounds amazing - it was originally created by John Aislabie who started planning around 1718 when he owned the Hall. It has canals and all sorts in it, so I'll definitely return one day.

3. Visit Brimham Rocks
I'm also going to 'fess up to you and admit that I had planned to visit Brimham Rocks today. I knew there wouldn't be any scones there, because they don't have a tea-room, but they do have very weird rock formations that look a bit like E.T. and have names like 'The Dancing Bear'. How can anyone resist that? (Plus - and I'm spoiling you with the pop-picking facts today - Brimham Rocks were in a Bee Gees video.)

Let me also tell you now that I am not easily defeated by rain - I am half Irish for one thing and I was also in possession of a newly purchased National Trust umbrella (£8). But when we pulled up in the car park at Brimham the rain was so heavy that the Scone Sidekick literally opened his car door, said the single word "no", and shut it again.

I eventually persuaded him to venture out for a look (I was helped quite a lot in this by his bladder) and we squelched along the path. Then he just refused to go any further, like a horse at Becher's Brook, and so we returned to the car and gave up.

4. Visit Treasurer's House
I had also (ambitiously) been hoping to fit in a trip to Treasurer's House for its world famous (according to me) Christmas pudding scone. But the Sidekick had started talking about pneumonia and so I reluctantly decided to cut my losses and take him to the pub, where he cheered up enormously. It broke my heart to be within two miles of the Christmas pudding scone, but the Sidekick had to come first.