I love the city of Bath but let's be honest; it has not been kind to the National Trust scone blogger.

I set off for Prior Park Landscape Garden today knowing that this mission was make or break. If I found a phenomenal scone and a fascinating history at Prior I would be willing to forget the disastrous day of no scones and limited access at Bath Assembly Rooms. I would also overlook the fact that I couldn't even FIND Bath Skyline (although I will accept some culpability there on account of my inability to read a map). 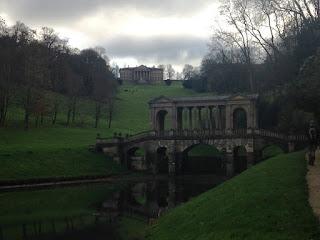 I have to admit, though, that I wasn't very hopeful. In my experience, landscape gardens are great for a nice walk but they don't tend to deliver the pet baboons called Bimbo or wives eloping with curates to Portugal that you get with some of the great NT houses.

However, I did some reading and discovered that Prior Park was created by a man called Ralph Allen. I had never heard of Ralph Allen. I learned that he made his fortune by improving the postal system and buying some quarries, so I bought a book about him and prepared to be a bit bored.

But Ralph Allen, Builder of Bath by Diana Winsor wasn't boring at all. In fact, I got so caught up in reading it that when I caught my first glimpse of the mansion I thought "that's Ralph's house!!", as if we were best pals and he himself was waiting for me with tea and scones and £1000 that he wanted to donate to my next novel or political campaign.

Anyway, here are a few fascinating facts about Ralph and Prior Park.

1. He made his first fortune in the post service
Ralph was born in Cornwall where it is believed he helped his grandparents with their inn/post office. He moved to Bath and soon scooted up the ladder to become Deputy Postmaster. It sounds like he was an honest sort who stamped out (ha!) any dodgy dealings and greatly improved the profitability of the post service. He retained the contract for over 40 years.

2. He made his second fortune from Bath stone
Ralph believed in the qualities of Bath stone as excellent building material and was soon buying up the local quarries. He befriended John Wood the Elder, who had visions of turning Bath into the beautiful city that we recognise today. They worked together to create Prior Park as a showcase for Bath stone, although it sounds like they fell out a fair bit. The mansion is now a school so you can only admire it from afar.

3. He created tourist attractions
His first attraction was a bit of an accident. He commissioned a type of railway to bring his stone down to the canal so it could be shipped to London. People were fascinated by the mechanism, coming from miles around to marvel at it. In Prior Park itself he built a Palladian bridge that was soon attracting sightseers, as it still is today - it's one of only four Palladian bridges in the world (one is at Stowe, one at Wilton House, one in St Petersburg). 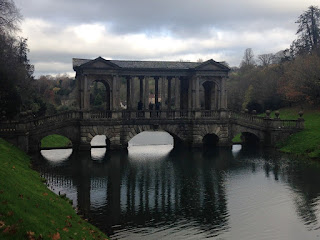 4. He was a man of the arts
Ralph loved Bath and was its mayor from 1742-1769, but he wasn't very keen on all the gambling and frivolity that went on. He was far more interested in literature and was friends with many writers - Henry Fielding based the character of Squire Allworthy in his novel Tom Jones on Ralph.


But was Prior Park able to deliver on the all-important scone front? The short answer is no. However, the 'tea shed' was an outdoor cafe and it had a) carrot cake and b) a brazier for warmth, so I decided not to be a misery about it and enjoy the lovely view. 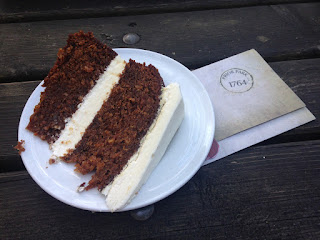 But it doesn't alter the fact that I've now had two scone fails on the trot - last week's mission to Woolsthorpe Manor only delivered apple shortcake. This unnerves me. I will have to sack myself if it goes on much longer. Luckily the Scone Sidekick has agreed to join me on what I hope will be a sconestravaganza next week, so stay tuned.

Prior Park Landscape Garden: 4 out of 5
Scones: 0 out of 5 (there weren't any)
Ralph Allen as man I would choose as my ancestor over baboon owners and scandalous elopers any day of the week: 5 out of 5
Posted by National Trust Scones at 10:50