I have a secret affection for National Trust properties where you approach the house saying things like "There it is! It's nice. Quite small and, er, I can't see any sign of the enormous multi-year roof repair project from here. Maybe they haven't started yet?" before you turn your head to the right and see the enormous Tudor house that you're meant to be looking at, rather than the random outbuilding you've been admiring for 10 minutes. 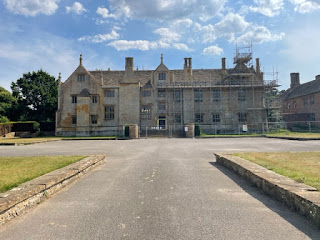 I'm not a heritage professional but if I was and someone told me that the building I was working in needed roof repairs, I would put my coat on and never, ever come back. I can't think of anything worse. Roof repairs take years and cost millions and cause total upheaval for something that 99% of visitors will never directly see or appreciate. It must be absolutely awful. 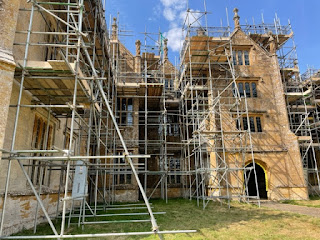 Anyway. You've probably gathered by now that we didn't get to go inside Barrington Court as it's closed. But it's a fascinating place so I'm going to share some details anyway:
It was restored by Arthur Lyle of sugar fame
It's an amazing story: Barrington Court was gifted to the National Trust in 1907 - it was actually one of its first acquisitions. But Barrington was a partial ruin and, with no endowment money, it threatened to become a huge drain on NT resources. Luckily, Colonel Arthur Lyle came to the rescue. He was the grandson of Abram Lyle, who invented Lyle's Golden Syrup. He took on a 99-year lease of Barrington and began the long process of restoring it with his architect, James Edwin Forbes.
Gertrude Jekyll worked on designs for the gardens
Jekyll was 74 when she worked on Barrington, with failing eyesight. She never actually visited the place and had to rely on drawings, biscuit tins of soil samples and visits from Colonel Lyle's wife, Elsie, who did much of the planting. I was pleased to read in the guidebook that Jekyll had a "dislike of rich people who gardened only through 'hirelings'", so she'd have approved of Elsie getting her hands dirty. (She would have approved of me too, as you won't find any hirelings in my garden. You won't find anything else either, but never mind.) 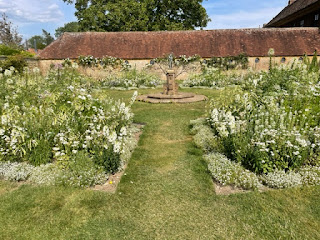 The house was completed around 1560
A London merchant called Sir William Clifton actually built the house. His son John succeeded him but then it all went wrong - his son, Gervase, ended up in the Fleet Prison, where he killed himself. Gervase's son was mauled by a bear at a bear-baiting event and died of his injuries. The Strode family then acquired Barrington and extended it with an impressive stable block.
It appeared in Wolf Hall
Barrington was in the BBC adaptation of Wolf Hall (as was Montacute, which isn't far away). It had a starring role as York Place/Whitehall, the home of Cardinal Wolsey.
The stables became Strode House
There are quite a lot of secondary buildings at Barrington. The impressive stable block built by the Strodes was restored by the Lyles so they could live there. It's a really striking building in its own right: 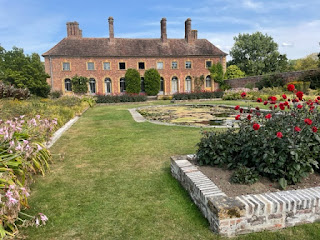 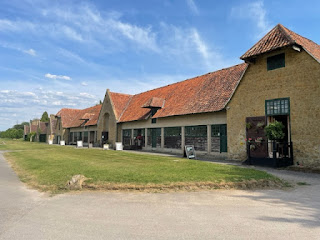 Barrington was the final stop on a mini Somerset road trip. We'd started at Lytes Cary, which is a beautiful place but the scone wasn't the best. We then went to Knightshayes, which is a barnstormer of an NT property, where the scone was a bit better.
The Barrington scone didn't fill me with hope. It looked a bit over-baked and I was fearing the worst. But it was actually very nice. It was fresh and tasty and I ate all of it. 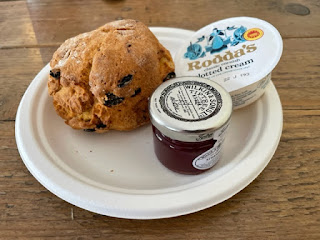 I'll hopefully get to go back to Barrington when the roof is fixed, as the interiors look very impressive even if they are empty. In the meantime, I'm sending all my positive thoughts to the Barrington team - it can't be easy running a National Trust property that's actually shut.
Barrington Court: 3 out of 5 (I'm sure it would be a 5 when the house is open)
Scone: 4.5 out of 5
Gertrude Jekyll's approach to life: 5 out of 5
Other National Trust scones in Somerset: Bath Assembly Rooms, Bath Skyline, Brean Down, Coleridge Cottage, Dunster Castle, Fyne Court, Holnicote, Lytes Cary, Montacute, Prior Park, Tyntesfield
Posted by National Trust Scones at 00:19