Some National Trust properties are very difficult to reach. Lindisfarne and St Michael's Mount are the obvious examples, what with the small hurdle of 'the sea' being in the way. A tide timetable is a basic requirement for both of those before you set off.

But I'd also put Overbeck's in Devon up there. That sat nav that has never let you down? You'll be threatening to throw it into the sea as you inch up single track roads, swearing that surely no tourist attraction could ever be down this ridiculous path.

And then you find it and all is forgiven, Google Maps: 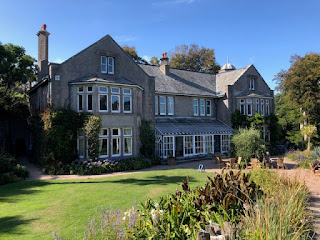 I hope the NT doesn't mind me saying this, but the house itself is probably fourth on the list of highlights at Overbeck's. The amazing views, the beautiful gardens, and the lovely tea-room would certainly be higher on mine.

This is the view of the Salcombe estuary from the top of the garden: 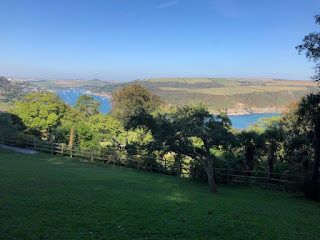 But there is a house and I will gladly give you some history of it:


The gardens are fabulous. The Statue Garden is very structured and neat, with beautiful colours and fragrance: 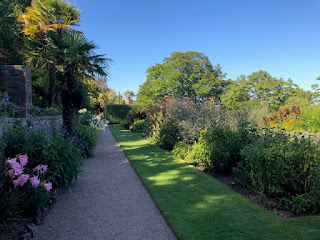 There's also a banana garden, where the shelter from the elements also supports other impressive tropical plants: 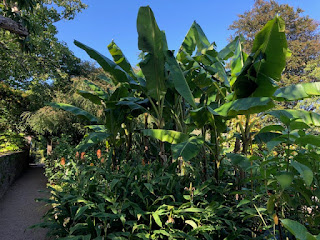 The Overbeck's Scone
But let's move on to the scone. I'm taking the education of future scone buffs very seriously as I enter the final year of my National Trust Scone Odyssey. I was therefore delighted to be joined on this expedition by two young aficionados called Olivia and Amy, who also brought their parents along.

In fact, very little training was required by the girls (the parents were a different matter). They were spot-on in their final assessment - the older fraternity wanted to award 5s willy-nilly, or try and take marks off for wasps (what??), but Olivia and Amy were firm on 4.5 out of 5. This is exactly what I would have given, and they managed it without six years of trekking around the country consuming 8 gazillion calories. Great work, apprentices. 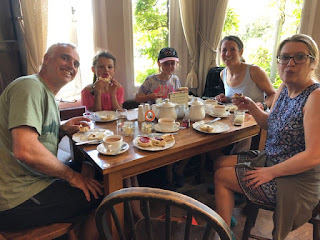 The Overbeck's scone: fresh, tasty and full of fruit: 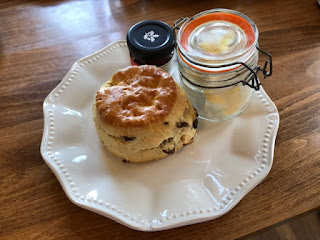 The tea room is also inside the house itself, which is always a bit special, but this one has the added bonus of spectacular views down over the estuary. It really is the most perfect place to eat scones and drink tea on a sunny afternoon.

Overbeck's: 5 out of 5 for the amazing views and gardens
Scone: 4.5 out of 5
The very Instagram-friendly plate: 5 out of 5

Posted by National Trust Scones at 05:56