It had to happen sometime I suppose. The scone blogger arrived at Hughenden near High Wycombe only to discover that there were NO SCONES.

That's not actually true. They had cheese scones. And I never said that this was a sweet scone-only blog. A correspondent from Nymans had already questioned me on my anti-savoury bias and I'd agreed to be more open-minded. But I won't lie; I was really disappointed.

It didn't help that a) it was raining and b) we'd got lost on the way, so relations were, let's say, a tad fraught before we even got to Hughenden. But I decided to change the habit of a lifetime and affect a cheery, worse-things-happen-at-sea! demeanour and so I plumped for the cheese scone: 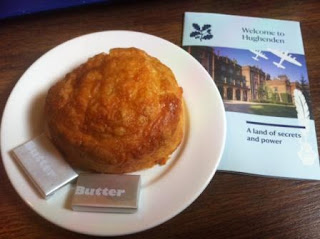 I've never eaten a cheese scone and so I have nothing to compare it to but it was OK - they warmed it up for me and it had a nice spongy texture, plus the tea was lovely. My accomplice forked his way miserably through a slice of Victoria sponge as if he was heading to the gallows but maybe he was just regretting his choice of girlfriend and her lack of map-reading skills.

ANYWAY. Things were not going well and then we went into the manor house itself and it was FANTASTIC. Hughenden is a real little delight of a place. There are so many National Trust properties that are lovely but you'd never want to live there in a million years - too big, too draughty, too forbidding. Hughenden - I'd move in tomorrow: 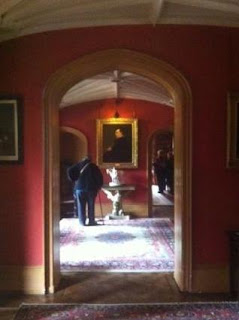 I wanted to visit Hughenden because it had been the home of Benjamin Disraeli. If you sent me on Mastermind, the one subject I would not want to face (along with anything to do with cricket, science, cooking, films, or the Kardashians) is British Prime Ministers. I couldn't even tell you who was Prime Minister when I was born (I just looked it up and it was Ted Heath).

1. Disraeli was born Jewish but his father converted to Christianity when Benjamin was 12. However, for his whole life and career he was caricatured as Jewish.

2. He married for money but then fell in love with his wife. He was known for spending way beyond his means so when he got the chance to marry a rich widow, Mary-Anne Wyndham Lewis, he took it. He subsequently went on to describe her as "the most cheerful and the most courageous woman I ever knew". Which was pretty fortunate for them both when you think about it.

3. Queen Victoria loved him. The more I read about Queen Victoria, the more she sounds like a really unappealing old curmudgeon. Anyway, at first she didn't like Dizzy and then she did and then she loved him until he died (mostly because he was so good at flattery it seems to me).

4. He was a Byron fan-boy. When I read this, I assumed that Byron was long dead but no - he was only 16 years older than our hero and they knew each other. As you can imagine, Byron wasn't much of a role model - basically what Disraeli learned from him was how to dress extravagantly and spend excessively.

BUT! The history of Hughenden doesn't end there. It is also famous for its contribution to WWII. It was commandeered by the Air Ministry in 1941 and it became the secret centre of map production, creating all of the maps that were used for night-time bombing raids in Germany.

BUT! What is really amazing is that nobody knew about Hughenden's role in WWII until 2004! Yes indeed, for almost 60 years the story was hidden, until a National Trust guide overhead a visitor telling his grandson about how he'd sat at a desk in front of a window in one of the rooms drawing maps. The story was then declassified and more people came forwards with tales, helping to create an exhibition that is fascinating in every way.

And I LOVE that about Hughenden. You have to remember that most properties hitch their wagons to a certain era - so at Hughenden it's the Victorian era when Disraeli lived there. But go downstairs and there's a 1940s sitting room, complete with radio and sewing machine on the sideboard. It was fascinating to suddenly see the house in a completely different timespan.

So, in conclusion, we loved Hughenden. I overheard the very lovely guide in the Entrance Hall telling someone that they decorate the place at Christmas in Victorian stylee - I hope I make it back there for that because it would be something pretty special. 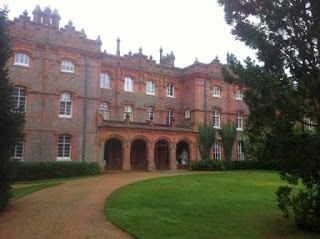