I went to Lyme Park in the Peak District on a solo mission today. My usual partner in cream decided watching the rugby was a more attractive proposition than eating scones (I know, I should sack him).

It has to be said that I usually make a point of not mentioning if the National Trust properties that I visit have appeared in any films or TV programmes. It just seems wrong; history, history, Tudors, Stuarts, history, history, owned by 85 generations of Boggingtons, history, history...oh and they filmed Bargain Hunt there once. It just feels wrong, so I don't mention it (and I know that sounds rich coming from someone who is basically going around judging places by their scones).

So I set off this morning promising myself that I wouldn't mention Jane Austen, Mr Darcy, or the fact that Lyme House stood in for Pemberley in the BBC adaptation of Pride & Prejudice, aka where Colin Firth walked out of a lake in a soggy shirt, causing a tidal swoon across the country.

And then I got there and saw this: 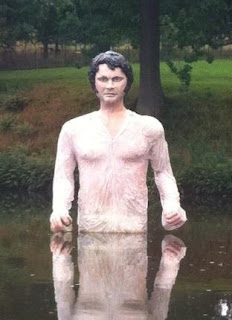 Yes, it's a giant Colin Firth standing in the lake. To give you an idea of the scale of it, here's another view: 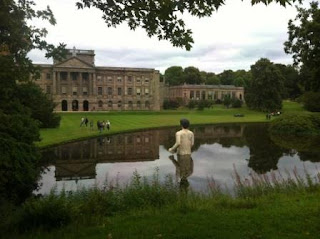 I can see why some people might not like it because it is, well, unavoidable. If you want to walk out a la Elizabeth Bennet and survey the gardens in all their natural wonder then you're scuppered. But it's a temporary fixture and it's MASSIVELY popular - it had a gaggle of people photographing it at all times when I was there (at one point I thought the man walking along in front of me was about to go down on one knee to his girlfriend and I developed a sudden desire to stare at the Dutch garden for 20 minutes so I wasn't there for any negative fall-out). I've read a few things recently about the 'Disneyfication' of the National Trust and it annoys me. In the parlance du jour, everybody's National Trust 'journey' has to start somewhere and if it's a woman dragging her other half to Lyme because she saw it on TV and fancies Colin Firth, what's wrong with that?

The Lyme Park scone
But onto more pressing matters, namely the scones. Readers, please be kind to this scone. It's not the prettiest I've reviewed but usually I pick my own scone - the restaurant at Lyme is table service and so this was chosen for me: 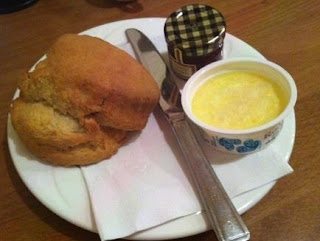 And I'm not knocking Tiptree jam (which is what usually appears in those little jars) but the jam at Lyme was different and absolutely DELICIOUS. I looked like a demented woman, scraping at every little last pip - it was just amazing. The scone itself was a tiny bit on the dry side for me but it was so big that one mouthful was a little dry, the next was chewy and lovely.

The staff at Lyme House itself should win awards for their friendliness. They really care about the property and if people are enjoying the experience. And I have to say that I struggled a bit with Lyme House. It's an incredible place - it was owned by the Legh family from 1398 to 1946 when it was handed over to the National Trust. I also love that, like kings and queens or the Pope, they all had the name Piers or Peter and would call themselves Sir Piers Legh IX etc. And like kings or the Pope, there were nice Piers and nasty Piers and they seemed to always be right there next to royalty, from the Battle of Agincourt right through to being the Queen Mum's equerry.

You get a map of the house and in every room there are books listing the artefacts and describing the portraits of Nell Gwyn or the tapestries but it just didn't come alive for me like at Ham House or Petworth.

And then, in the very last room, something genuinely magical happened. There was a short film being projected onto the wall that showed the final Legh boys to be brought up at Lyme making a home movie in the 1930s. They'd written a Sherlock Holmes story and had filmed it in various rooms in the house, getting family members involved. It was lovely. Even though I watched it thinking of my own family living in massive poverty in 1930s, it didn't matter - they were young boys, born during or after the Great War and about to go through WWII and into a world where the house they'd owned for 550 years had to be given up. It was incredibly poignant and brought the whole thing to life in a way that the tapestries and galleries had not.

So well done to the National Trust. If a massive statue of Mr Darcy plonked in a lake attracts more members that pay for the upkeep of beautiful buildings and allow people to think of lovely ideas like the video I saw today, then it's all good.