You know how Spiderman has a Spidey-sense? Well, I think that the scone blogger is developing a Sconey-sense, because I had absolutely no idea that there was a Sconefest at Brownsea Island yesterday and yet that was the fourth destination on my scone odyssey. 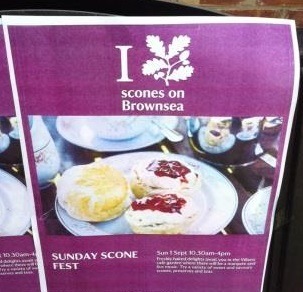 I could lie and say that I had chosen Brownsea Island for its wildlife and historical connections but really I just love a bargain and I especially love very good bargains from South West Trains as they drive me mad most of the time. Over the summer they’ve been offering a £15 return to pretty much anywhere – it usually costs £45 for me to get to Poole in Dorset by train, so £15 was a proper steal.

Of course, this resulted in the inevitable “sorry ladies and gentlemen, we’re stuck behind a slow-moving train” delay so by the time we got to Poole Quay and got on the boat that takes you across to Brownsea, I had serious concerns that it couldn’t possibly be worth the effort.

Well, I was wrong. Brownsea Island is one of the most beautiful places I have ever visited. GO. GO NOW.

But before you do, let’s talk scones. Sconefest meant that there was a big selection on offer: blueberry, plum, cheddar cheese and chive, goat’s cheese and caramelised onion…I should really have tried a bit of all of them but that might have ruined this important and highly scientific study.

Instead, to be consistent, I had the standard cream tea: plain scone, cream, jam and tea for £3.75. The other half had a fruit scone and then we shared an apple and cinnamon from the Sconefest counter.

It was scone perfection, people. SCONE PERFECTION. The plain one was slightly warm, lovely and chewy and I could have eaten four of them. The apple and cinnamon scone was similar in texture with subtle flavours – with a dab of cream, they were delicious. FIVE OUT OF FIVE ALL ROUND. 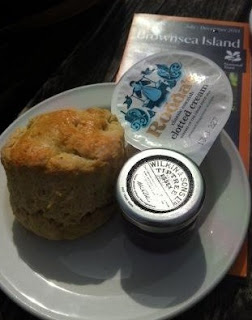 Of course, the view as we ate the scones may have contributed to the experience: 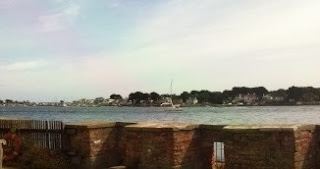 And that’s the thing about Brownsea  – it’s an absolute beaut of an island with a castle and a church and woodland and lovely views of the sea and Sandbanks and Harry Redknapp, well no I didn’t actually see Harry, but there was plenty else to marvel at. I thought I’d try and summarise Brownsea by mentioning four of its celebrity connections:

1. Lord Baden-Powell
Did you know that the very first ever scout camp was held on Brownsea Island in 1907, when Robert Baden-Powell and 20 boys pitched their tents there? I cannot imagine anything worse than camping and my career as a Brownie was undistinguished (I resigned in a fit of pique when they wouldn’t let me do my Jester badge – two weeks later the whole pack (or whatever we were called) did their bloody Jester badges) but I seriously cannot think of a lovelier place to camp. It has woodland, beaches, lagoons – everything. A real paradise. I can’t finish this paragraph without mentioning my friend Jane (not her real name) whose Brownie career was startlingly different to mine – she tragically lost her sister to cancer at a very young age and one of the ways she dealt with her grief was to unpick the badges off her sister’s Brownie tunic and sew them on her own. I often wonder what she’s doing now. Banking, probably.

2. Guglielmo Marconi
Yes indeed, the man known for inventing the radio was a frequent visitor to Brownsea when his friends, the van Raalte family, owned it as their country retreat. Apparently he conducted many of his experiments with wireless telegraphy at the Haven Hotel opposite Brownsea. It's quite strange to think that the man responsible for me having to listen to Magic FM every morning spent so much time in such a tranquil and peaceful place.

3. Squirrel Nutkin
I appreciate that Beatrix Potter probably didn’t get her inspiration from Brownsea but I can’t think of any other celebrity squirrels (was Tufty a squirrel?) There are 200 rare red squirrels on the island and we saw not a one of them. October is the best time to spot them, apparently. The nearest we came was a fridge magnet in the shop. We did see some baby peacocks though.

4. John Lewis
I know he’s not a person (was he a person?) but I thought it was fascinating that the John Lewis Partnership leases the castle on Brownsea. According to the man on the boat, they rent out 5 star accommodation at 2 star prices to their staff but there’s a 4 year waiting list. It’s worth waiting for, is all I can say to that. I can’t think of a nicer place to wake up in the morning. Where’s their recruitment page.

So I think I’ve made it fairly plain that Brownsea Island is awesome and you must go there. We were lucky with the weather – it started off quite cool but the island is a little sun trap so I came home looking like a lobster.

Email ThisBlogThis!Share to TwitterShare to FacebookShare to Pinterest
Labels: Dorset