I don't want to scare anybody but I do want to make clear that, should the National Trust decide to call it a day and hand all of their properties over to their most ardent fans, then I will be taking Arlington in North Devon. It's a doomsday scenario, I grant you, but it pays to be prepared. 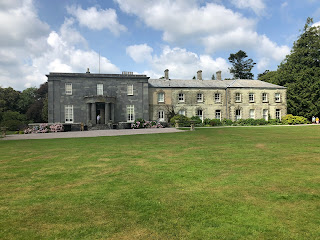 It's not the most beautiful house in the NT collection but it is located in a stunningly quiet, peaceful little corner of Devon with a lovely estate AND a museum full of carriages that I would be able to comandeer to drive me around the place.

But first here's a little history:


The house has beautiful rooms - I loved the library and the White Drawing Room:

But a definite highlight of Arlington is the National Trust Carriage Museum. I went to Charlecote a few years ago and saw a sign pointing towards a 'Carriage Display'. I'm ashamed to say that I tried to casually stand in front of the sign so my trusty sidekick wouldn't see it - I really didn't think carriages would be my thing and it sounded like something he'd definitely want to look at for 9 hours. But I was FASCINATED by them. I think my love of Jane Austen had taught me enough to pique my interest in phaetons and barouches and so on.

Arlington actually goes one better; it is home to the National Trust Carriage Musuem. It was created when the Marquess of Bute donated eight carriages in 1964 and the Trust needed somewhere to put them. Arlington was chosen as it had a stables that hadn't already been turned into a cafeteria/scone emporium.

The main event in the museum is the Speaker's State Carriage, but you're not allowed to take pictures of it. I borrowed this one from the NT website and I'll just hope that they don't sue me:

There are lots of other, less ostentatious carriages on display. I was a bit taken aback when the volunteer guide said "if you could refrain from actually getting in the carriages, that'd be great". It happens, apparently.

Anyway. The guide book says that over 325 styles of carriage were catalogued over the years, as designs changed quickly to suit different needs. Below is a Punch Carriage (so-called because its outline looks like Mr Punch). It was built for a doctor who would need to be able to jump in and out quickly, with a little desk for writing notes:

I found my favourite in a photograph. Who knew that you could entrust your infant child to the services of a goat? I thought they just ate things off your clothes line: 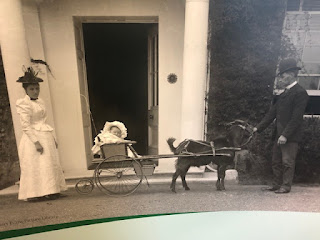 What you definitely do realise from looking around the Carriage Museum is that there was no such thing as a comfortable coach, especially back in the day of poor roads. I retreated back to my Ford Fiesta with the greatest of relief and appreciation, I can tell you.

The Arlington scone
Before I departed from my future home though, I called in to the team room for my scone. Arlington was the final stop on my Summer 2019 World Tour of North Devon National Trust Scones and it had a lot to live up to; Watersmeet and Dunster Castle had both delivered five star sconeage.

But deliver it did - it was a beauty of a scone; fresh, tasty and full of fruit. 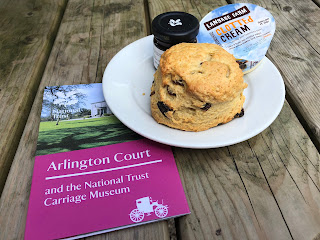 Arlington: 5 out of 5
Scone: 5 out of 5
My happiness at thought of buying a cat that can travel around the Arlington estate in a goat-powered carriage: 5 out of 5

Posted by National Trust Scones at 12:59