Kinver Edge and the Rock Houses

I genuinely thought, as I set off on my 185th scone mission, that the National Trust couldn't really surprise me anymore. Don't get me wrong; every property has its own scandalous story or architectural quirkiness that makes it unique, but there's definitely a pattern when you visit stately houses or moorland or archaelogical remains in a big field.

I probably should have known that Kinver Edge and the Rock Houses would be different. For one thing, it sounds more like a band than a National Trust property - 'GIVE IT UP GLASTONBURY! ALL THE WAY FROM KIDDERMINSTER, IT'S KINVER EDGE AND THE ROCK HOUSES!' - but I hadn't really given the place much thought. I'd seen some photos and couldn't grasp what I was actually looking at, so I think I just stopped thinking about it at all.

And then I got to Kinver Edge and realised that it's even weirder in real life than it is in the photos. On the one hand you have huge red sandstone cliff-faces that belong in the Grand Canyon or in films like The Good, The Bad and The Ugly. But instead of finding rattle snakes or Clint Eastwood shooting at you, there's a quaint little English cottage porchway sticking out as if you're walking down a street in Devon. You're more likely to meet Miss Marple than Lee Van Cleef.

It really is the strangest thing: 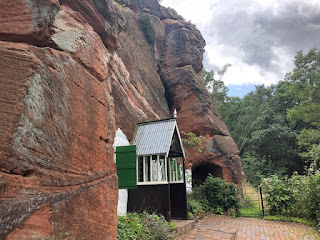 The volunteer guides were excellent, as is the guidebook. From them I managed to learn a bit of the history of the area: 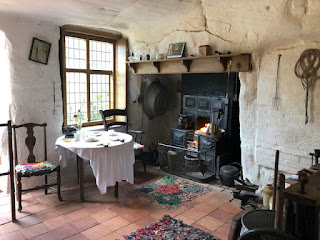 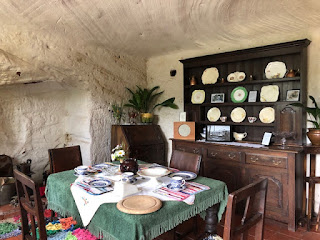 As I wandered around, wondering if I was in the Mojave Desert or 12 miles from Wolverhampton, I knew one thing for certain: the scone was going to be terrible. It just seemed so unlikely that they'd have any facilities for proper catering.

In fact, I was surprised that they even had any scones, but they did, and so I bought one and carried it into the tiny little tea garden where I was joined by about 3,000 enthusiastic wasps.

Ha, I thought, this looks a little bit more like a rock bun than a scone. How very apt. And then I took a bite and it was a brilliant scone. It was crisp and tasty, a conclusion that the 3,000 wasps agreed with. I was so happy that I cut off a chunk of scone, loaded it with jam, and let my waspy companions roll around gleefully in it. 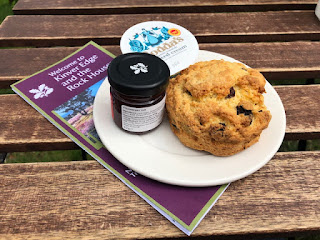 So there you have it. If you haven't seen Kinver Edge and the Rock Houses live you must go immediately.

Kinver Edge and the Rock Houses: 5 out of 5 (I'd give it more if I could)
Scone: 5 out of 5
Score for the jam from the entire wasp community of the West Midlands who joined me on today's visit: 5 out of 5

Other visits I have made in the West Midlands: Dudmaston, Moseley Old Hall, Wightwick Manor.

Posted by National Trust Scones at 11:24