If this National Trust Scone Blog project has taught me anything, it is to be less grumpy. This will come as surprising news to my family, and it will be disputed with good reason by the woman who scanned my NT pass in a property recently and let me walk all the way round to the house before I was sent all the way back to her again to get a house tour ticket. But it is true.

Dudmaston, near Bridgnorth in Shropshire, was a perfect example. Six years ago when I started this National Trust Scone Quest I expected the NT to be very formal, very quiet, with everyone focused on porcelain and architecture. 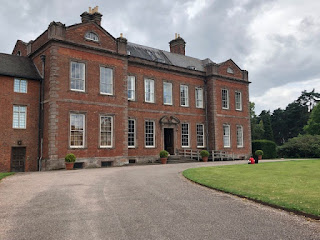 When I got to Dudmaston on a Monday afternoon, the first thing I saw were about 15 children sat on spinning wheels, all intently focused on their work. I wondered if I'd walked into the garden of a workhouse in 1893 or discovered a child slavery racket responsible for producing all those car rugs you see in National Trust shops.

But no. It was a wand workshop. Each kid was chiselling a piece of wood to make a wand. I haven't seen such focus in a long time.

And then in the grounds I saw a little boy run up to his big brother. "Kyle, they have goals!" No response was forthcoming. "Goals WITH NETS." That was enough for Kyle - both hightailed it for a game of football.

I know a lot of National Trust members will be unhappy with this but I love it. I love the fact that families can rely on the NT to provide space and activities during the summer holidays and that kids grow up thinking 'yay Dudmaston' rather than 'Dudmaston boring'. 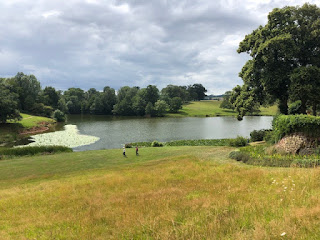 But I wasn't very interested in wands or footie, and thanks to the handy guide book I can share some history: 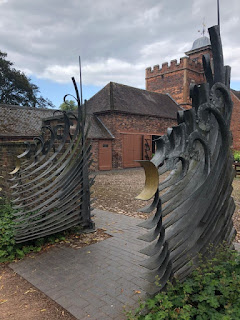 The Dudmaston scone
But let's move on to something that I definitely did have in common with all of the younger visitors: an interest in the cafeteria. I had already had a scone at Kinver Edge and I won't lie to you; being hungry can affect my perception of scone quality. If I'm starving, then a scone tends to taste better and I have to carry out a rigorous inspection of myself to ensure that all scones enjoy a level playing field.

Happily it didn't matter a jot at Dudmaston because the scone was indisputably fantastic. It was light, fresh, and fluffy and a very good size. The entire wasp community of the West Midlands had clearly followed me up the A458 from Kinver and was ready for part two of their jam fest. I didn't disappoint them and the old jam-pot-on-the-adjacent-table trick distracted them from bothering me (the adjacent table was empty by the way, just in case you were worried that I had sent the wasp brigade to bother a group of defenceless toddlers). 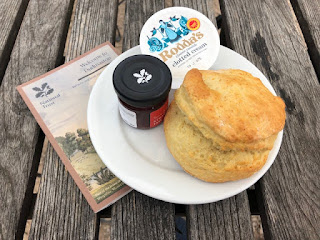 So there you have it - a lovely house with an interesting history, a top-notch scone, and goals WITH NETS.

Other visits I have made in the West Midlands: Kinver Edge, Moseley Old Hall, Wightwick Manor.

Posted by National Trust Scones at 22:00