In the 22 years since I graduated and joined the world of work, there have been something like 1,120 Fridays. There have been some very good Fridays - most of them involving at least one pub, it must be said - and some very sad Fridays and some please-God-can-it-just-be-the-weekend-already Fridays.

But I'd be willing to bet that the day I spent at Baggy Point near Croyde in North Devon would be up there in the Top 20 Fridays of my life.

It involved an early start. My world tour of North Devon National Trust scones was drawing to a close and I had a lot to fit in, so I headed to Croyde Beach to take in the morning air and hopefully find a cup of tea before I continued my nerve-jangling drive around the roads of the Devon coast.

I was immediately reminded that there are few nicer things in the world than a path leading to a beach. So simple yet so full of promise, whether you're four or forty-four or ninety-four. 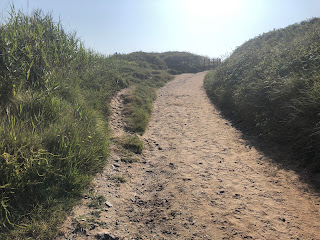 But this particular path led me through a campsite, which presented me with a problem. Friends, I am not a camper. I am renowned, although pretty much unique, among my acquaintances for my antipathy towards camping, but as I stood at the entrance to that campsite I knew the moment of truth had arrived. "OK," I thought. "This is where I realise I've been wrong for 30 years and I'm going to immediately ring everyone up and beg them to lend me a tent and take me to the Pooh Cottage Holiday Park in Budleigh Salterton."

I needn't have worried; the sight of two lads trying to pack their belongings into a car with nothing but a very limited amount of common sense and a very liberal use of the F-word left me in no doubt that I had made the right call all along. Thanks boys.

Anyway - I continued down onto the beach, which was empty apart from some surfers and one family whose kids had clearly decided that 7am was the correct time to start a day by the sea. It was just glorious: 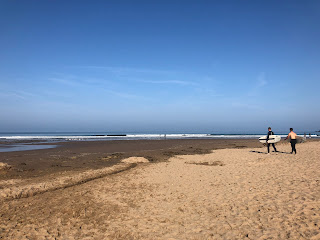 Admittedly, the weather was on my side but even on a cloudy windy day I'd have loved it; I sat there for over an hour listening to the sea and the birds. 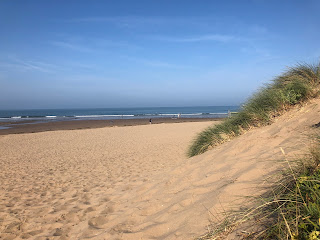 But time was ticking and so I headed up to Baggy Point, the headland above Croyde. It was a gorgeous walk - hardly anyone else was around and all the cares of the world felt like they belonged far, far away. 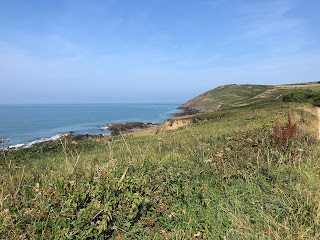 I eventually returned to Croyde and to the Sandleigh Tea Room, which was recently taken over by the National Trust, for my Baggy Point scone. It was risky - I can't imagine they get many people requesting a cream tea at 10.30am - but time was running short.

The scone looked fantastic but it tasted soggy, in that way that scones tend to taste soggy after they've been kept in an air-tight container. It was a shame but I suppose you can't be good at everything. 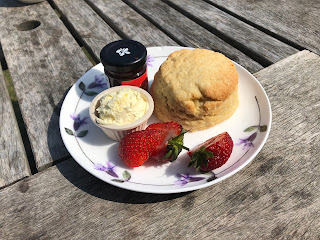 Regardless of that, I cannot recommend Croyde and Baggy Point enough. Go early to the beach and at a reasonable afternoon hour for the scone.

Posted by National Trust Scones at 06:29