If yesterday's trip to Stackpole was a highpoint in the annals of the National Trust Scone Odyssey - my first post-lockdown scone, 199 days in the waiting - then today was...well, let's just say it wasn't a highpoint. Anything that involves sheeting rain, no scone, and an AA man fixing your hired Toyota Aygo in a car park is unlikely to be a highpoint of anything.

But! Our motto here in NT Sconeworld is NEVER MIND and, anyway, I didn't actually need to visit Colby Woodland Garden in Pembrokeshire at all - it was a bonus. The Bothy tearoom is tenanted and I took the decision ages ago that tenanted cafes would not be a mandatory part of this quest. But I was in the area and I'd heard great things about the place so I decided to drop in. 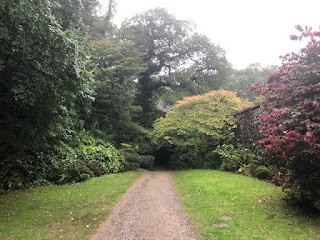 The first mistake I made was to save the scone until after my walk. I never, ever do this - it's Rule 1 in the Scone Blogger Handbook: Eat Scone As Soon As Possible. The second mistake I made - and this is the one that I believe angered the Scone Gods - was I bought a cup of tea and a piece of apple cake to sustain me. WHY? Why did I break with years of best practice? I don't even like apple cake.

It all went downhill from there. I trudged off into the torrential rain, noting the signs about keeping two metres apart. I needn't have worried; there was hardly anyone else there. 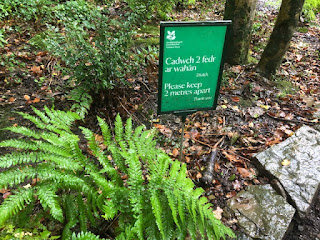 There were other signs advising that a one-way system was in place. This troubled me immediately. I had no idea how long the woodland walk was - what if it stretched for 20 miles and I was stuck on it for days with no way of legally turning back? It turned out I was right to be worried; I stuck to it so diligently that I soon found myself walking out of the estate altogether and down to the nearby seashore at Amroth.

There had been no phone signal on the Colby estate and as I walked down into the village my phone suddenly burst into life with voicemails and texts. I sat in the bus shelter while I spoke to the car hire company - the light that kept flashing on was indeed potentially a problem so the AA were on their way. I beetled back to the car park and spent the next 20 minutes sorting out tyre pressure.
I could, and should, have gone back for my scone but I was soaking wet and extremely miserable. I'm not giving up though! I will claim my bonus Colby scone before the week is out!

True to my word, I made it back to Colby Woodland Garden on my final day in Pembrokeshire. The rain was (just about) holding off and I was 100% clear on what was needed: I went straight into the Bothy tearoom and ordered my scone.
Things didn't bode too well: a microwave was involved and when I tried to cut the scone it disintegrated into about 12 pieces. However, I have stopped worrying about microwaves ever since my niece asked for her scone to be heated up at Croft Castle. It must be very tiring working in a National Trust cafeteria.
But in fact the scone was delicious. Just the right amount of fruit, sweet and tasty, it was well worth the return trip. 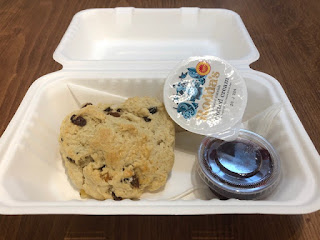 Colby Woodland Garden: 4 out of 5
Scone: 4.5 out of 5 (a bit crumbly but very tasty)
Worthwhileness of the return trip: 5 out of 5
Posted by National Trust Scones at 11:56 No comments:

2020 was supposed to be the final glorious year of the National Trust Scone Odyssey. I'd visited 208 properties over the previous six and a half years, with 30 NT cafes still to go. Seven years felt like a suitably noble amount of time to be labouring on a quest. And even though concerned viewers were asking "Are you sure you can do this? Maybe give yourself a bit longer?" I was very confident - I'd completed 26 visits in one single barnstorming month in 2019, so I knew victory was within my reach.

The year started well - too well - with a successful outing to Lavenham Guildhall in January. By then, news of a virus coming out of China was starting to build. When I suddenly fell ill in late February, with a high temperature and a bad cough, my boss surprised me by suggesting I ring 111. "Have you been to China recently?" they asked. "I haven't been to China at all?" I replied. "Then you don't need a test." I recovered and a few weeks later made it to Wentworth Castle Gardens just before the lockdown shutters descended.

You can read the 'What We Did During The Lockdown' blog post here - in brief, we acquitted ourselves extremely well in NT Sconeworld.

Nonetheless, June 12th is marked clearly in my memory; it was the day that the first real National Trust scone was spotted in the wild (at Mottisfont). NT scones were BACK.

But although they were BACK, things had changed. If any of us had been handed a National Trust scone in a cardboard box eight months ago, there would have been uproar. "In a BOX??" we'd have boomed, like Lady Bracknell and her handbag. And yet here we were: sightings of scones in takeaway cardboard and cellophane wrappers were being greeted with mass rejoicing.

Unfortunately, I was too busy at work to go and find any NT scones for myself. So I made the decision that, when the time came, I would go all out. I picked a property that was furthest away; 240 miles away in fact, in Stackpole in Pembrokeshire.

Was I rewarded for my efforts? YES I WAS. I bought my scone from the Boathouse Cafe at Stackpole Quay and carried it reverentially outside. I knew with one glance it was going to be good. It was also warm, as I'd eagerly turned up 10 minutes after the place opened. 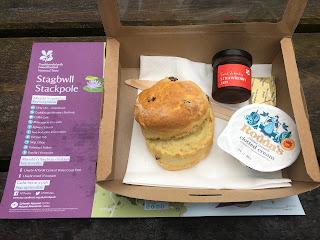 It was a divine scone. It was also a brave scone - it was dangerously unsweet, relying on the fruit and the jam to provide the sugar. But it worked. It was unusual, delicious and very memorable.

It started raining but nothing short of an earthquake was parting me from a scone I'd waited 199 days for. I defiantly put my hood up and kept going. A woman nearby said "well, it's not SUPPOSED to be raining" and everyone else stayed put too. They're made of stern stuff in West Wales.

And that's where my first visit ended. I'd decided to walk to Stackpole  - not the full 240 miles, I hasten to add, just 2.5 miles from Freshwater East where I was staying. Regular viewers will know what's coming; the Scone Blogger's boots were made for walking...in London. I soon found myself slipping down muddy gradients in a pair of completely unsuitable trainers as I huffed and puffed along the Pembrokeshire Coastal Walk. (Other tales of walking disaster are available at Lydford Gorge, Longshaw, and Saltram.) 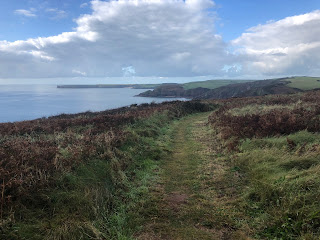 This meant that when I reached Stackpole I had absolutely no interest in going any further as I knew I had to trek the 2.5 miles back.
Luckily I was staying in Pembrokeshire for the week, so a couple of days later I went back. The Stackpole Estate is very large so you either need to park up and walk for the day or be prepared to drive to a few different spots.
Here are the highlights:

Here it is, folks - a picture of what the world would look like without the National Trust: 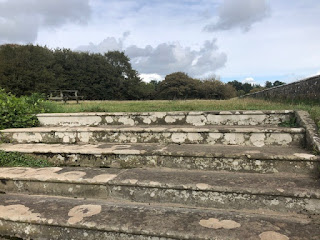 I'm vastly oversimplifying things here. However, in a month when the Trust has come under huge amounts of criticism, it felt very apposite that I'd get the chance to walk up a grand set of steps to see...absolutely nothing. Stackpole Court was pulled down in 1963. Built in 1735, it had fallen into disrepair after the Second World War, like so many stately homes, and was demolished, like 1200 others. You can read about other lost houses at Clumber Park and Fell Foot.

Without the Trust, a lot of other houses, buildings and estates would have gone the same way. And while everyone should have the right to raise concerns if they don't agree with how things are being run at the NT, cancelling your membership will achieve two things: a) you don't get to go to National Trust properties anymore and b) the Trust has less money, so is even less likely to do the things that you think are important. So on balance, I'm not sure it achieves very much at all.

The lakes were built between 1780 and 1860 as a focal point of the estate. Today they're known better as Bosherton Lilyponds. I mean this as a compliment but the area felt more like a swamp in the Florida Everglades than a lake on a National Trust estate in Wales. I genuinely expected to see a gator sunning itself among the greenery. A very beautiful spot. 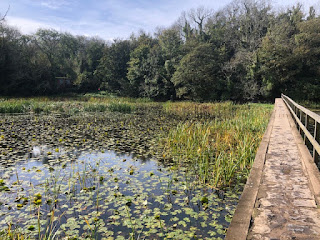 Beautiful as they were, though, my visit to the the lilyponds was accompanied by a very incongruous soundtrack of machine guns firing away in the distance - I assume it's from the Castlemartin Training Area owned by the Ministry of Defence.

There are three beaches on the estate - Barafundle Bay, Broadhaven South and Freshwater West. I'd seen a sign for Barafundle Beach at the cafe on my first jaunt, although when I looked it up on Google Maps it was billed rather rudely as a "modest bay". But I couldn't resist going back to the Boathouse Cafe again, so I decided to pick up a scone and a cup of tea and wander off over the clifftop to see what it was like.
My advice to you: ignore Google Maps. Barafundle is a stunning little spot. I made my way down from the clifftop and ate my scone by the sea. I risked everything to take the picture below, by the way; I could see a dog doing the maths to work out if he could run up to me, snatch the scone, and get enough purchase on the sand to make his getaway. He wisely decided against it. 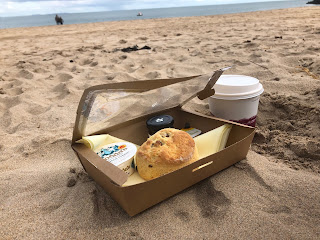