What would you do if you received a call one day saying that Alan Sugar had died leaving everything to you in his will? All of his businesses (even that plastic surgery one) and a huge sprawling estate with a house on it? The only drawback being that the estate is in North Wales and you live miles away and have never even been to North Wales?

This is sort of what happened to a man called George Hay Dawkins in 1808. His distant cousin, Richard Pennant, was the owner of sugar plantations in Jamaica as well as slate quarries in Wales. When he died childless, he left everything to George.

I don't know what you would do - I don't even know what I would do - but George decided to spend 20 years and an estimated £100 million in today's money building Penrhyn Castle: 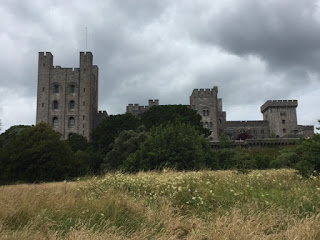 Yes, this ancient-looking fortress might look a thousand years old but it was actually built less than 200 years ago. George didn't want to build a Georgian house - with its location high on a hill near to Caernarfon Castle and Conwy Castle, he wanted something spectacular. 20 years and a king's ransom later, he got it.

But if you think the exterior is impressive, you should see the inside. It is quite literally STUPENDOUS and probably the most amazing interior I have ever seen at the NT.

And I wasn't alone in thinking this. The Scone Sidekick is a builder and when I am wandering around NT properties admiring scones and cats and pictures of scandalous adulterers, he is looking at door hinges and examining flooring. At the end of today's visit he said simply "I am speechless". Which says it all.

This is the Library - the elaborate ceilings and carved wooden door and window frames give you a tiny bit of insight into what the place is like - but you really have to see it to believe it: 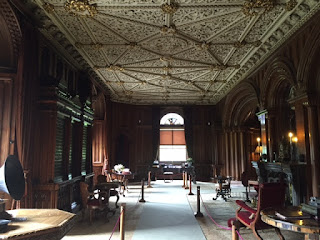 Let's go back and take in a bit of early Penrhyn history:

When Richard died, George decided to replace the house that Richard had created and work started on his 'fairy castle'. It was built using local oak, slate, marble and a workforce that had been laid off from the quarries during difficult times for the industry.

It is very sobering to look at Penrhyn knowing that it was built on the profits of slavery - our friend George opposed the electoral reform that led to the emancipation of slaves in 1833, and he was paid almost £15,000 for the 764 slaves that were freed from his estates.

The views from the castle are also spectacular, taking in the mountains of Snowdonia and the Menai Strait: 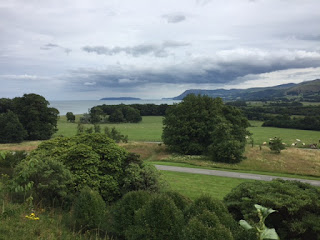 The Penrhyn scone
Let's move on to the scones. I'm not going to go into detail about the whole saga, because things go wrong for all of us sometimes and the poor service was probably just unfortunate.

However, the fact remains that the scone tasted stale, I took it back, and the staff refused to accept it - they insisted they'd been baked that morning. I was really disappointed about this, because:


But the staff didn't know any of that - presumably they just thought that I was making it up or being difficult or trying to get something for nothing. I don't know. We were just left with two scones that we couldn't eat. 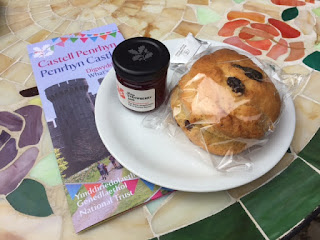 Anyway - the beauty of this scone project is that if the scones don't work out, the property usually makes up for it and that's exactly what happened today. I can't recommend Penrhyn Castle highly enough - it's stupendous and well worth a visit.

Posted by National Trust Scones at 12:03