Here's a story for you. When I was 6 or 7, someone bought me a book from The Garden Gang series. You may remember these books if you came of reading age in the early 1980s - Roger Radish and Simon Swede etc.

Anyway, when I discovered that the author, Jayne Fisher, was 9 YEARS OLD I nearly had a cat. I decided right then and there that I would beat her and have my name on a book EVEN YOUNGER. I may even have started writing that very afternoon - no word of a lie, my opus was called The Coin Gang and starred a 10p called Terry and a 5p whose name I mercifully can't remember. Freddy probably.

Anyway. I probably don't need to tell you that I did not become the youngest ever author of a Ladybird book and the world remains untroubled by the Coin Gang.

BUT!!!!!!! Never give up on your dreams, kids, because 36 years later, I am about to contribute to an actual book! Yes, the National Trust will be publishing a tome called Around England in 50 Scones, featuring scone recipes from National Trust chefs around the country with some commentary from yours truly!

And as if this wasn't exciting enough, I also recently got to meet Clive Goudercourt, the Development Chef at the NT. For some reason I always want to call him Sir Clive Goudercourt - I think he has the perfect name for a knighthood, plus as King of the Scones at the NT a summons to the palace can only be a matter of time, but for now I better stick with 'Clive'.

Anyway, Clive showed me how to bake fruit scones and cheese scones in the lovely kitchens at Grey's Court. A massive thank you to Clive, Tessa, Emily and everyone else that made that possible - it was fantastic and I got answers to a gazillion questions about scones and the NT.

Here are a couple of pictures - I'm boringly and probably unnecessarily remaining incognito for now, just in case a chef spots me and refuses to let me in to his/her tearoom when I still have 120 properties to visit.

I'll keep you posted on when the book is out - it'll be sometime in the Spring!

NB: It's out! You can find it in most NT shops, on the NT website, or on Amazon! 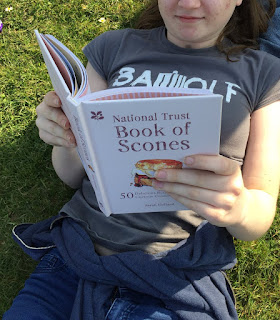 Posted by National Trust Scones at 12:16