Powis Castle is in Wales. It's only just in Wales but it was built by Gruffudd ap Gwenwynwyn so I think we can safely say that it's Welsh.

When I first saw a picture of Powis Castle, I was convinced that it was one of those mock medieval castles built by a bonkers millionaire in 1898. It looks so new. But it isn't. Here's some history:

Powis Castle is fantastic, because it's a medieval castle that is still habitable. Having seen Powis, I now have a much better idea of how Bodiam Castle, built in the 1300s, or Corfe Castle, which is even older, might look if history had worked out differently.

But unfortunately, I can't show you any photos of the astounding rooms. And this is where we get to a very rare burst of complaint from me.

First, a disclaimer. I read Bill Bryson's new book this week, The Road to Little Dribbling: More Notes From a Small Island. In it, he is quite critical of the Trust. I found myself defending them in my head with the sophisticated argument that I always use for NT haterz, which involves me holding my hand up and saying "Is the National Trust a good thing or a bad thing?" and when they start spluttering about how it is generally a good thing, I declare "case closed" and move the conversation on, usually to did they see the failed bake on Extra Slice last week, the one that was supposed to be a squirrel, because I DIED laughing at it.

But maybe I was unknowingly influenced by Mr B, because for the first time today I found myself absolutely infuriated by the National Trust.

1. The Earl of Powis doesn't allow photos - I was taking a photo on my phone when a guide rushed across the room and said "no photographs!" I'm no Annie Leibovitz but I was surprisingly dismayed by this - maybe it was the 6.30am start and the four hours I had just spent on trains getting to Powis - so I asked why not. "The Earl of Powis doesn't allow it". I wanted to ask her why he would put up with the public traipsing around the place, which is surely a far greater inconvenience, but not allow a few unflashed photos, but she seemed a bit flustered and I knew the answer anyway (the £13.40 entrance fee x the 126,000 annual visitors) so I left it.

2.  The Clive Museum - I had read about the Clive Museum in the guidebook before my trip and I was perturbed by it, to be honest. Regular readers will not be surprised to hear that my school didn't bother with the British Empire - in fact, and this is no word of a lie, the only education I got about the Empire was when I was a 20 year-old teaching assistant in Germany and the 11 year-olds there knew all about it.

BUT, even with my limited education, I sort of assumed that we didn't really celebrate the whole Raj thing? At one point the guidebook tells how Robert Clive (father of Edward, the 1st Earl of Powis, 3rd creation) served in India where "there was considerable local unrest and Clive was authorised by the British government to defeat local uprisings; this he did successfully, amassing a personal fortune at the same time." Shouldn't there be some sort of coda to this, just reminding us what "successful" actually meant to the local population?

I later spoke to my wise Sconecounsel, Pete Duxon, who gently reminded me that many NT houses have either been built or extended or furnished on the proceeds of the East India Company, or slavery. And he's absolutely right - Robert Clive owned Claremont for a while, and Osterley Park was built thanks to the Child family's involvement in the EIC, to name but two.

But I still felt better after I read this article by historian William Dalrymple about the Clive Museum, which explains that there are more Mughal artefacts on display at Powis than at the National Museum in Delhi.

3. Tipu Sultan's tent - as you can probably gather, I didn't like the Clive Museum and its lack of balanced information, but while I was there I saw one of the laziest, most arrogant things I have ever seen at the Trust. I wandered into a little annex to find some glass panels facing what looked like a building site, with a woman's dress plonked in it. I looked closer and realised that this is where they usually keep Tipu Sultan's state tent. Tipu had been the ruler of Mysore until our friend Robert Clive helped defeat him at the Battle of Seringapatam in 1799 and "many of his possessions were acquired as the spoils of war" as the guidebook puts it. Interestingly, this event is known as the Siege of Seringapatam everywhere else.

Anyway, the tent has been taken to the V&A. Nothing wrong with that. But if you go to Powis to see it, all you will find is a building site and a really insulting piece of A4 stuck to the window showing pictures of it being removed. What use is that? Why not have a large picture of it so people can still see it, having paid their £13.40?

I was a bit dejected by all of this, because Powis was the 100th stop on this National Trust Scone Odyssey and I badly wanted to have an informative and enjoyable day, like so many of the other 99 days that I've had.

The Powis Castle scone
But the very good news was that they had scones and the tea room was lovely. My scone looked and tasted a little bit dry but I was delighted to see it: 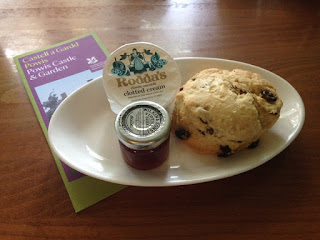 I'll finish with the highlight of my day; the walk from Welshpool station to the castle. The National Trust really should treat itself to a new website - if you look on the Directions page to Powis it says "Welshpool, 1¼ miles on footpath" which could mean anything really. I love this National Trust Scone Odyssey more than is probably healthy, but I would prefer not to get murdered doing it. There was one trip where I 100% thought I was going to get mugged on my way back to the station. But then there was Lyme Park and there was Flatford, where the walks from the station were absolutely fantastic and I wouldn't have missed them for all the cars in the world.

Anyway, my point is that the Trust should share this information a bit more. If the walk from the station is difficult - there's no path to Baddesley Clinton for example - then just tell us. If the walk is a little challenging but utterly worth it - Lyme Park - tell us that too. Or let us tell each other.

Welshpool is a lovely little town. One of my life rules is never to look in estate agent windows when I venture outside London and today I accidentally broke that rule. I've decided to move to Welshpool next week. I'm not going to tell the Scone Sidekick - I'll just stick a piece of A4 on the fridge showing pictures of me packing my stuff.

Lastly I want to thank Pete Duxon for his insights today, especially about the National Trust and photography. He tells me that the NT used to be paranoid about people taking photographs but they relaxed their rules in 2010 so that most places now allow photography without flash - he explains it here. It made me feel a little less annoyed (but not much).

Powis Castle (without the photography rule and the unbalanced information in the Clive Museum): 5 out of 5
Scones: 4 out of 5
Welshpool and the walk to the castle: 5 out of 5