I got an email recently asking me why there are so few scone missions to the South West on this blog. 'Yes,' I asked myself, 'why have there been so few visits to the South West? This is bad. I must put this right.'

Well, now I can tell you why there are so few visits to the South West: BECAUSE IT TAKES FOREVER TO GET THERE. I could have flown to Iran in the time it took me to reach Bodmin today. IRAN. Although a flight to Iran would not have taken me across the River Tamar and through some of the loveliest countryside in the UK. And it is also highly unlikely that I would find any scones in Iran.

ANYWAY. Any sane person would have booked a holiday to Cornwall and done a tour of several National Trust properties, eating six cream teas a day, and spending peaceful evenings listening to their arteries furring up.

Me? I went to Cornwall FOR THE DAY. But it had to be done - this blog has been going for over two years now and it's embarrassing to talk about scones without mentioning Cornwall. Plus, this is a blog about National Trust scones - sanity went out of the window a long time ago.

I chose Lanhydrock because it's possible to walk there from Bodmin Parkway station - it's a lovely walk too, I highly recommend it. 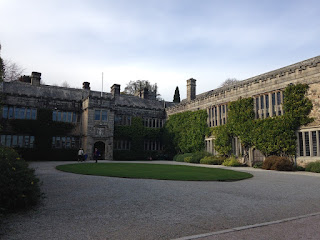 The first thing you need to know about Lanhydrock is that it's deceptively HUGE. This is the floorplan for the ground floor alone - there are two other floors on top of this. 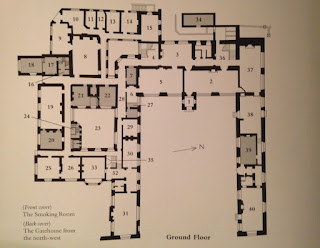 Here's a quick bit of history:

It might be big, but the house was surprisingly homely. It's furnished in the Victorian style, with lots of comfortable furniture and William Morris wallpaper. You can find lots of excellent photos on Pete Duxon's blog but I'll share this picture of the Boudoir, one of my favourite rooms. Let's be upfront about this, though - lovely as the overmantel and silver-plated muffin warmer are, it was probably the pile of scones that caught my eye: 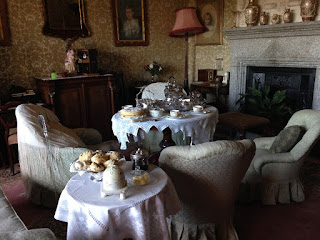 The Lanhydrock scone
Speaking of which - I think most people would agree that Devon and Cornwall are like the Arsenal and Tottenham of the scone world; they each have their own particular way of doing things and it's probably best to keep their supporters apart, especially if they've been drinking.

I've had two Devon scone missions so far - Killerton and A La Ronde - so it was up to Lanhydrock to west-coast-represent as the first Cornish mission of this National Trust Scone Odyssey. 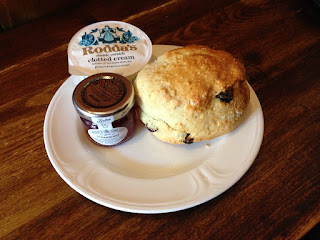 Readers, the scone was sublime. It was fresh and soft and tasty and I had snaffled it down in about two minutes. Lanhydrock also achieved something that none of the other properties have managed; they served the Rodda's cream at the perfect temperature. It was soft and a bit gloopy, not hard like it normally is.

So today might have involved an insanely long trip, but it was one of those perfect days that reminds me why I pursue this crazy project. A lovely autumn day, a perfect scone, a fantastic piece of history, and the chance to see a bit more of the country that I live in. I leave you with this shot of the River Tamar taken through the train window. 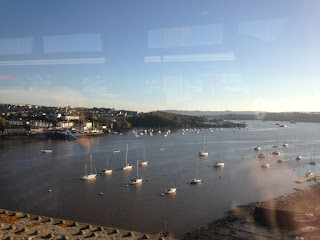