I am often asked the question "Scone Blogger, what inspires you to visit one National Trust property over another? Why a flour mill in Hebden Bridge over a dovecote near Biggleswade?" The answer is that there are many factors. I obviously look for scone potential. I like a dollop of historical scandal. A priest hole is always a bonus, as is a cat.

But when it comes to Plas Newydd on Anglesey, I had one reason and one reason alone for wanting to visit. Here it is: 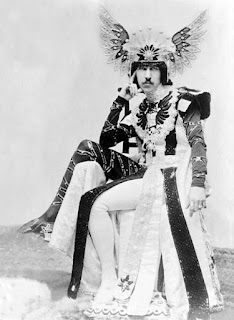 This, my friends, is a picture of Henry Cyril Paget, the 5th Marquess of Anglesey. You're probably shaking your head right now, thinking "that Freddie Mercury has a lot to answer for" but Henry Cyril DIED IN 1905! This picture was taken before 1905! My mind was blown.

But there's a lot more to Plas Newydd than Henry Cyril and his prediction of glam rock a full 70 years before it happened. Let's start at the very beginning: 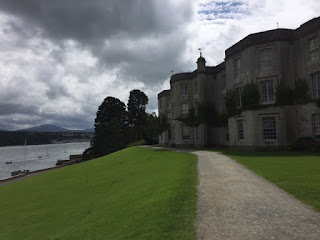 1. It's near a village called Llanfairpwllgwyngyll
Llanfairpwllgwyngyll has the longest single word place name in Europe, and the second longest in the world, apparently. I'm so glad that this is a written project AND that copy and paste exists.

2. Plas Newydd has a 5000 year-old burial place!
A long, long, long, long time ago, someone took the trouble to push five big boulders together to create a burial chamber (or cromlech) for a Neolithic chieftain - and it's still there today! Anglesey was a stronghold of the Celtic Ordovices tribe and its Druid leaders apparently - the Romans referred to Anglesey as Mona but failed to conquer it until 79AD, when they massacred everyone. 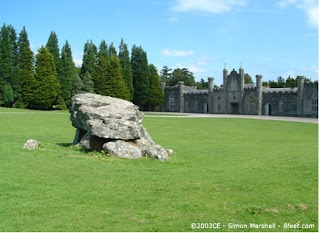 4. Then came the Pagets!
In 1737, Sir Nicholas Bayly married Caroline Paget. Her great-great-great-great grandad, William, had been made 1st Baron Paget following a successful career in the courts of Henry VIII and Edward I. When the 8th Baron Paget died, Caroline and Nicholas's son Henry was next in line, so he changed his name and took the Paget title to Plas Newydd.

5. Henry built a new Plas Newydd!
Henry rebuilt Plas Newydd in a hybrid Neo-classical-Gothick style, which is the house we see today.

6. 'One Leg' Henry delivers the scandal!
Henry's son, also Henry, was a very interesting character. He made a name for himself through his military escapades during the Napoleonic Wars, before scandalising society by leaving his wife and eloping with the Duke of Wellington's sister-in-law.

Henry and the Duke were presumably friends again by 1815 when they fought together at Waterloo. The guide book describes the moment Henry lost his leg; "By God, sir, I've lost my leg!" he is claimed to have said to Wellington, who replied "By God, sir, so you have!" Henry then had what was left of his leg amputated with no anaesthetic. He was made 1st Marquess of Anglesey for his efforts and his prosthetic leg is on display in the house.

7. Then came Henry Cyril!
Henry 'One Leg' actually did very little to Plas Newydd, and nor did his son or eldest grandson. His second grandson, the 5th Marquess, was the Henry Cyril mentioned above. There was always gossip about whether his real father was actually a French actor, and Henry's love of acting and jewellery did little to dispel those rumours.

He built a theatre at Plas Newydd by converting the chapel into the 'Gaiety Theatre'. The first production was Aladdin, in which he had a starring role. He also did his solo Butterfly Dance, after which he handed out photographs of himself to a baffled audience.

But it all ended badly, with debts of £544,000 and bankruptcy in 1904, followed by his untimely death aged 30 in a hotel in Monte Carlo a year later. Poor old Henry Cyril - they even sold his pet dogs, complete with their little silk jackets embroidered with his coat of arms. Where did it all go wrong.

8. Rex Whistler did the dining room mural!
The 6th Marquess was Henry's cousin Charles. He sorted out the debts and turned Plas Newydd into a comfortable country house - many of the rooms are presented as he and his wife, Marjorie, had them, with 1930s style bathrooms and bedrooms.

Charles and Marje were also great friends and supporters of Rex Whistler, and he painted an enormous mural for their dining room. It takes a few liberties with reality - he painted the mountains of Snowdonia behind a harbour scene featuring a Venetian gondola and some baroque buildings he had seen in Austria - but what's wrong with that? He put himself in it too, pushing a broom. 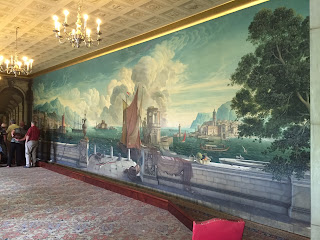 9. The NT took charge in 1976!
Lady Marjorie must have been one very relieved woman when she gave birth to twins in 1922 and one of them was a boy - she'd already had four girls. In 1976, however, the 7th Marquess gave Plas Newydd to the National Trust, although he continued to live there until he died.

10. The views are stunning!
The house is in the most fantastic location - overlooking the Menai Straits and the Menai Bridge (as you can see below) while also facing the mountains of Snowdonia. It's a stunning spot and I highly recommend you spend a day there. 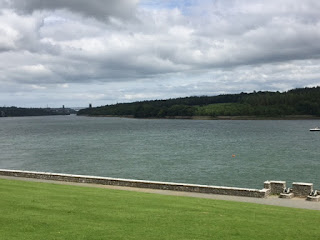 The Plas Newydd scone
But let's move on to the scones. I had already had a very disappointing scone experience by the time I got to Plas Newydd and so my expectations were low.

We did make the same mistake of going into the first tea room that we saw - there's another one nearer to the house - but this time it didn't matter at all; the scone was absolutely delicious. It was fresh as anything, light but substantial, and very tasty. 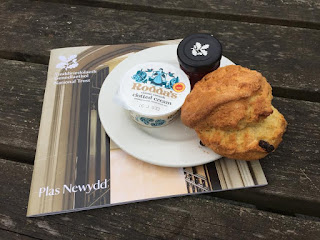 But let's end with another picture of Henry Cyril (or Toppy as he was known to his chums). What a legend. 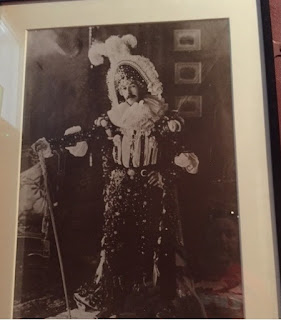 Posted by National Trust Scones at 14:06