Lamb House in Rye has been the home of many authors over the years, including Henry James, E.F. Benson, and Rumer Godden.

I knew, without even looking, what was going to happen next: I would be 99.9% sure that I had read many novels by Henry James but I would discover that I hadn't read any of them (tick); I wouldn't know any of E.F. Benson's works at all (tick); and Rumer Godden would have written some obscure children's story that only I and 0.01% of the population remembered, which I would get really excited about, ignoring all her other more important works (tick, tick, and tick).

But before we get to the literary history, let's talk about Lamb House itself:

1. It's in Rye and Rye is fantastic
I had never been to Rye in Sussex and I highly recommend it. It's a lovely place.


2. It was built by James Lamb
Lamb was a wine merchant who was greatly respected in the town and served as mayor thirteen times. He built Lamb House in 1723 in smart Georgian style.

3. It once provided shelter to George I
In 1726, a storm drove George I's ship onto nearby Camber Sands and he was stranded in the town. Lamb House was the smartest residence and so James offered the king his bed. This was slightly inconvenient for Martha Lamb, who was very pregnant. In fact, she was so pregnant she gave birth that night - the child was baptised two days later with the name George, the king stood as godfather and gave the baby a silver bowl and 100 guineas as a christening present.


4. Henry James first saw Lamb House in a painting
The house was sold to a banker in 1864 but it wasn't until 1897 that Henry James moved in, when he was 55. He had first seen a watercolour of Lamb House's Garden Room (a separate building that James Lamb had constructed next to the house) in a friend's home and went to visit the real thing the next summer. The house became available and he moved in.

4. Henry James loved the place
He lived at Lamb House from May to October every year, sometimes staying longer, before decamping to his rooms at the Reform Club in the winter. He wrote every day, using the Garden Room for his writing in summer and then the Green Room in winter:

Henry James wrote many of his best works at Lamb House, including The Wings of the Dove (1902), The Ambassadors (1903), and The Golden Bowl (1904). He also entertained many friends at the house, including HG Wells, Edith Wharton, and Rudyard Kipling who lived nearby at Batemans.

5. E.F. Benson immortalised Lamb House in his books
Henry James never married, so his nephew inherited the house in 1916. E.F. Benson, a friend of James, took on the lease in 1919. He wrote 70-odd books but his most famous works are the six Mapp and Lucia novels, which were made into a TV series. Lamb House is actually in the books - renamed as Mallards - as is Rye itself, renamed as Tilling.

6. Rumer Godden
Rumer Godden lived at Lamb House from 1968 to 1973, by which time it had been given to the National Trust. She wrote a lot of books, including Black Narcissus about some nuns losing the plot in the Himalayas, which was made into a film.

BUT - and I'm truly sorry about this, Rumer - I only recognised her name from a very bizarre kids' TV show called Tottie: The Story of a Doll's House. It was very weird and featured a storyline about a horrible china doll murdering another flammable doll by setting fire to the house so she melted.


The Lamb House scone
Anyway, enough about melting dolls. What about the scones?

I had taken my sister-in-law and niece along on this scone mission, expecting the usual response when I invite guests; slight bafflement at the whole project mixed with huge enthusiasm for the idea of eating scones.

But no. They were brutal in their criticism. They didn't understand why the cream was served in plastic tubs (huh?) and they straight away sussed that the scones weren't home made.

I explained the situation: sometimes NT properties don't have a proper kitchen and so you do come across the mass-produced scone seen below (it always reminds me of someone who has spent 2 hours a day on a sunbed for 20 years). My hopes were very low but actually it didn't taste too bad. The two Craig Revel Horwoods agreed. 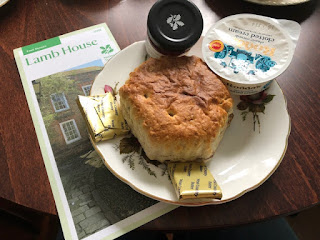 Frankly, I think the National Trust got away very lightly when I designated myself the authority on NT scones. I'm a pussycat compared to the others out there.

I do like a bit of skulduggery and intrigue at my National Trust properties. If you read the Wikipedia entry for Nunnington Hall you'll find a mysterious little factoid; "Another feature of the garden are the resident peacocks. On June 10th 2007, Bluey, the head of the peacock family, died in suspicious circumstances."

My imagination ran riot with this piece of information. Was he done in by another peacock? Poisoned by a crazed fan of a rival tourist attraction? Or did he end his own life, consumed with low self esteem because he hadn't been given a very imaginative name? 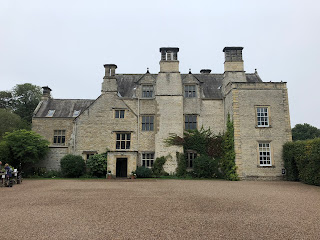 But it wasn't suicidal peacocks I was looking for today. This trip to Yorkshire was an emergency; my last five missions (to Brockhampton, Fyne Court, Coleridge Cottage, The Firs, and Dyffryn Gardens) were all very lovely, but none of the scones was top class. I was getting worried. I needed a five star scone.

In fact, Nunnington Hall itself turned out to be a nice little place and definitely one of those NT houses that you could live in. Here's some history:
The Nunnington scone
But let's move on to the scone. It started well. The tea room is in the house and it's table service, which is quite rare - Goddards, Lyme, and Rufford Hall are the only others I can think of that come and take your order. There's also a really lovely tea garden but it was tipping it down with rain so I stayed indoors. 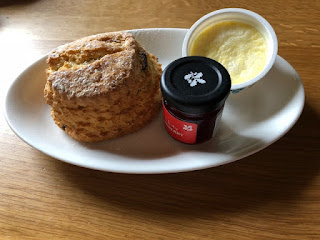 Reader, it was stunning. It was light as a feather and fresh as a daisy. I cannot tell you how relieved I was to finally be back on the five star track.

I was so excited by the scone that I forgot all about Bluey the peacock and his untimely demise. Luckily, I was reminded by one of his peacock crew, presumably called Greeny or something, who was pecking about on his own looking for clues. 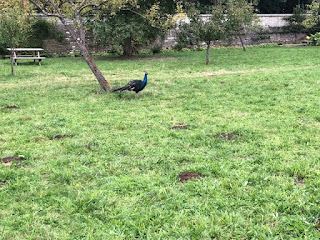 Nunnington Hall: 4 out of 5

Scone: 5 out of 5
Peacocks: My success in solving the mystery of Bluey's murder: 0 out of 5

Posted by National Trust Scones at 00:57 No comments: