If the National Trust rang me tomorrow and said "Scone Blogger, which property should we use as a shining example of how to run a highly unique yet extremely visitor-friendly destination?" I would say "I am glad you asked me that, National Trust, because I went there yesterday. It is South Foreland Lighthouse near Dover."

South Foreland Lighthouse is the best-run National Trust property I have seen in a long time. You have to work for it - it's a 40 minute walk from the White Cliffs of Dover Visitor Centre, although there's a minibus on Sundays - but it's 100% worth the effort. 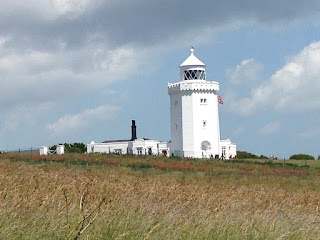 What's so good about it?

Fantastic Tour Guides
The volunteer that led us around the lighthouse was called Martin and he must be a serious contender for National Trust Tour Guide of the Year. He was brilliant. If you had told me this morning that at 1pm I would be listening enraptured to a man explaining the traffic patterns of the Strait of Dover, I would have thought you were mad. When I win the lottery I am going to offer Martin a job following me around explaining things; "Martin, how has Greece ended up in this financial pickle?" "Martin, how can I delete people on Facebook without them knowing?" "Martin, why is Katie Hopkins so horrible?" etc. etc. He could make anything sound interesting, I reckon.

He told us that the lighthouse was decommissioned in 1988 and Trinity House (who run our lighthouses) insisted on taking out all the apparatus because they weren't 100% certain that the National Trust wouldn't switch it on one day and cause mayhem among the ferries in the Channel. It was put back in eventually and the light was turned on for one night only for the jubilee in 2012. Apparently the ferries were tooting their horns as they went past. Brilliant.

Other facts about the lighthouse:


Quirky, Well-Run Tea-Room
The tea-room at South Foreland is called Mrs Knott's and it is LOVELY. It's in the old lighthouse keeper's cottage - the Knott family had been lighthouse keepers for many generations, hence the name.

It's done up to look like a 1950s house and they serve the tea in an array of teapots that they've either picked up in charity shops or that have been donated. It's proper tea with a strainer as well. It's a brilliant idea. 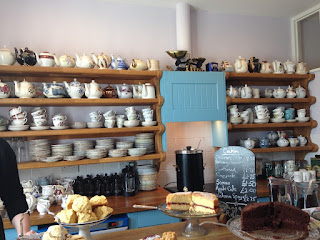 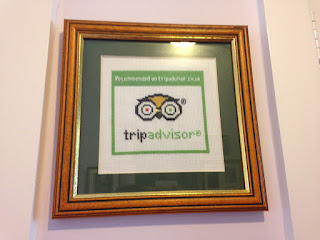 The South Foreland Scone - Perfection
I suspected that South Foreland might be a happy hunting ground for the Scone Blogger, because they have a scone recipe on their web page.

However, even in my most optimistic dreams I could not have hoped for a tastier scone. It was absolutely delicious: 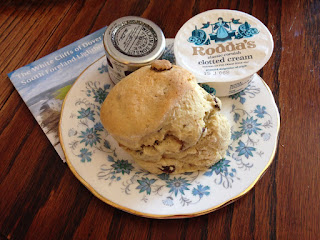 (I must add here that a cream tea at South Foreland actually came with two scones, but as I had just eaten 1.5 scones at the White Cliffs of Dover visitor centre, I was unable to even order the full complement, never mind eat it.)

So I think you've probably gathered that I was quite impressed with South Foreland. It's a fantastic place and the staff and volunteers are a credit to the Trust (especially Martin - Martin, I'll be in touch when my numbers come up).