Peckover House in Wisbech was built in 1722. Sometime after 1794, it was purchased by Jonathan Peckover. How amazingly lucky he was, I thought to myself, to find a house with the same name as him. But don't worry, folks; the penny dropped before I said that out loud - I'm sharing it here as we're all friends and you won't tell anyone.

In fact, Peckover House only became Peckover House when the National Trust took it over in 1948. Before that it was known as Bank House, for reasons that will become apparent.

Here's what I learnt today at Peckover:

1. The Peckovers were Quakers
Jonathan Peckover was descended from Edmund Peckover, a soldier in Oliver Cromwell's army. Edmund became a follower of George Fox in 1655; Fox had established a Nonconformist religion, the Religious Society of Friends, otherwise known as Quakers.

Quakers believe that religious faith is a personal matter between the individual and God, rejecting the need for clergy or rituals. Known for their commitment to social justice, their teetotalism, and for fighting the fight against slavery and war, many well-known businesses were set up by Quakers, including Cadbury, Rowntree, Barclays, Lloyds, and Clarks shoes.

2. The Peckovers were bankers
Jonathan started out as a grocer but soon began holding onto his customers' cash for safe-keeping (at their request, I hasten to add). His bank had just seven accounts in its ledger in 1782 but it grew and survived many financial booms and busts until it was subsumed into Barclays Bank in 1896.

Peckover House was home to the bank until 1879, when it moved to new premises nearby - and that building is still the Wisbech branch of Barclays Bank today.

3. Banking was a heavy old game
This is one of the ledgers from the bank. I'll never complain about Microsoft Excel again.


4. Banking was also a bit of a dangerous old game
The man-trap shown below is also on display at Peckover. It would have been positioned in the gardens outside the house during its days as a bank. If a would-be robber tried to gain access, the trap would have grabbed them. There was also a blunderbuss that would have been used to fend off highwaymen who attacked the bank's staff and funds. Banking was not for the faint-hearted.

Believe it or not, this is a humane man-trap - as Quakers, the Peckovers would not have condoned the use of a device that maimed or even killed a burglar that walked into it. Not sure if/how they got around using the blunderbuss. 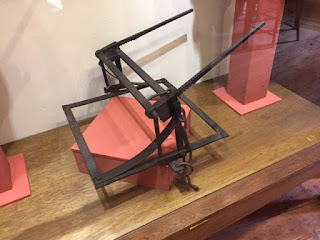 Peckover House goes straight into that Top Five. It feels so homely and comfortable with a huge amount of light. I'll start packing.

(If you'd like to know the other four properties in the Top Five National Trust Houses I Would Move Into Tomorrow If the National Trust Would Let Me: Hughenden, Sunnycroft, and at joint number one: Goddards and Bateman's. Let me know yours - when I finally get round to setting up a Sconepal AGM, this will be the subject of the first debate.)

6. Peckover scones are bloomin' excellent
My sister has now done several scone expeditions with me and so she has picked up my dread that the scones will have run out by the time we get there. And it was a very really fear today; we didn't get to the tea-room until 4pm.

But we needn't have worried; there were plenty of scones AND THEY WERE WARM. They were light and fluffy inside and slightly crisp on the outside - a complete triumph and worthy of a unanimous 5 stars. 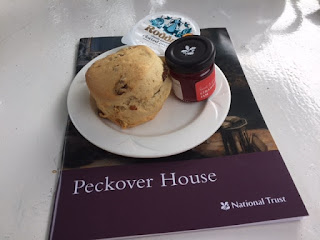 I'll end by praising the surprising loveliness of the town of Wisbech. I grew up in the Midlands, but for some reason we had to watch Look East and other East Anglian news programmes. Wisbech was always getting a mention, along with Felixstowe and other places that might as well have been on the moon for all I knew of them, so I took against them a bit and have harboured that irrational dislike for about 40 years. And now I go and visit them and think "THIS IS A LOVELY PLACE! Why was I not told about this? Pah!"

ALSO, for all you National Trust fact-fans, Wisbech was the birthplace of Octavia Hill, one of the founders of the National Trust! So there you have it.

Posted by National Trust Scones at 07:00