I've worked out that I've consumed around 113,900 calories so far on this National Trust Scone Odyssey (obviously I will be deleting this post before I ask BUPA to pay for the heart bypass).

So I was very excited to be heading for the great outdoors today for my visit to Kinder, Edale, and the Dark Peak. I had it roughly planned out as follows: walk up hill singing Valderee! Valdera!, eat scone on top of hill Heidi-style, return down hill in triumphant calorie credit. 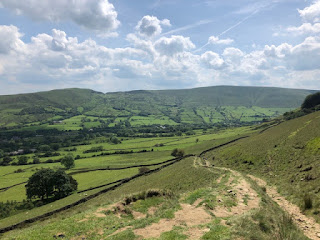 I also realised that, as the name of the property suggests, I was actually visiting several different things:
When I got off the train at Edale, I discovered that the very lovely Pennypot Cafe, owned by the National Trust, was right next-door to the station. Kinder Scout, on the other hand, was not.

It's about a 70 minute walk from Edale to Kinder Scout on the Pennine Way and I hadn't allowed enough time for a full circuit. So I did my best: I huffed and puffed up half a mile, took in the marvellous views, and then picked my way back down while being overtaken by 800 nine year-olds. 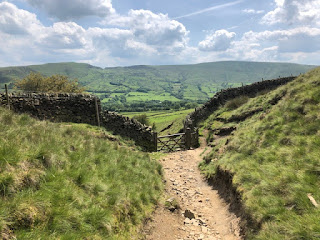 If I had been a bit more organised, I could have retraced the steps of the Kinder Trespass, which took place in 1932. I had heard of the Mass Trespass but I hadn't realised that five men went to prison for it.

Luckily I had bought a book before my expedition called The Battle for Kinder Scout and that helpfully shed some light on events:

There has always been debate about the Trespass - even at the time a lot of ramblers' associations disapproved of it - but it arguably led to the creation of our National Parks in 1949, after which the Pennine Way and other long-distance footpaths were established.

But let's go back to the beginning and my encounter with the Pennypot Cafe. The first thing you need to know about the Pennypot Cafe is that it offers the friendliest and most efficient service that I have ever come across at the NT. The guys that were running it today were brilliant. It also has very good music.

The second thing you need to know is that the scones are very good. They had three types on offer: Apple & Walnut, Apple & Raspberry, and Cheese & Chive.

I plumped for the Apple & Walnut and sat in the outdoor courtyard with a friendly little robin who accepted my offer to share the scone. It was very tasty (the scone, not the robin). I was convinced that the loose leaf tea was going to be a fail as it was a weird colour BUT NO - it was really refreshing and went down a treat. 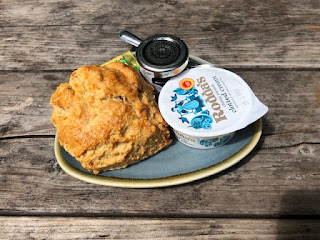 Before my trip today I had decided to consider a future career as a hill/mountain walking fan when I finish the National Trust Scone Odyssey (don't pop the champagne corks just yet, folks; I still have 60-odd places to go) as it will offset six years of clotted cream. After today, I'm not sure it's going to be an easy transition.

(If you want further examples of previous Peak District failures, you can read about my trip to Longshaw, Burbage, and the Eastern Moors).

Kinder, Edale, the Dark Peak: 5 out of 5 for the views and the loveliness of Edale
Scone: 5 out of 5 (0.5 for the fantastic service and Tom Petty/Stevie Nicks soundtrack)
Chance of seeing enough of the area in two hours: 0 out of 5

Posted by National Trust Scones at 13:27