I decided to go to Polesden Lacey in Surrey today because it was open. A lot of National Trust properties are closed from October, but I'm not going to moan about that. If the National Trust tells me that listed buildings need a winter break, a bit like Italian footballers do, then I believe them.

We arrived at Polesden at 11:07am, which means that the place had been open for the grand total of seven minutes. But it was MOBBED. I soon worked out the reason for this - Polesden goes BIG on Christmas. There was (in order of importance to your correspondent) mulled wine, a children's choir, Christmas lunches, letters to Father Christmas, and a sleigh ride led by these two magnificent reindeer (ahem): 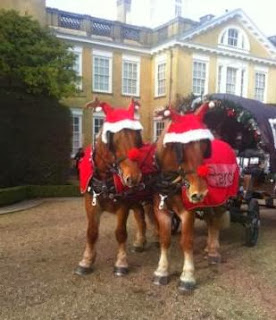 The Polesden Lacey scone
The mobbedness might explain why the tearoom only had two scones left. Again, you won't find me complaining about this, because two scones are a whole lot better than no scones, as I discovered at Bath Assembly Rooms on my last expedition.

However, the scones didn't look all that appealing. Is it actually possible to bake a batch of scones and sell them all in under seven minutes? Or were these two left over from yesterday? But worry not, scone-fans, because they turned out to be absolutely delicious. I think they'd used currants for the fruit, which gave a lovely burnt-sweet taste. I was only sorry that one scone was my lot (I had to share with my sconeing companion, otherwise he'd go on strike). 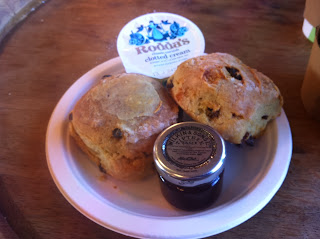 Now, I don't know about you but I love National Trust properties that have an individual story attached to them, especially when that individual is a bit colourful. Polesden was bought in 1906 by Margaret Greville and her husband Ronald. She eventually bequeathed it to the Trust and it is presented today as she had it in her heyday as an Edwardian society hostess.


Margaret was an interesting sort. Here are some snippets about her:

1. Margaret was the "natural" daughter of William McEwan, the millionaire Scottish brewer. This is a polite way of saying that she was illegitimate but it turns out that her parents did get married in 1885, when Margaret was 21. I have no idea how society viewed this at the time, because it doesn't sound like the kind of thing that went down particularly well with the Victorians, but it certainly didn't stop her hobnobbing with the great and the good in later life.

2. Mrs G loved her royalty. Visitors to Polesden included Edward VI and George V, and the future George VI and the Queen Mother spent a bit of their honeymoon there.

3. The Queen Mother loved her, describing her as "so kind and so amusingly unkind".

4. The Queen Mum wasn't the only observer of Mrs G's less charitable side. According to the guidebook, a diarist called Chips Channon wrote that "no-one on earth was as skilfully malicious as old Maggie".

5. If you had had the pleasure of being entertained by old Maggie, chances are that at some point she would have shown you one of her many trinkets - something excruciatingly expensive from Faberge perhaps - and told you how dear, dear Albert had insisted she accept it in gratitude for her marvellous hospitality. If you then went away and bought her something similar, you'd probably get invited back. If, like me, you thought "oh do shut up, you name-dropping old bag" then you probably wouldn't.

6. And just to make me like her even less, she apparently left her jewellery and money to Princess Margaret and other royals, as if they needed it. However, she did leave the estate to the National Trust, so we thank her for that.

But even though I didn't really warm to old Mags Greville, I highly recommend a visit to Polesden - it's a truly beautiful estate with amazing views of the Surrey Hills, and the Trust make a big effort to decorate the house and give a taste of an Edwardian Christmas: 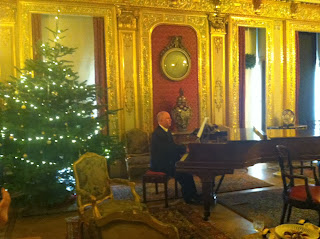 Polesden Lacey: 4.5 out of 5
Chances of me and Mrs Greville being chums: 0 out of 5
Posted by National Trust Scones at 14:08