I was looking through the National Trust handbook one day and I came across a picture of Lyveden New Bield in Northamptonshire. I was completely taken aback, not by its lack of roof, but because I knew instantly that it was the work of Thomas Tresham.

This was shocking, because me being able to tell you who designed a building just by looking at it is akin to Miley Cyrus being able to recite The Ancient Mariner or tell you about the finer nuances in the works of Proust. I know NOTHING about architecture.

I recognised it because I grew up in a town with a Thomas Tresham building - it was the town library when I was little. The Treshams were fascinating people:
I decided to take some Northamptonshire Catholics along to Lyveden, namely my mother and my sister. If you've ever watched The Royle Family then you'll have some idea of what this was like, as I am basically related to Denise and Barbara Royle. But they'll be really upset with me for saying that, so I better not elaborate on the 578 examples I have to hand of them behaving thus.

I regretted my choice within 30 seconds of arriving. "There it is!" I said happily on seeing the roofless Lyveden in all its isolated splendour, to which Denise Royle replied "How do you know that's it?". So I pushed her in the moat.

The Lyveden scone
The tearoom at Lyveden is relatively new but it is quite possibly the nicest National Trust tearoom in existence. Cosy doesn't even begin to cover it - the log burner was a sight for cold limbs, and the waitress service was really efficient and friendly. There was a choice of plain or fruit scone, the jam tasted home-made and was delicious, and the scones were really tasty, as was the tea. Well done, Lyveden. 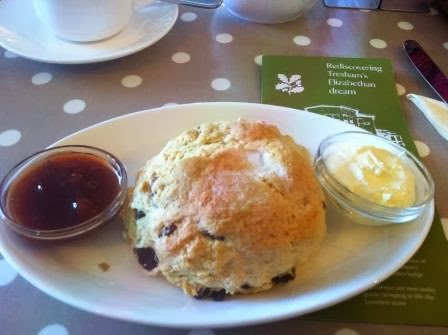 Lyveden itself scores top marks for a) being fascinating b) having Robert, the most helpful man ever, manning the visitor centre and c) providing a free audio guide. My love for audio guides at National Trust properties knows no bounds (see also Petworth and Osterley House) and I appreciated it today more than ever.

Work started on Lyveden New Bield in 1594. As well as being a dead-ringer for Edmund Blackadder, Thomas Tresham was a generous host (too generous it would seem; he died heavily in debt, although having to pay fines left, right and centre to get his treason-magnet son out of bother didn't help) and the new building was to be a garden lodge for entertaining. He died in 1605 and work on New Bield ceased, although his wife, Muriel Throckmorton, continued to use the property (it's rumoured for worship).

During the Civil War, Lyveden was seen as a Papist abhorrence and was pillaged for building materials. However, somehow it remained pretty much in tact and has miraculously remained so for over 400 years. 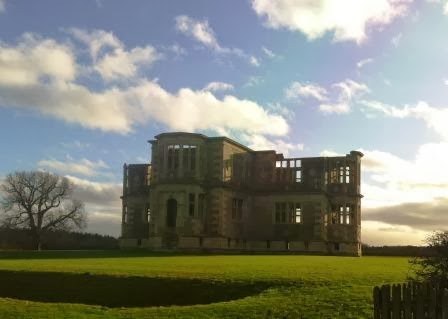 So as you can probably gather, I loved Lyveden and would highly recommend it and its wonderful tearoom.

Email ThisBlogThis!Share to TwitterShare to FacebookShare to Pinterest
Labels: Northamptonshire